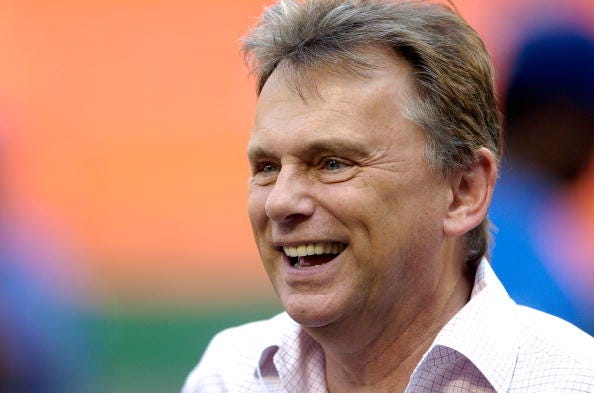 “Wheel of Fortune” host Pat Sajak is on the mend.

Sajak was just spotted on his first public outing three weeks since having emergency surgery for a blocked intestine. Wearing a red Washington Capitals zip-up and a black cap, Sajak was seen enjoying the Capitals hockey game on Friday.

Glad to see Caps superfan @patsajak out and about and rocking the red today! https://t.co/pRVNXj49gg

NBC Sports Washington’s Craig Laughlin said during the game, “Always great to see Pat around the arena. Loves his hockey. He’s getting better. He says the worst has passed, Joe B, after that surgery so well wishes to Pat and the family.”

The day before, Sajak took to Twitter to reveal that he was having a good time with his family.

He jokes about having discussed politics like, “Who votes for more cranberries,” as well as gender issues like, “Is that a boy bird or a girl bird?” “Hope you’re having a good one, too!” he wrote.

At our Thanksgiving meal today we discussed politics (“Who votes for more cranberries?”), gender issues (“Is that a boy bird or a girl bird?”) and climate change (“That oven is making it warm in here!”). Hope you’re having a good one, too!

Vanna White stepped in as host in Pat Sajak’s absence. The final episodes featuring White as the host will begin airing on December 9.

On November 11, Sajak updated fans on his health on Twitter, writing, “I’m so grateful for all of the good wishes during my recent illness. Happy to say that the worst has passed, and I’ll be out of the hospital in a day or two, then back to work.”

I’m so grateful for all the good wishes during my recent illness. Happy to say that the worst has passed, and I’ll be out of the hospital in a day of two, then back to work (unless @TheVannaWhite has completely taken over!)