Rihanna stole the show at her Diamond Ball charity event on Thursday night, and she even snuck in a few moments to talk about who she’d play if she were cast in Batman.

Rihanna has been giving off major Batman vibes recently. Between rumors that she would star in the new movie as Poison Ivy and her sleek, black looks, the Batman energy is through the roof.

Thursday night, she rocked a black, skintight Givenchy gown, and people were quick to point out the similarities. “I didn’t even think about that,” Rihanna admitted to Extra. “But I’m into it,” she continued. 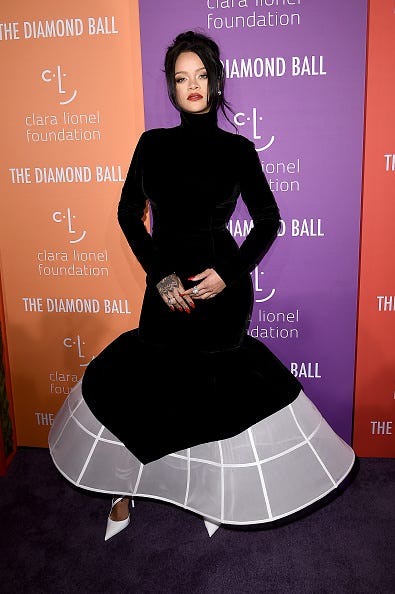 Rumors began circulating this week that Rihanna would star as Poison Ivy in the new Batman movie. When asked about starring in the film, Rihanna responded, “I would always wanna play Poison Ivy.”

This isn’t the first time Rihanna has owned the Batman franchise looks. She posted to Instagram on Sunday to show off her shoes. The elaborate video showed the high-heeled boots from all angles, being sure to capture the silver detailing and pointed look.

The caption? “Bat-mobile, but make it fashion! Get into this matte leather-fusion tho,” Rihanna writes.

Fans are eager to see what other Batgirl looks Rihanna will turn.