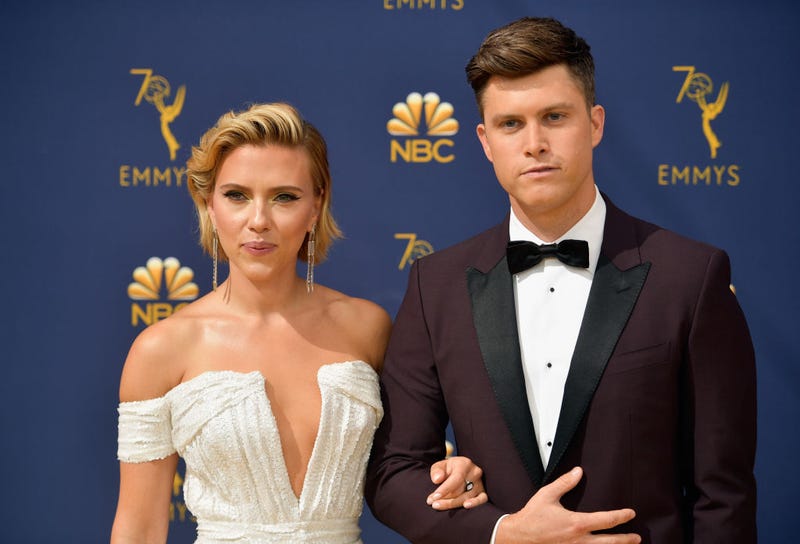 Scarlett Johansson razzed, then got sweet with Colin Jost on Saturday night.

The "Marriage Story" star was the host of "Saturday Night Live" where she hugged and kissed her fiancé Colin Jost. The actress thanked the show for introducing her to “the love of my life.”

This has been the sixth time the actress has hosted the show. She referred to her partner in the beginning of her opening monologue.

“[If] the show’s bad, what are they going to do, fire my fiancé?” she said. “Oh no, what will we do without his paycheck?”

Jost joined the “Avengers”-themed skit in the monologue. Johansson pretended to be too wrapped up in an attack by Thanos to care that her fiancé was there.

The full SNL cast joined her onstage with Jost ahead of the others to stand beside her.

“I just wanna say that this place means so much to me, I have so many friends here  and I met the love of my life here,” she said.

In the video you could hear the audience cheering when the couple hugged and kissed. Both did it again at the end of the show.

Earlier in December, Johansson got real about her former marriage to Ryan Reynolds. She discussed the things she learned in that marriage just in time for the release of her new Noah Baumbach-directed movie, "The Marriage Story."

In an interview with Vanity Fair, the actress shared details about her three-year marriage to Ryan Reynolds. She explained to the magazine that she was not prepared at the time for marriage.

“The first time I got married, I was 23 years old,” Johansson said. “I didn’t really have an understanding of marriage,” she added. “Maybe I kind of romanticized it, I think, in a way.”