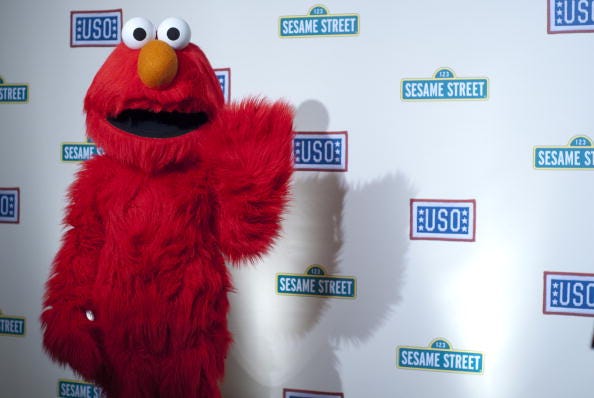 Late-night television is going to get a lot more ticklish.

Sesame Workshop, the producers of “Sesame Street,” have announced they are launching a new late-night talk show hosted by none other than Elmo, according to The Wrap.

Taking aim at the likes of Jimmy Fallon and Jimmy Kimmel, the lovable red puppet will interview celebrity guests on the new program called "The Not Too Late Show with Elmo.” While the show is set to go into production next month, an air date has yet to be announced.

We are proud to announce a new 5-year partnership with @WarnerMediaGrp that includes five new seasons of Sesame Street. As part of this partnership, Sesame Street will now premiere on #HBOMax. The show will also continue to air on PBS KIDS for free. More: https://t.co/Yd59Yd2C3Y pic.twitter.com/4T10Vt1vaW

The show is a part of an overall deal with the new streaming service HBO Max and includes airing the next five seasons of “Sesame Street.”

The popular children’s show will first screen on the pay service before becoming available for free on PBS.

In addition to Elmo’s new gig, there will also be two new animated series. While one has yet to be revealed, the other is a “Sesame Street” spin-off tentatively entitled “Mecha Builders,” which will feature popular characters from the children’s show in robot animation style.

🎶 Sunny days, sweeping the clouds away with @andygrammer 🎶 #ThisIsMyStreet

And get ready to go down memory lane, because the HBO Max deal will also offer “Sesame Street”s extensive library of episodes spanning the last 50 years, some of which will be available for the first time ever..

Fans can still continue to watch “Sesame Street” on its current home of HBO until it officially moves over to HBO Max in spring 2020.