Teresa Giudice was spotted on a morning walk with an ex-boyfriend amid her split from husband of 20 years, Joe Giudice.

The pair, who dated in high school, were on their way to breakfast.

Teresa Giudice Cuddles Up to Her Ex Days After Split from Estranged Husband Joe https://t.co/HLAPZXowNb

The picture shows the two huddled for warmth on their winter stroll. Delorenzo has his arm around Teresa, who is bundled in a black puffer coat, black denim and lace-up boots.

Delorenzo had previously appeared on the Bravo reality show this season.

Giudice’s lawyer, James J. Leonard, declined to make a comment to the publication. 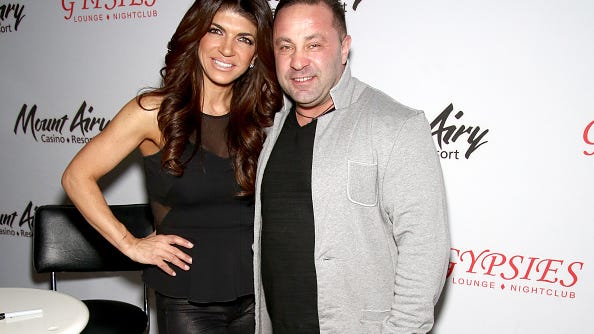 Teresa and Joe Giudice Split After 20 Years of Marriage: Reports

Even through the split, Teresa and Joe seem to be on good terms.

The same day that she was spotted with her high school flame, Teresa commented on an Instagram post by Joe, saying that his “beard looks good.”

Last week, it was reported that the couple was splitting after 20 years of marriage.

A source close to the family told People that Joe and Teresa “have been separated” since the family's recent trip to visit Joe in Italy.

Joe, 49, seemed to confirm the report in an Instagram post which has since been removed: a side-by-side photo of the two captioned “It’s time to let go.”

The source did say that the split is amicable, telling People, “Joe has been out on a few dates, Teresa has not. She has been too busy with the girls, with work obligations and taking care of her father. She is happy for Joe. They have been very friendly with one another and are very supportive of each other’s happiness.”

The split hasn’t been the biggest shock to some of the couple’s peers, including current "RHONJ" cast members Dolores Catania and Jennifer Aydin.

“I think they’ll always be together to some extent but not as husband and wife,” Catania told Ashlee Malleo on her RADIO.COM original podcast “Making It Up As I Go…”