Gwen no doubt celebrated with her boyfriend of over four years, Blake Shelton.

On Monday's episode of "The Voice," Stefani explained her surprising dynamic with Blake while commenting on the unexpected chemistry between two of her battlers.

"The contrast in the duet is working amazingly," Stefani told baby-faced Tiara Brown and older earthy Royce Lovett. "It's like me and Blake: We do not seem like we would be together, but yet we go together perfectly. It's like this weird contrast."

Since taking their relationship to the next level after meeting while working on “The Voice,” the pair have been nearly inseparable and adorable.

While they may lead a glamorous life in front of the cameras, the musical lovebirds are pretty down-to-earth when it comes to the things that matter most.

When not hosting a successful NBC show, touring the world or hitting up A-list red carpets, here are six ways Gwen and Blake are just like us.

Gwen and Blake aren’t bashful about kissing in public, even if it’s an awkward Valentine’s Day smooch. Say cheese!

They get goofy on their birthdays

When Blake turned 40 in 2016, he celebrated by throwing on a pair of giant birthday cake sunglasses. Everyone’s entitled to get a little shady on their big day.

Gwen is known for her stellar dance moves. Blake? Not so much. But make it a Boomerang and everyone wins.

Earlier this year, Gwen used her Photoshop skills and morphed an old pic of herself with one of Blake to make it look like they knew each way back when. Besides being amazing, it’s further proof that the ‘80s were kind to no one!

It’s tropical and chill night at the Stefani-Sheltons. Seeing Gwen and Blake hanging on the couch in similar Hawaiian print tops is the epitome of couple goals. Aloha! 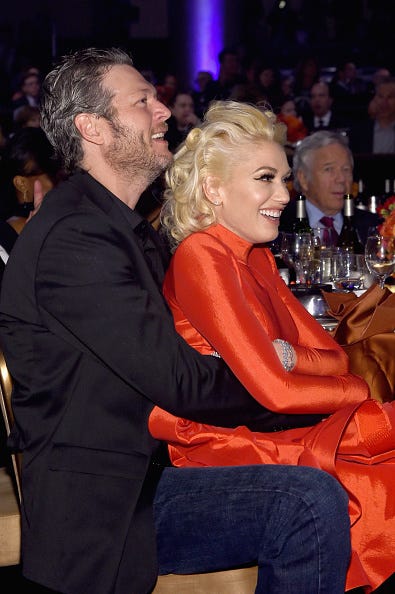 In 2016, Gwen and Blake didn’t let a star-studded Pre-GRAMMY bash stop them from getting all cutesy at their table. With arms entwined, Gwen nuzzled on Blake’s lap as if they were the only ones in the room watching the likes of Carly Simon perform. Nobody does it better, indeed!