Let’s be honest, this year we’ve all leaned into activities and hobbies that are sure to make us feel comforted. We’ve baked loaves of bread, we’ve walked countless miles around our neighborhoods, taken on at-home beauty and grooming routines, and participated in Zoom happy hours a-plenty. But the one constant that has provided us all with solace, endless possibilities, dynamic storylines, and a break from monotony has been music.

Listen to RADIO.COM's 2020 Most Played now on RADIO.COM.

This year, as it felt like the world stopped spinning, music was the one thing that didn’t seem to stop “spinning.” Our favorite artists worked their hardest to continue to release new music and provide us with an auditory escape from reality, even when live performances were not an option. Pop stars like Dua Lipa still gave us addictive tunes that helped transform our homes into 70s inspired, mini “Studio 2054s.” Country artists such as Maren Morris uplifted and endured the days to show "The Bones" are still good, and we proved to still be a "Sucker" for artists like the Jonas Brothers and Maroon 5.

With a ton of excellent new music coming out in 2020, it offered RADIO.COM stations plenty of choices for what to play. Every time you hear a song on your favorite RADIO.COM station or the RADIO.COM app, that gets tallied as a spin. We track every single spin across our vast network of stations, which allows us to look back at the end of the year and see which artists were the most played in 2020.

We have done the math to bring you a closer look at the artists who rocked us, inspired us, and ultimately distracted us in a, say it with us, "unprecedented year." Join us as we countdown our top ten most played artists here at RADIO.COM and celebrate their achievements in a year that made accomplishing anything feel like a feat of strength. RADIO.COM presents our 2020 Most Played. 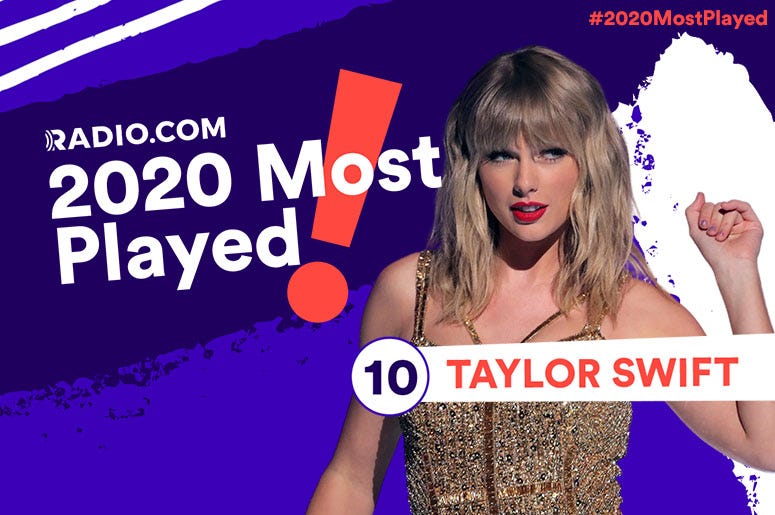 The surprise release Queen! This year Taylor dropped folklore and evermore on us and barely made a peep before each, and no we definitely cannot stop singing “cardigan.” While she’s always sprinkling mysterious hints through her music, leaving Swifties to put together her puzzle pieces, the one thing that is for certain is that Taylor decided to provide a lot of joy through music in a time when we all needed it most. While 2020 was a bad year for pretty much everything, the one thing 2020 gave us was a plethora of important music. Taylor’s folklore and evermore are certainly two pillars that propped us up during a year when music was one of the only things we had. 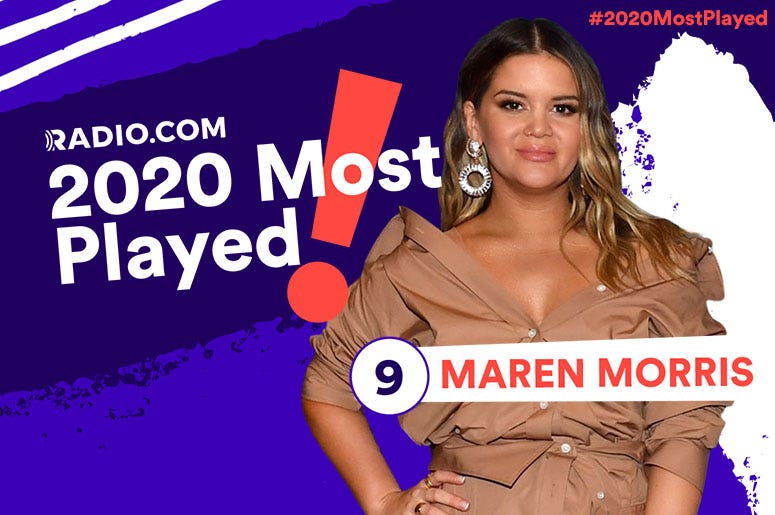 This year Maren Morris gave us a single inspired by the Black Lives Matter movement, immigration inequality, the fight for justice for Dreamers, and the various divisive issues that America faces every day. “Better Than We Found It” transcends the typical topics that Country music usually touches upon. The musical moment is dedicated to her son, who was born “the year the world stopped turning.” Maren Morris will always be one of our favorites because she fearlessly takes the Country genre to places that it never explored before. Calls to action to intimate accounts of her relationship to rallying cries for fierce females everywhere - 2020 could barely contain Maren, and we love it. 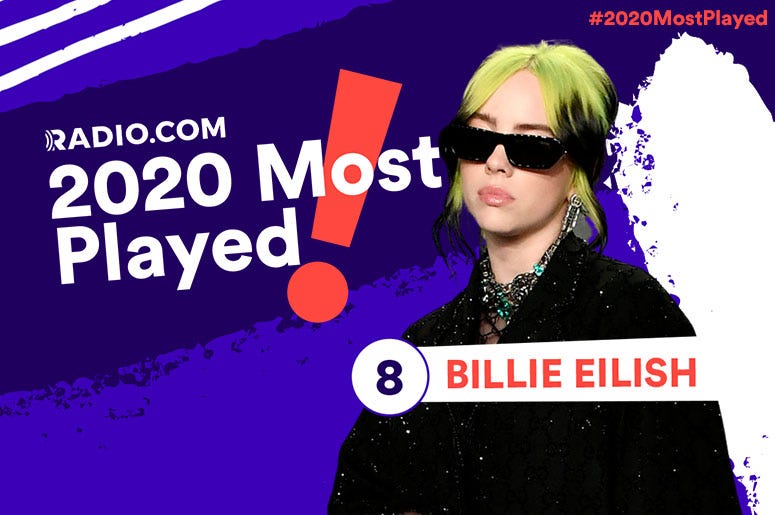 She’s our future. Billie Eilish is a force to be reckoned with and she has proved it with multiple GRAMMYs under her belt and four nominations for next year's ceremony. She’s the hardest working teenager we know. The “Therefore I Am” singer deserves the heavy rotation she receives. This year the artist released three singles and has shared that she has sixteen more songs on the way, of which she says, “I love them all.” 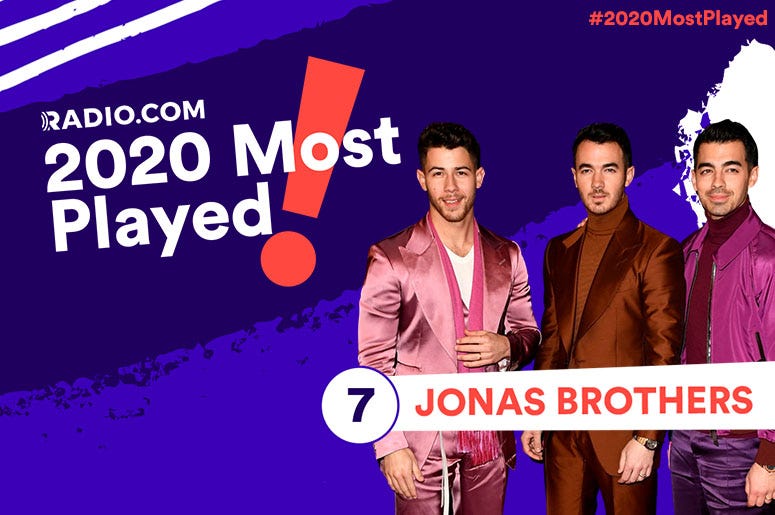 Leave it to the Jonas Brothers to give us a full-blown, interactive, digital tour even as the world is stopped. Because the JoBros couldn’t take the stage this year, the brothers decided to give back to their fans with a fully interactive and immersive concert, where fans got to curate the show. Aside from making the most of digital experiences, Nick, Joe, and Kevin stay “Burnin Up” on our stations, particularly after reigniting their music last year and getting the band back together. Once a "Sucker" always a "Sucker" for this trio. 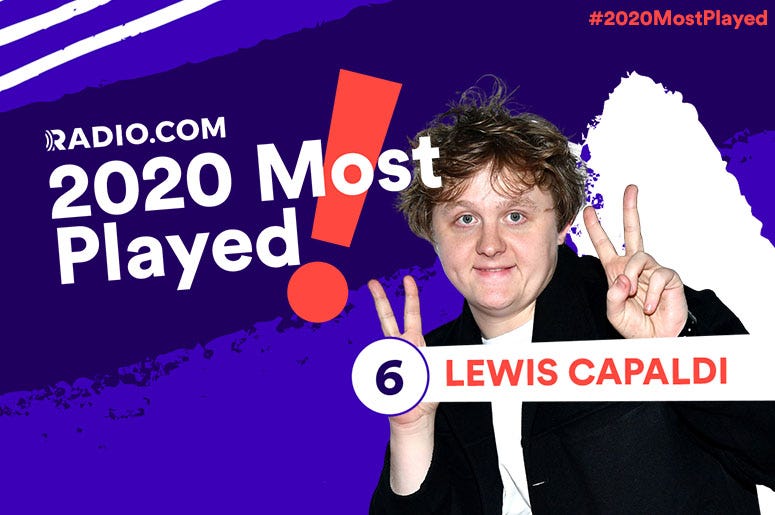 Lewis Capaldi exploded on to the scene in 2019 and ever since then he’s been spinning away here at RADIO.COM. We can’t get enough of the guy that continues to melt our hearts. In 2020, “Before You Go” continued to grow, as well as other anthems from his debut that gave us strength to keep going. 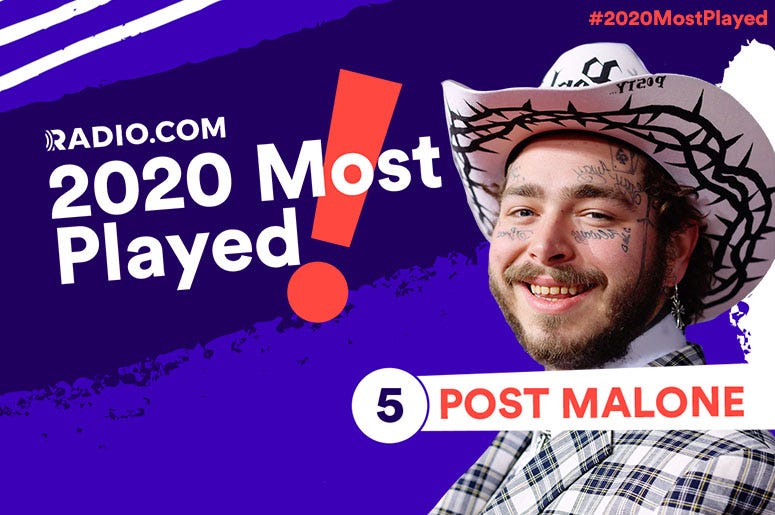 Well as you all know “Circles” and “Sunflowers” are two of our absolute favorites, so of course Posty kicks in at the number five spot on our list. While Post didn’t drop new music this year he joined Ty Dolla $ign on his track “Spicy” in 2020 and of course, accompanied Tommy Lee and Tyla Yaweh on an absolute banger, "Tommy Lee." But there was plenty of Post Malone to be heard from his GRAMMY-nominated Hollywood's Bleeding LP as he was hard at work releasing his own “fancy” rosé line this year. 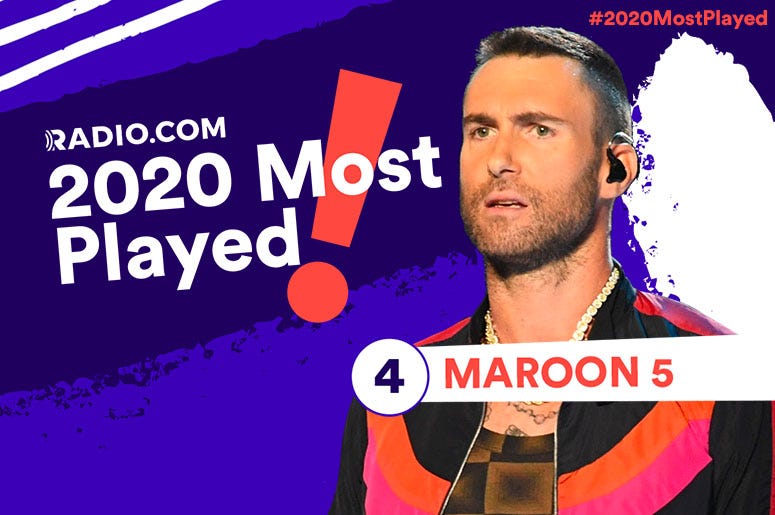 Ahhh, Adam Levine, a radio mainstay! This summer Maroon 5 gave us “Nobody’s Love” and left us foreshadowing whether there might be a new album on the way. However, as we anticipated new music, of course, we were still listening to instant classics like “Girls Like You” and "Memories." 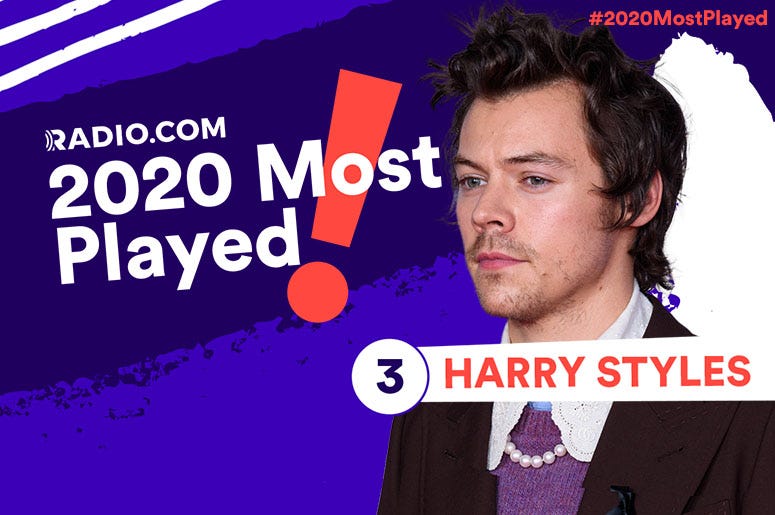 The man who has redefined “manliness” and dropped an album last December that made for the perfect summer soundtrack along the way. Styles kept us “Watermelon Sugar" high all summer long and while his music was blasting through our car speakers, he was gracing the cover of Vogue as the first male-solo cover in the history of the publication. P.S. did you hear he wore a dress!? 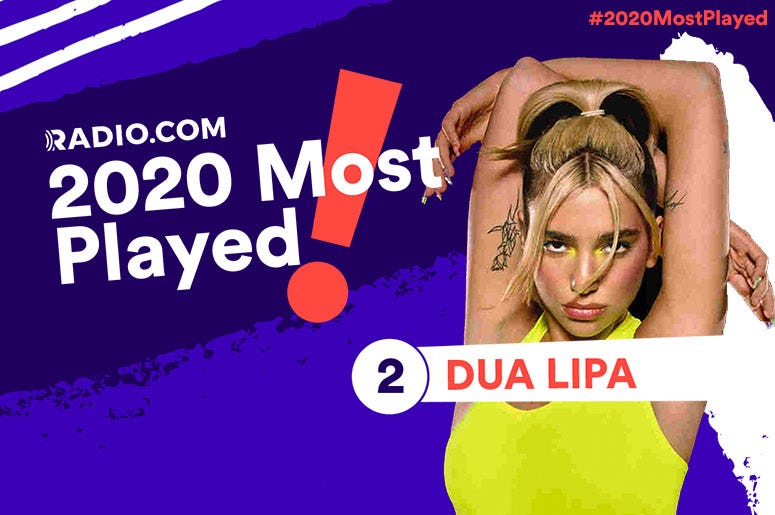 Dua Lipa, aka the newly crowned, modern disco Queen of the 21st century has literally not stopped this year. From the release of Future Nostalgia to the remix sister album, Club Future Nostalgia, to an entire hour-long, visualizer that goes hand-in-hand with Club Future Nostalgia, to her massive “Studio 2054” live-stream event. There is a reason why the “Break My Heart” singer has been keeping us all in groovy spirits across all the RADIO.COM Pop stations. Dua Lipa really decided that she wasn’t going to let a global pandemic keep us from dancing… even if it was on the at-home dance floor. 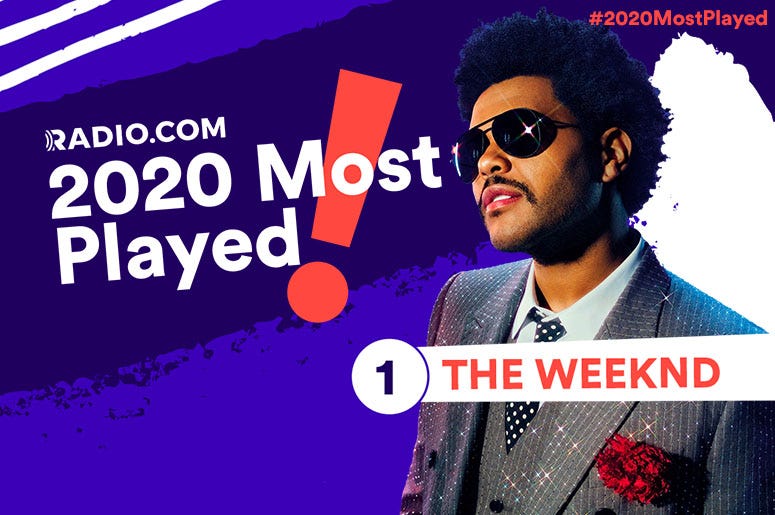 It’s honestly no surprise that The Weeknd rolls in at number one for us. “Blinding Lights” has been stuck in our heads since After Hours dropped in March, almost exactly in line with when most of the world went into lockdown. Despite the massive societal shift this year, the singer has swept us all up in the latest chapter of his woozy, unstoppable R&B voyage. Along the way he claimed Video of the Year at the 2020 VMAs and snagging Favorite Album - Soul / R&B at the 2020 AMAs…just to name a few. The Weeknd will forever be number 1 in our hearts. Anything else, would be "Heartless."