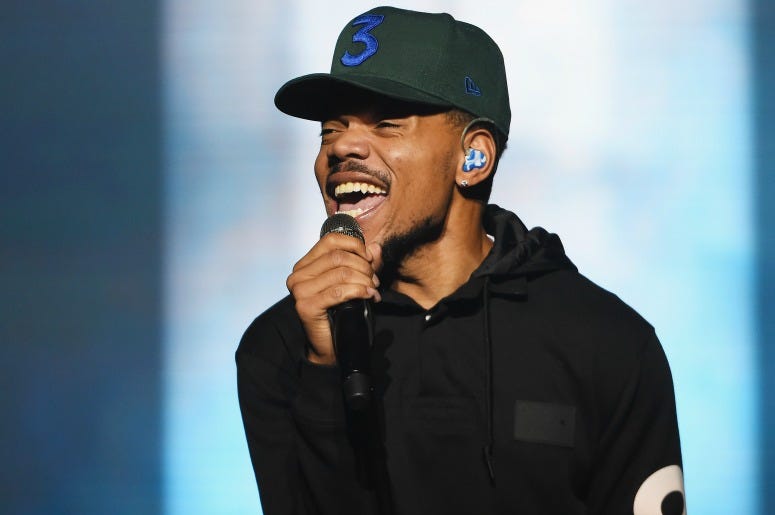 The Big Day arrived a little bit later than scheduled, but it lives as large as promised. The GRAMMY winner’s debut album is a celebration from the 26-year-old, featuring joyous jams on marriage, family and faith.

It also features a ton of features, with Chance recruiting familiar friends and new collaborators to round out his official entrance into the album game. Megan Thee Stallion and Nicki Minaj add some extra spice, while Ben Gibbard of Death Cab For Cutie and Shawn Mendes are effortlessly woven into this total experience.

A late entry into the summertime soundtrack race, The Big Day plays like a backyard party or perhaps a wedding reception in Chance’s case. Filled with energy and love, but pausing at the proper moments for sincere sentiment, The Big Day is pouring positivity out of almost every seam.

After a few days to swim around in Chance's debut album, it feels like in instant classic. These are our favorite lyrics from each song on The Big Day.

The party starts strong with a soulful assist from John Legend. Chance sets the stage for the celebration.

“Can't stop‚ won't stop bopping like Diddy's song. My next tour, it got eight legs like daddy long. I'm 'bout to have two kids that like daddy's song.”

Do You Remember (featuring Ben Gibbard of Death Cab For Cutie)

A sun-stained look back, featuring the whimsical production of Bon Iver’s Justin Vernon and the cool breeze of Ben Gibbard’s timeless vocals on the hook. A memory of the past, but also cementing the importance of his family in the present.

Getting down to the real in a relationship. Chance bobs along on a smoothed out soul-line, dishing out qualities and facts.

Here Chance and company have some fun with flex track. Forget the watches and whips, here it’s about nudes and some good green.

Taking a classic Michelle Obama quote and making it the center of some IRL life lessons, packed with wisdom we’re solidly subscribing to.

I Got You (Always And Forever) (featuring Ari Lennox, Kierra Sheard, and En Vogue)

On his 90s vibe with some heavenly voices and some of the best to ever do it. A brush off to the haters in the form of a dance song beamed in from 1992.

“Lot of folks share they opinions, same folks so easy offended. One thing I'll always remember… they here today, but we'll be together forever.”

The brothers Bennett share stories about growing up and their unshakable bond, over a cinematic, escalating soundscape.

The Big Day (featuring Francis and the Lights)

The title track and a beautiful blend between Chance and frequent-collaborator Francis and the Lights. The song features one of the oddest moments on the album, when the serenity and power of the tune comes crashing down in an expletive-laden outburst.

“But the only way to survive is to go crazy.”

Chance gets his rock on, like a modern day Steve Miller. Chicago singer Knox Fortune helps him shine in a clapping runaway love song.

“I  got that Superman hidden under my jean suit. Sitting, just waiting for Lois to wanna leave too. Me too.”

Chance takes a backseat to pure fire from Megan Thee Stallion, adding some heat to his victorious verses.

Part of the banger, trap portion of The Big Day. Chance goes into Gucci Mane’s territory, but he flips a flex into another celebration of marriage.

“One day, big catch, hit the bait and switch switch. I was on the line, I became the big fish.”

Shawn Mendes guides this club song into something special, with Chance ricocheting off the velvet voice of Mendes to offer another classic 90s mood.

“Y'all ain't ready for this jelly, it'll break y'all back. Really got a body, can you shake all that?”

Nobody in Hip Hop does this better. Chance lands some inspirational moments, centered on his faith and his drive. Somehow the man behind all the Toy Story songs fits snuggly into the fabric of this epic that shifts from overcoming to observations. One of the brightest spots of The Big Day.

Get A Bag (featuring Calboy)

A beat that’s graduated from the early days of Kanye, here a James Taylor sample sits at the center while Chance trades flows with Chicago rapper Calboy.

Another mid-tempo rattler, featuring some life lessons and some luxury raps.

A lyrical will, where Chance makes clear his wishes about being remembered, and the family that surrounds him.

“Please don't make no movies about my death. Please make my death about my life. If you make a movie about my life, make it right.”

Found A Good One (Single No More) (featuring SWV)

Maybe the most married banger there is.

Town On The Hill

A special tribute to his family, Chance is earnest and spiritual over atmospheric production from Justin Vernon and Francis and the Lights.

“It was yellow in hue, cause it was bursting with light.”

What an upward outro, as Chance’s flow is tighter than ever for some storytelling about the first meeting with wife and beyond. As a bonus, Nicki Minaj turns in her best feature since “Monster.” The perfect nightcap to end The Big Day.