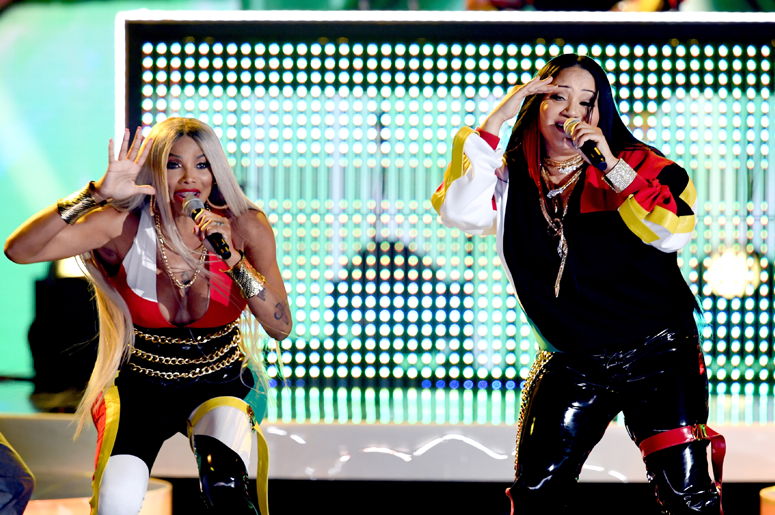 Salt and Pepa's here, and not to correct (well kind of). Yup that’s right, according to Cheryl “Salt” James and Sandra “Pepa” Denton, their biopic Salt-N-Pepa, set to air on Lifetime this Saturday January 23, depicts their lives in honest fashion, with maybe one or two caveats.

When speaking to The Post, Cheryl admitted that when re-creating their story, “It was important for us to be vulnerable and honest while making this movie.” With that said, certain aspects of Salt’s personal relationships with her father and ex-husband, who she said to the Daily Pop, “didn’t sign up for a movie,” were lightly covered, but not explored.

Sandra, on the other had, a self proclaimed “open book,” said for her nothing was off limits. “It was important to share my story, the ups and the downs and the growth, and you know where Hip Hop for women, how it started.”

However when it came to justly depicting her allegedly abusive relationship with ex-husband Anthony “Treach” Criss of Naughty by Nature, Sandra aka Pepa struggled.

“In the movie, I didn’t just want to focus on the negative things between us,” Pep told The Post of her turbulent past with the emcee who denies the abuse. “I wanted to be fair to Treach and show that despite the bad, he was a good guy, too.”

Additionally difficult to share, but not off the table for Cheryl, her battle with bulimia during the height of the GRAMMY Award-winning group’s success. Which contributed to the temporary break-up of Salt-N-Pepa in the early 2000s.

Noting to The Post that it was the most difficult trauma to relive for the film, Salt admitted, “I developed bulimia from the pressure of performing and having to live my life out in the public eye.”

The three-hour movie follows the pair of best friends, played by GG Townson as Salt and Laila Odom as Pepa, from their beginnings of being average teens and part-time Sears telephone solicitors in the mid-’80s, to international music icons in a mere months. Eventually becoming the first female rap act to achieve certified-platinum status.

“When we first recorded 'Push It' in a bathroom in Brooklyn,” Pepa told The Post, “we were so worried the streets were going to hate us for making a pop song.”

After hitting it big with Hip Hop classics such as “The Showstopper,” “My Mic Sound Nice” and “I’ll Take Your Man,” the duo feared to release what would become their biggest-selling track, and we’ll get to see how it how went down. Along with how their unexpected restroom recorded hit would serve as the jump off for a string of sultry, female-empowering chart-toppers including “Shoop,” “Whatta Man” and “Ain’t Nuthin’ But a She Thing.”

“We were never afraid to talk about sex,” Salt said. “Talking about sexuality and being a strong voice for young women just came naturally.”

Salt-N-Pepa’s story is one of power and persistence. True trailblazers in the female rap game, for whom without today we wouldn’t have Nicki Minaj, Cardi B, Megan Thee Stallion and City Girls, which is not a world we're interested in living in.

“People will get to see the struggle we endured as female rappers in a male-dominated industry,” Pep said of the biopic. Adding, “We had to fight for our voices to be heard.”

“With this movie, and in everything we do, we want people to be inspired,” the pair agreed, emphasizing their motto: “No matter what, just keep pushing.”

So as for our final consensus, not having even seen the movie yet, we believe while the Salt-N-Pepa biopic might not tell all, it surely will tell a lot.

WATCH MORE: The Best Movies That Happen to be Biopics