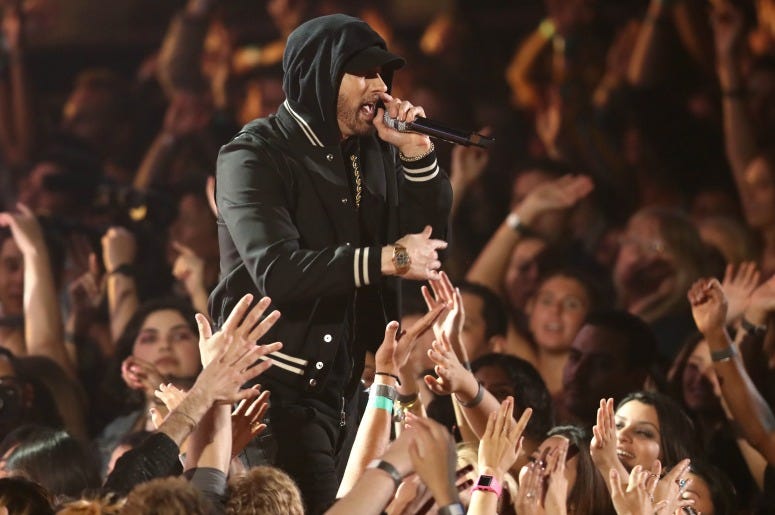 A decade old feud has once again been sparked between Eminem and Nick Cannon. With the Queen of Christmas Mariah Carey at the center, the two are rehashing some old material and fans are less than optimistic about Nick Cannon’s chances.

Old memories of a beef between the two, over lyrics about Carey, was brought back into the light during a podcast appearance from Cannon with T.I. in September. The introduction of the subject back into the culture was enough to put it back on Eminem’s mind, bringing it up in a feature with Fat Joe last week.

“I'm sittin' here reminiscing, think I just got a lightbulb,” he begins.

And with that it was back on, with Cannon answering back in not one, but two diss tracks. Cannon brings up Eminem’s daughter and past drug use, and also alleges that the rapper has undergone plastic surgery. Between songs Eminem responded via Twitter. “U mad bro? Stop lying on my d***. I never even had a chauffeur, you bougie f***,” he shot back. “I demand an apology Nicholas, you've made my gardener so jealous!”

I demand an apology Nicholas, you've made my gardener so jealous!

As fans await a potential lyrical response to these new claims, #RIPNickCannon has been trending, fulling expecting Cannon to be bodied in whatever follows.

Here are a few of our favorites so far.

Bro this is the 2nd time this year the whole world stands together to defend eminem knowing damn well he dosent need any help against nick cannons corny ass diss. I mean even MGKs diss was better than nick's . Thats why Em is the GOAT🐐🐐🐐🐐 #RIPNickCanon

You made 2 diss tracks.
With 19 guys.
Had the worst verse in both of the tracks.
Dissed him for adopting 2 kids and of course being WHITE .
U really think ur winning here? 😩#RIPNickCanon https://t.co/c6OGbn5wd5