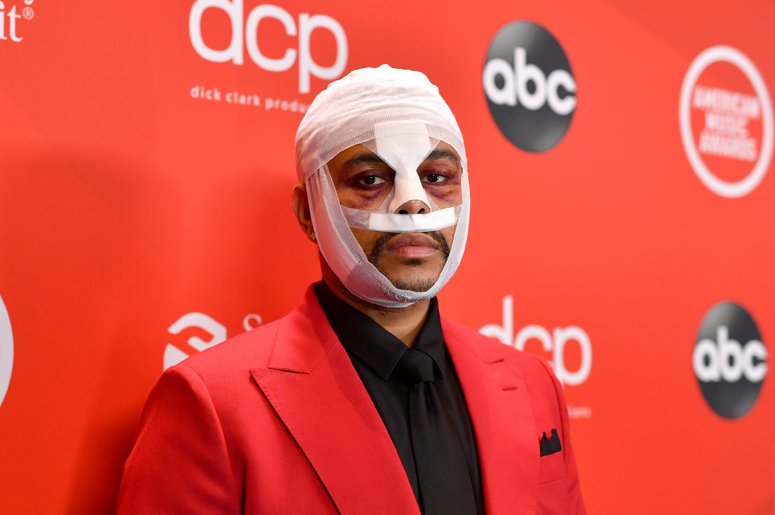 Okay here’s what we know, The Weeknd, real name Abel Tesfaye, has been on a new vibe since debuting the music video for "Blinding Lights.” Following suit, in August, he took to the MTV VMAs red carpet and stage looking all bloody faced, black eyed and swollen. Fast forward to Sunday, the 2020 AMAs, where he accepted three American Music Awards including Favorite Album — Soul/R&B for After Hours and performed "Save Your Tears" and "In Your Eyes" with Kenny G., all while sporting some pretty intense face bandages, along with two black eyes, that are clearly taking an extremely long time to heal (lol jk, we know it’s fake).

Clearly, Abel hasn’t been actually injured, however there is a reason for this particular route of artistic expression. The Weeknd’s aim is to raise awareness about drunk driving, based off the music and persona from his album After Hours and the short films he made for "Blinding Lights" and beyond. Warning people against drunk driving through visibly showing at least one outcome and the types of injuries one can obtain when driving drunk.

As he explained in an interview with Esquire earlier this year, the video for "Blinding Lights" is about "how you want to see someone at night, and you're intoxicated, and you're driving to this person and you're just blinded by streetlights, but nothing could stop you from trying to go see that person, because you're so lonely. I don't want to ever promote drunk driving, but that's what the dark undertone is.”

Knowing that, we have a feeling that as long as The Weeknd promotes and performs songs off his After Hours album, bandages and black eyes will be involved. So, what does that mean his Super Bowl Halftime performance? The answer is, we don’t actually know, but probably… we think.

Find out for sure on February 7, when The Weeknd takes the stage, live from Raymond James Stadium in Tampa, Florida.