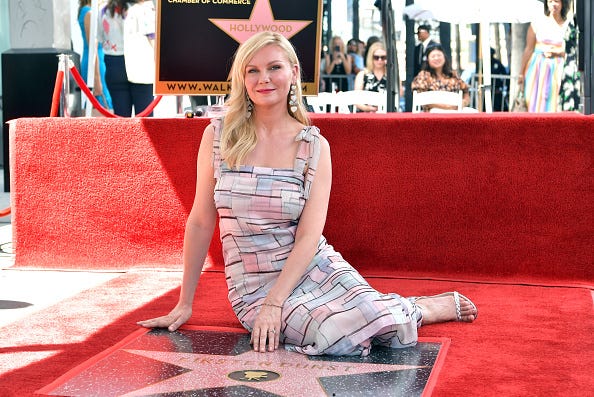 After over 25 years in the business, Kirsten Dunst was finally honored with a star on the Hollywood Walk of Fame this week.

The 37-year-old actress was accompanied by her fiancé and former “Fargo” co-star Jesse Plemons, who introduced her with a glowing speech, according to Us Weekly.

Well, I got it! #lisakudrow

The couple’s adorable 15-month-old son, Ennis, was also on hand to give his mom support.

Dunst rose to fame after her breakout role in the 1994 horror film “Interview with a Vampire” alongside Brad Pitt and Tom Cruise. She has gone on to star in a slew of films including “Bring It On,” “Spider-Man,” “Mona Lisa Smile” and “Marie Antoinette.”

But despite having her name permanently engraved on the renowned boulevard and her stellar acting credits, the actress recently disclosed she doesn’t feel embraced by the industry, according to CNN.

Are you ready for a new episode of #OnBecomingAGod in Central Florida? Let us feel your YES!

"I've never been nominated for anything. Maybe like, twice for a Golden Globe when I was little and one for 'Fargo,'" Dunst told SiriusXM’s “In Depth with Larry Flick.” "I always feel like nobody— I don't know, maybe they just think I'm the girl from 'Bring It On.'"

Dunst went on to point out how some of her past projects like “Marie Antoinette” and “Drop Dead Gorgeous” were initially panned, but with time have become embraced by critics and viewers alike.

"I feel a lot of things I do people like later," she added. "I've never been recognized in my industry."

In addition to the Golden Globe nominations she mentioned, Dunst was also nominated for an Emmy for her work in “Fargo” and received a SAG Award for “Hidden Figures.”

Dunst’s new Showtime series “On Becoming a God in Central Florida” premiered this week, so hopefully there will be more accolades coming her way in the very near future.