“You need to listen to the album, because I am the last person that you want to go on a date with” Lewis Capaldi warns in a new exclusive clip from RADIO.COM. “Obviously this relationship did not work out and you need to get your priorities straight.”

The lovelorn voice behind hits like “Someone You Loved” has put a big bold underline on all of his heartbreak, transforming it into the epic and emotional debut album Divinely Uninspired to a Hellish Extent. Tears have turned to triumph and success for sure, but Capaldi is still out there looking for someone.

The Scottish singer has detailed his online dating adventures, and their unfortunate side effects for us in the video above.

“I have Tinder Gold,” Capaldi explains. “Which is basically what very lonely people have.”

The in-app subscription service is supposed to increase your chances at swiping into romance, but the singer has had no such luck. “My Tinder profile is a paid Tinder profile, where I can see who likes me before they can see. So when I’m swiping I don’t have to swipe the usual rigmarole, I can just see who likes me.”

It sounds like an extra edge for the star, who has many swooning with his anthems of anguish. It’s tough out there, even for a number one artist, so when you have a few dollars from chart-topping tear-jerkers, you might as well pay for the competitive advantage. It’s a great plan, but sometimes the truth of too much information hurts the worst.

“I thought, the likes are gonna flood in, and I’m gonna see everything,” Capaldi says hopefully. “But the likes were not as plentiful as I had first anticipated, and it just served to lower my self-esteem that much further.”

It’s tough to be about app life. Capaldi has spoken before on his Tinder troubles, but the lack of likes on the dating platform is not the reality. The singer has caught the eye of millions with his best-selling debut, and has even found some unlikely attention from Oasis star Noel Gallagher.

After Gallagher trolled Capaldi in an interview, comparing him to Chewbacca from Star Wars, Capaldi continued the feud with a wink – wearing a Chewbacca mask and covering the Oasis hit “Don’t Look Back In Anger” with a special twist at this weekend’s TRNSMT Festival. The 22-year-old referred to the 52-year-old Gallagher as “my dear, dear father” before performing his rendition, “Don’t Chewbac In Anger.” 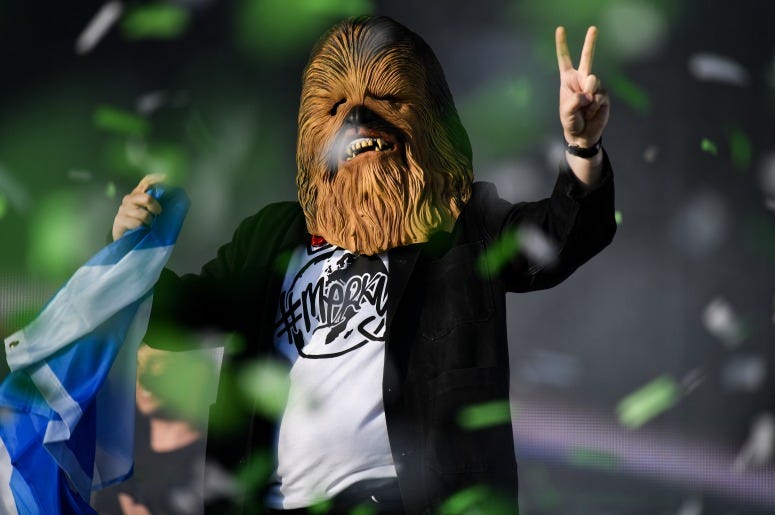 Capaldi is back in the US for a tour this September. You can find the full list of dates here.

sports
Albert Pujols is 1 HR Away from Willie Mays But Does Anyone Care?
news
Most People Agree Their Skin Is Healthier From Spending More Time at Home
sports
Von Miller, Inspired by 'The Last Dance,' Doubles Down on Commitment to Teammates
news
Second Grader Tests Positive for COVID-19 After First Day Back in School
news
Couple Raises $20,000 to Buy Face Masks for Their Community
sports
Browns Tight End Austin Hooper Takes Dig at Former Cowboys Star Jason Witten