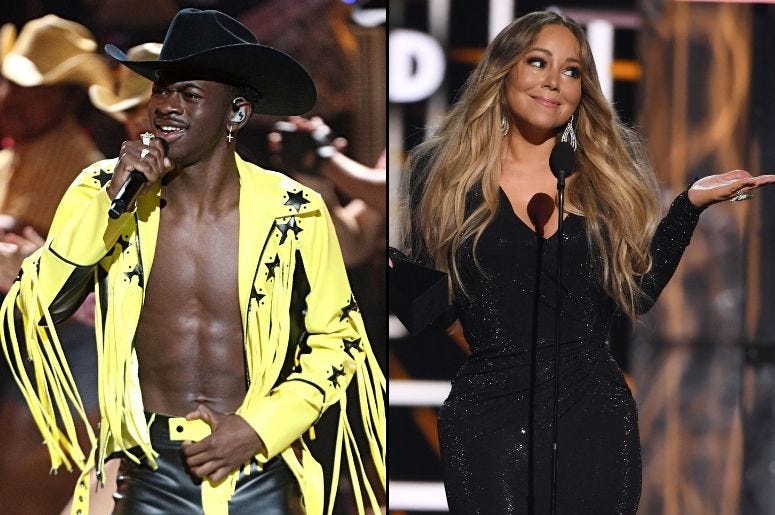 For a 15th week in a row, “Old Town Road” is the biggest song in the country. The Lil Nas X debut single is now just one step away from joining two other songs as the longest-running number ones in Billboard Hot 100 history.

The 16 week mark is the top of the mountain when it comes to chart achievement, accomplished only twice in six decades. “One Sweet Day” from Mariah Carey and Boyz II Men set the standard in 1996, with a run unmatched until the global phenomenon of “Despacito” took hold over 20 years later. The Luis Fonsi and Daddy Yankee tune featuring Justin Bieber broke down barriers and rocketed to the top to match their run in 2017.

Now, the genre-bending and generation-spanning “Old Town Road” is just a step away from ascending into the record books. From viral video material to Country chart confusion, the song has melted away every barrier to become the ubiquitous anthem of 2019.

It’s worth noting that “Old Town Road” also became the longest-running number one debut single this week, passing “Macarena” by Los Del Rio. During his reign in the top spot, Lil Nas X has withstood big pushes from established stars like Katy Perry, Ed Sheeran, and Taylor Swift, but the moment has been all his.

With the song’s success, Lil Nas X still can’t quit remixing the remix. Billy Ray Cyrus first jumped on the song in April to help secure its dominance, and just last week the star unwrapped another edition featuring Country Trap pioneer Young Thug and yodeling youngster Mason Ramsey. Could there be another up his sleeve before it’s all over?

With company looming in the record books, Mariah Carey has offered her services for another remix, tweeting out her own suggestion of “One Sweet Town Road” over the weekend. We never even knew we wanted that, but now it’s all we can think about.

We’ll have to wait a week to see if a sweet 16th week is in the future for “Old Town Road”. Can Lil Nas X fend off a new challenge from Post Malone, or Billie Eilish bringing Bieber on-board for a “bad guy” remix? Can the addition of Ramsey and Young Thug push X over the top? We’ll find out on Monday, but either way it’s been a long, strange trip down “Old Town Road”.