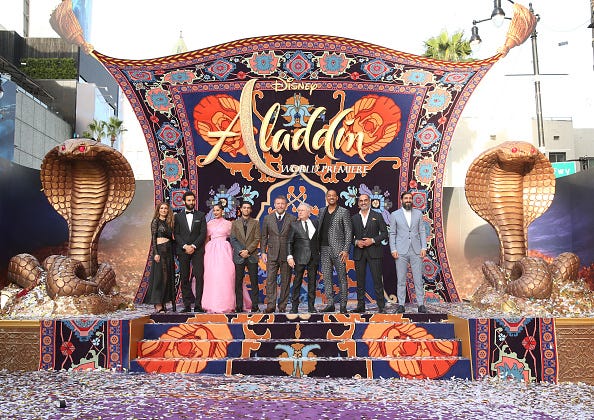 We’re heading back to Agrabah for another magic carpet ride!

Variety reports that Disney is in the process of developing a sequel to “Aladdin.”

Sources say the creative team behind the original film, Dan Lin and Jonathan Eirich, will be back as producers, while writers John Gatins and Andrea Berloff have signed on to pen the script.

The Hollywood Reporter claims director Guy Ritchie is set to return to helm the sequel. THR added that producers want the original cast including Will Smith (Genie), Mena Massoud (Aladdin), and Naomi Scott (Princess Jasmine) to reprise their roles.

While the direction of the film is being kept under wraps, it is said that it will not draw inspiration from the animated film’s two straight-to-video sequels.

In fact, reports say the studio spent six months discussing the plot, which may draw inspiration from a collection of Middle Eastern folk tales.

Disney’s decision to pursue a sequel is a no-brainer and comes on the heels of the 2019 film’s smashing success at the box office.

Based on the 1992 animated film about a street urchin who gets help from a magical genie to win the heart of Princess Jasmine, “Aladdin” became the fourth live-action adaptation to cross the billion-dollar mark globally next to “The Lion King,” Beauty and the Beast,” and “Alice in Wonderland.”

The sequel will reportedly attempt to capitalize on the box-office success and will be released in theaters before likely finding its way onto the Disney+ streaming platform like the original.