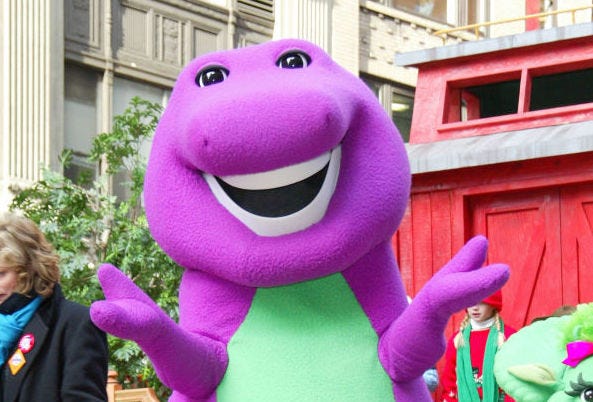 Barneys New York may be on the verge of closing all its stores, but Barney the Dinosaur is ready for his big screen close-up.

Mattel Films has announced they are producing a live-action movie based on the beloved big purple dinosaur, according to The Hollywood Reporter.

Barney is headed to the big screen. Mattel Films is partnering with #GetOut star Daniel Kaluuya to produce a live-action movie based on the ubiquitous purple dinosaur https://t.co/lf9IAued7V

“Barney” is being spearheaded by the production company of “Get Out” star Daniel Kaluuya, who holds a special place for the musical Tyrannosaurus rex.

“Barney was a ubiquitous figure in many of our childhoods, then he disappeared into the shadows, left misunderstood,” the Oscar nominated actor said. “We're excited to explore this compelling modern-day hero and see if his message of 'I love you, you love me' can stand the test of time."

And while there are few other details about the film adaptation, it appears this won’t be just a straight-up reboot of the popular children’s TV series.

“Working with Daniel Kaluuya will enable us to take a completely new approach to Barney that will surprise audiences and subvert expectations. “ Mattlel Film added. “The project will speak to the nostalgia of the brand in a way that will resonate with adults, while entertaining today’s kids.”

Premiering in 1992 as “Barney and Friends” on PBS, the educational show aired for 17 years before signing off for good in 2009.

Much to the delight of kids - and the annoyance of parents - each episode ended with Barney singing the show’s “I Love You” theme song.

For the sake of adults everywhere, here’s hoping Kaluuya and crew come up with a modern take on the song too!