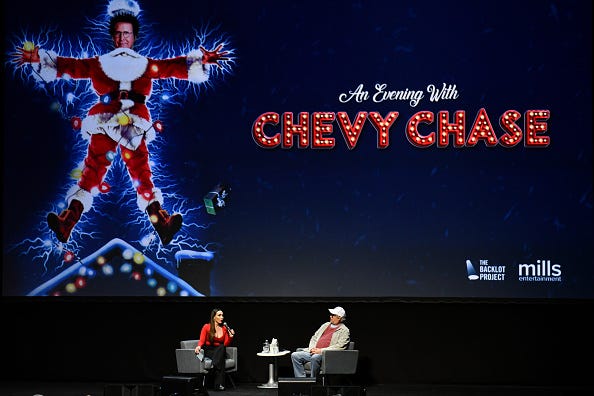 We’re gonna have the hap-hap-happiest Christmas because “National Lampoon’s a Christmas Vacation” is coming back to the big screen.

It’s been 30-years since the beloved holiday film first debuted in theaters, but since then, it’s earned the title as a yearly must-watch Christmas classic.

The very quotable 1989 film starring Chevy Chase will be returning to select AMC theaters from Friday, Dec 6 through Thursday, Dec 12.

Since tickets will only set you back $5, it really feels like a blast from the past.

AMC is encouraging moviegoers to purchase tickets in advance because “the last thing you’ll want to hear is ‘Merry Christmas. Theatre’s full.'”

Check out the complete list of participating theaters here and purchase tickets for your big-screen reunion with the Griswold’s.

Due to its rave reviews, it became the first sequel to have a sequel spawning the made-for-TV follow-up titled, “National Lampoon’s Christmas Vacation 2: Cousin Eddie’s Island Adventure."

Here’s the film's official synopsis: “As the holidays approach, Clark Griswold wants to have a perfect family Christmas, so he pesters his wife, Ellen, and children, as he tries to make sure everything is in line, including the tree and house decorations. However, things go awry quickly. His hick cousin, Eddie, and his family show up unplanned and start living in their camper on the Griswold property. Even worse, Clark's employers renege on the holiday bonus he needs.”