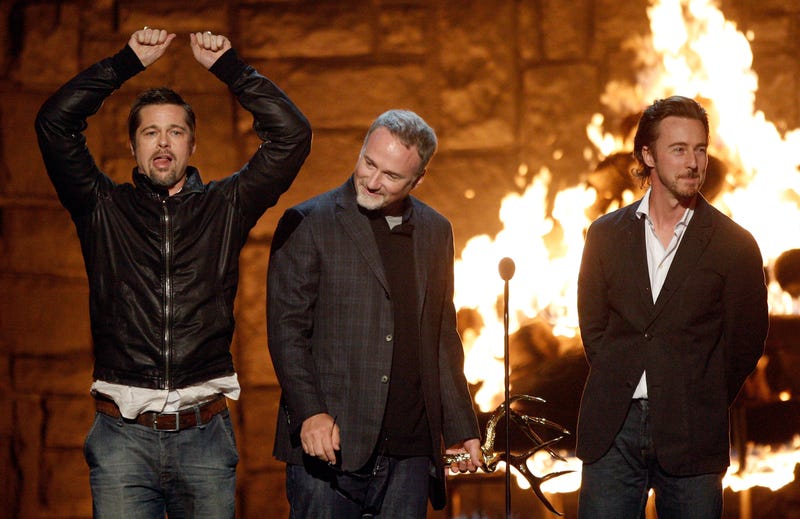 I am Jack’s spoiler alert: proceed with caution if you still haven’t seen this one.

If you have, let’s set some ground rules…

Okay, we’ll spare you that line. But even if you’ve seen David Fincher’s mental, stylized, anti-consumerist adaptation of the Chuck Palahniuk novel a hundred times, we bet there are still a bunch of hidden details you still haven't caught.

Many of these anticipate the twist ending: that Tyler Durden (Brad Pitt) is not real, but a figment of the narrator (Edward Norton)'s imagination. While others are just plain old meta-games.

“Fight Club” was released on Oct. 15, 1999. To celebrate the 20th anniversary of the movie that featured one of Edward Norton’s most breakthrough roles and one of Brad Pitt’s most bad-a** ones, we’ve put together these artful secret moments that were weaved into the pattern of this intricate movie.

Tyler Durden (Pitt) appears in "Fight Club" six times before he and Norton's character meet officially meet, flashing on the screen in several moments like here, when the narrator is mindlessly making copies at work.

In one of many masochistic scenes in the film, Tyler gets his a** kicked by Lou, the owner of the bar in whose basement Fight Club meets. One of many clues that Tyler is the narrator's alter ego is when Lou throws his first punch in Tyler's stomach, and Norton, who stands by, subtly winces down.

In Fight Club, during a scene when Norton and Marla are walking down the street, they pass a movie theater showing the Brad Pitt movie "Seven Years In Tibet". pic.twitter.com/jJ8S74uRov

In the scene when Marla (Helena Bonham Carter) is sent out of town by Norton's character, there is a marquee in the background with "Seven Years in Tibet," Pitt's 1997 drama about an Austrian mountaineer whose attempt to scale a Himalayan peak is interrupted by World War II. Fincher told Entertainment Weekly the scene was supposed to also contain marquees for Carter's "Wings of the Dove" and Norton's "People vs. Larry Flynt," but the bus blocked these other ones.

Moments after the narrator's Ikea'd-out condo explodes, he calls Tyler's number from a payphone. After no one answers, the phone rings and the narrator picks up to find Tyler on the other line. What's the rub? If you observe the close-up of the the payphone carefully, you'll see "No incoming calls."

Only viewers who watched the movie on Blu-Ray caught this one. When you fire up the tenth anniversary Blu-Ray version of the film, you see the menu for the Drew Barrymore romcom "Never Been Kissed." The move was David Fincher's idea, an impressive troll from far beyond the director's chair.

There's a moment in the film when Tyler gives an impassioned speech about modern life, including the line, "We’ve all been raised on television to believe that one day we’d all be millionaires and rock stars. But we won’t." When he says the words "rock stars," he stares directly at Angel Face, played by Jared Leto, who, in addition to acting, actually is a rock star, member of the band Thirty Seconds to Mars.