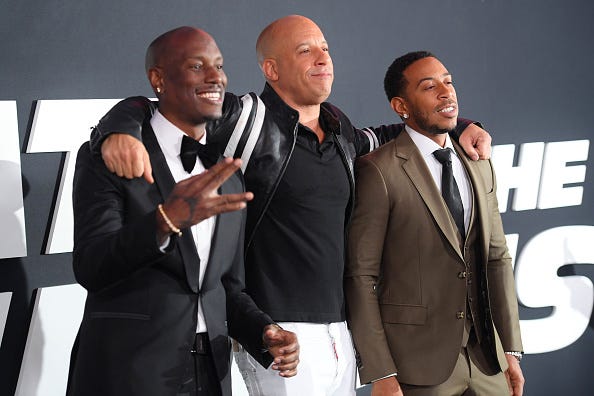 2020 is shaping up to be a very exciting movie year.

There are plenty of buzzworthy Hollywood releases on tap for the new year including a handful of sequels such as “A Quiet Place 2,” “Ghostbusters: Afterlife,” and “Wonder Woman 1984.”

It’s also the year of new installments for fan-favorite franchises “Fast and the Furious” and “James Bond."

And if that’s not enough to get you pumped, Disney is gearing up for the live-action film "Mulan," based on the beloved animated film.

Check out the below list of upcoming films audiences cannot wait to see in theaters next year!

Birds of Prey: And the Fantabulous Emancipation of One Harley Quinn – Feb 7

“Birds of Prey” has topped IMDb’s list of most-anticipated films of 2020, according to The Wrap. Margot Robbie reprises her role as the deliciously unhinged Harley Quinn who “joins superheroes Black Canary, Huntress and Renee Montoya to save a young girl from an evil crime lord, Black Mask in Gotham City.”

The release of “Sonic the Hedgehog” was pushed back to 2020 after criticism over the design of the titular character forced Paramount to recreate a new and improved version. In the film, “Sonic tries to navigate the complexities of life on Earth and prevent the evil Dr. Robotnik with his newfound best friend -- a human named Tom Wachowski.”

Picking up almost immediately after the deadly events of the first film, Emily Blunt returns as the matriarch of the Abbott family (Millicent Simmonds and Noah Jupe also reprise their roles) as they leave behind their home and once again fight for survival “against otherworldly creatures that hunt by sound.”

The 1998 Disney classic comes to life in this live-action adaptation that finds the fearless warrior, Mulan (Ming-Na Wen), posing as a man to save her ailing father from joining the Imperial Army and fighting northern invaders.

Daniel Craig takes his final bow as 007 in the latest installment of the James Bond franchise. The spy is pulled back into active duty to rescue a “kidnapped scientist,” which puts him “hot on the trail of a mysterious villain" played by Rami Malek.

The Marvel film dives into the past of Natasha Romanoff aka Black Widow (Scarlett Johansson), an elite spy, one of S.H.I.E.L.D.'s most deadly assassins and a frequent member of the Avengers, who is finally getting her much-deserved origin story.

A sequel to 2017's “The Fate of the Furious,” “Fast & Furious 9” pits Dom and his family against some threats that may be connected to former enemy and cyberterrorist Cipher (a role reprised by Charlize Theron). The official trailer is set to drop Super Bowl weekend.

The sequel to the 2017 film transports us to the 80s, the era of big hair and the Cold War, which is where Wonder Woman faces off against the Cheetah, “a villainess who possesses superhuman strength and agility.”

The sequel to 1984's "Ghostbusters" and 1989's "Ghostbusters 2" introduces a new generation of Ghostbusters when a family evicted from their home arrives in a strange small town to stay in their late grandfather’s home. They soon learn they have a connection to original Ghostbuster, Ego Spengler, played by the late Harold Ramis.

The period spy film serves as a prequel to “Kingsman” dates back a century as one man attempts to stop “history's worst tyrants and criminal masterminds,” led by Rasputin, as they plot to band together and kill millions of people thus wiping out humanity.

Before Lin Manuel Miranda brought us “Hamilton," it was all about "In the Heights,” a Tony Award-winning Broadway play that’s hitting the big screen as a film adaptation helmed by Crazy Rich Asians” director, Jon M. Chu. The film takes place in a mostly Hispanic neighborhood in New York City called Washington Heights where a bodega owner is conflicted about his dreams about retiring in the Dominican Republic.