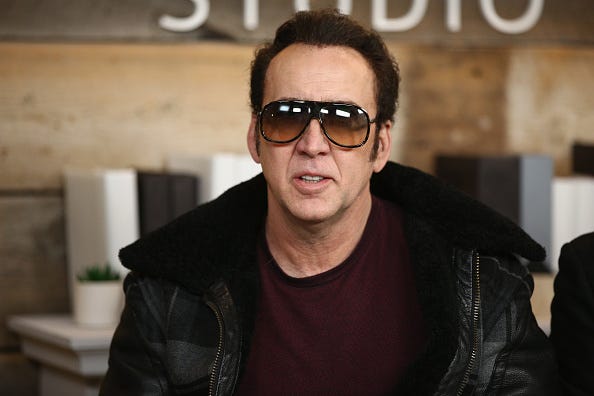 From Benjamin Franklin Gates to Johnny Blaze to H. I. McDunnough, Nicolas Cage has embodied some peculiar characters throughout his career.

But he's about to embark on his biggest role to date.

Nicolas Cage is said to be taking on one of the most iconic characters in Hollywood: Nicolas Cage.

According to The Hollywood Reporter, Cage is in talks for a movie titled “The Unbearable Weight of Massive Talent,” which could double as a title of his future memoir.

Lionsgate beat out several studios for the project and is currently in final negotiations.

THR describes the film like this: “The character is desperate to get a role in a new Tarantino movie while also dealing with a strained relationship with his teenage daughter. He also occasionally talks to an egotistical 1990s version of himself who rides him for making too many crappy movies and for not being a star anymore.”

Things take an even weirder turn as film Cage attends a birthday party of a Mexican billionaire where he is “informed by the CIA that the billionaire is actually a drug cartel kingpin who has kidnapped the daughter of a Mexican presidential nominee, and is recruited by the U.S. government to get intelligence.”

And that’s not all!

“The situation spirals even more dramatically when the Mexican brings over Cage’s daughter and his ex-wife for a reconciliation, and when their lives are on the line, Cage takes on the role of a lifetime,” the description adds.

In other words, it’s a metadrama mixed with an international crime thriller that also includes nods to Cage’s previous works such as “Face Off” and “Gone in 60 Seconds.”

Only a legend of Cage's caliber could handle such a complex role.

It almost feels like Cage has been working towards this role his whole life.

Twitter users have been expressing their excitement over the casting.

Here are some of the best reactions:

Nicolas Cage is going to star as himself in a movie and I honestly think this could cause the implosion of the universe. (via @THR) pic.twitter.com/ogDShlndFT

This is the most Nicholas Cage thing I have ever seen. He's out Nic Caged himself. https://t.co/RyS6PzZktr

Cage isn’t just going to star as himself in a movie about himself, though, he’s also going to co-produce it.

The script hails from Tom Gormican and Kevin Etten, and was reportedly sent to Cage with a love letter explaining it's purpose was to honor his career and not make fun of it.