Since rising to stardom in 2008, Katy Perry has worn her fair share of fun and whimsical outfits.

A handful of these colorful and appetizing outfits have been inspired by tasty treats that we all love to eat. Who wouldn’t want to dress up as a feast that’s “fresh out the oven?”

Oftentimes, these food-inspired outfits make bold statements. Case-and-point: when Perry buried the hatchet with frenemy Taylor Swift by appearing in her music video dressed as the “burger” to Swift’s “fries.”

Perry’s outfits have ranged from small snacks to Five-star Michelin courses: she’s proven to have a sweet tooth by dressing as various pastries (and tasting like cherry chapstick), she’s flaunted her love for Flamin’ Hot Cheetos, and she’s never shied away from incorporating her favorite fruits into an ensemble.

We hope you’ve got an appetite because ahead of Katy Perry’s headlining performance at B96's Pepsi Jingle Bash in Chicago on Saturday, we are looking back at all the times Perry dressed as a literal snack.

You can still buy tickets to the show right here.

Made a meal outta it 🍔

Cheeseburger at the Met Gala

After walking the Met Gala’s pink carpet as an illuminating chandelier, Perry changed into her “to go” outfit that was equally as iconic. Perry donned a massive hamburger outfit complete with two seasoned buns, a burger patty, lettuce, tomato, cheese, and pickles. And when she removed that outfit, she still donned a lettuce bodysuit.

Perry embodied everyone’s favorite guilty-pleasure, a Flamin’ Hot Cheeto (yes, singular), for Halloween in 2014. More impressive than her crunchy, red chip outfit was her fiery handbag made from an actual bag of Flamin’ hots. Do you think she had some inside to munch on?

One of the reasons we love Perry is because of her dedication to food, specifically pizza. Perry flaunted her love of the cheesy and savory dish in a onesie form during a visit to the Philadelphia Museum of Art in 2014.

Burger and Fries with Swift

As mentioned previously, Perry made a guest-appearance on Swift’s “You Need to Calm Down” music video that put an end to their longtime beef. Perry donned her infamous burger costume and embraced Swift who dressed as an order of fries to make one ‘happy meal.’ Proof that there’s nothing a good meal can’t fix.

As fellow pop star Rihanna once said, “cake, cake, cake.” Perry has never sugar-coated her love for confections; she's dressed as a desert on multiple occasions. While her most famous sweets-inspired look comes from the “California Girls” music video and features a cupcake bra, our personal favorite comes from when she dressed up as cake for the “Teenage Dream” digital booklet.

Why be one specific fruit when you could be a whole fruit salad? Perry’s fruity performance of “I Kissed a Girl” at the 2009 Grammy Awards in Los Angeles featured a bedazzled bodysuit covered with bananas, watermelon chunks, and cherries. 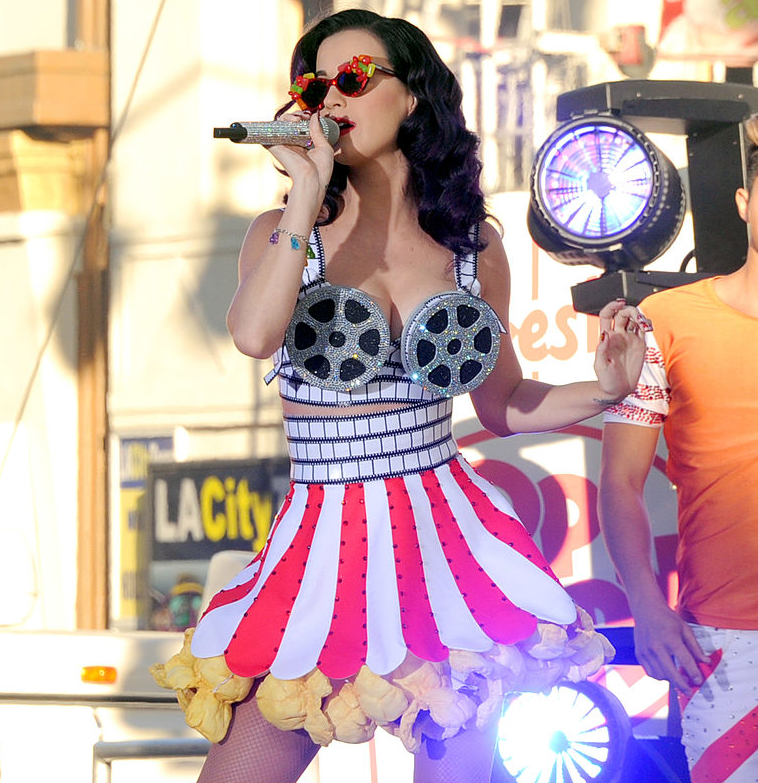 Lookin’ like a snack! Buttery, salty, goodness was Perry’s outfit inspiration for a live performance for "Katy Perry: Part Of Me" at Grauman's Chinese Theatre on June 26, 2012. When she tore off the popcorn skirt, she revealed booty shorts constructed from an assortment of concession-stand candy. 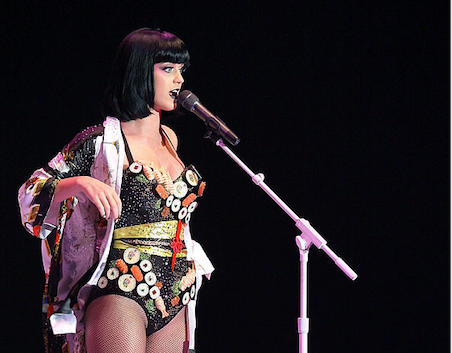 They always say ‘you are what you eat,’ and during a performance at the MTV Video Music Awards, Perry was authentic sushi. As she pulled back her kimono on-stage, the star revealed a leotard embroidered with glittering California rolls.

We’re including this a bonus slide simply because a peppermint martini isn’t technically considered ‘food,’ but we love the outfit nonetheless. Perry has embraced a few variations of the peppermint outfit throughout her career, but this is the first time she’s ever been dunked in a martini glass while donning a candy-cane striped leotard. Festive and delicious!

Which outfit do you think she’ll wear at the Allstate Arena on Saturday, December 7? You can find more details about Katy's appearance at B96's Pepsi Jingle Bash here.