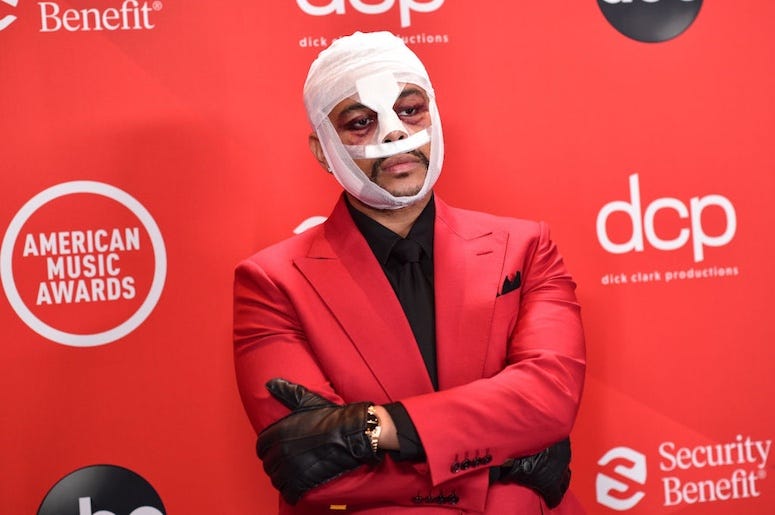 After taking home numerous awards at the VMAs and AMAs along with several nominations at the Billboard Music Awards, you’d think The Weeknd would be a shoe-in for the GRAMMYs, right? Apparently not.

The Weeknd wasn’t nominated for any awards at the 2021 GRAMMYs as his snub has become one of the biggest stories.

“The Grammys remain corrupt. You owe me, my fans and the industry transparency,” he tweeted just a few hours after the GRAMMY nominees were revealed.

In a lengthy statement, Harvey Mason Jr., Chair and Interim President/CEO of the Recording Academy addressed The Weeknd’s lack of nominations. “We understand that The Weeknd is disappointed at not being nominated,” he said.

“I was surprised and can empathize with what he’s feeling. His music this year was excellent, and his contributions to the music community and broader world are worthy of everyone’s admiration. We were thrilled when we found out he would be performing at the upcoming Super Bowl and we would have loved to have him also perform on the GRAMMY stage the weekend before.”

“Unfortunately, every year, there are fewer nominations than the number of deserving artists.  But as the only peer-voted music award, we will continue to recognize and celebrate excellence in music while shining a light on the many amazing artists that make up our global community,” Mason Jr. added.

In an interview with Variety, Mason Jr. expanded upon his previous statement. “I don’t think [the Weeknd’s omission calls the nominations] process into question, honestly,” he said.

“The process is there so we can continue to monitor excellence. I was in the ‘core room’ this year [which decides the main categories] and I observed, and the people in it are music professionals, at the top of their craft in songwriting and producing and there are a lot of artists.”

In another interview with Variety, Mason Jr. revealed he was in the room when the nominees of the “Big Four” (Record of the Year, Album of the Year, Song of the Year, and Best New Artist) were decided and elaborated on the nominating process and everything that goes into it. “We listen to all the music — even an album, you’re listening to almost the whole album, it takes I don’t know how many hours. It’s a long, arduous process and people take pride in it,” he said.

“The people in that room care: there’s no agendas in there, there’s no ‘let’s snub this person’ or that person. It’s about. ‘Let’s try and find excellence.’”

“Also, you have to remember that committee can’t vote on something that’s not there. They get a list of the 20 top vote-getters from the general voting field, and at that point they listen and talk about who to push forward as the final eight. So it’s really a two-step process,” he added.