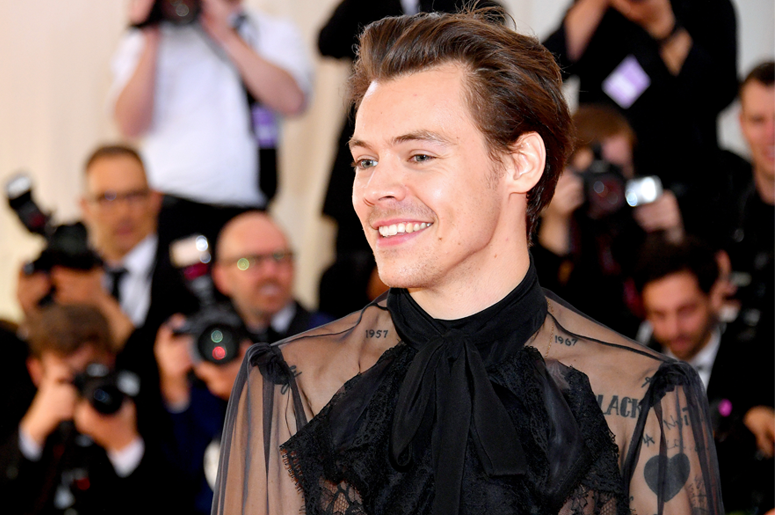 Besides being known for his angelic voice and charming good looks, Harry Styles has built a name for himself as a fashion icon. Not afraid to take risks, his predilection for breaking fashion barriers is only furthermore brought to light as Vogue’s first cover-boy, or should we say man.

When it comes to his personal style, Styles has no firm set of rules, or rather he makes his own, just as it reads on the magazine’s cover, “Harry Styles makes his own rules.” Not frightened to experiment with colors and patterns, often rocking and assortment of rings on his messily painted finger nails and mixing menswear with lacy detailed designs traditionally targeted to women, are just a few of the things that come to mind.

All of which have earned Styles a coveted solo spot on the treasured fashion magazine’s cover - making him the first man to do so, as it has been reserved for women, featuring men occasionally alongside them. Well look at that, another fashion norm, Harry has effortlessly knocked down.

In the December issue spread, Harry is right at home in more ways than one. Having grown up in a village in the North of England, the backdrop of Notting Hill plays as a peaceful and familiar setting to his extravagant wardrobe of assorted colors and fabrics we've grown to associate with the star.

Dripping in Gucci from head to toe, for his cover look, Harry pairs a lacy powder blue and black trimmed dress with a satin tuxedo jacket, that literally left us gasping (like in a good way). And as you turn the pages, the photos and interview inside, continue to bear the same statement.

“Clothes are there to have fun with and experiment with and play with,” Styles told Vogue. “What’s really exciting is that all of these lines are just kind of crumbling away. When you take away ‘There’s clothes for men and there’s clothes for women,’ once you remove any barriers, obviously you open up the arena in which you can play.”

Harry’s playful nature and aesthetic instincts for fashion shine throughout the Vogue shoot. As he’s seen in a ﻿Wales Bonner knitted sweater vest and kilted skirt for one of his looks. While in another, he takes the opportunity to team up a zoot suit with a hoop skirt and crinoline in an striking ensemble from Harris Reed.

“I’ll go in shops sometimes, and I just find myself looking at the women’s clothes thinking they’re amazing,” he continued. “It’s like anything, anytime you’re putting barriers up in your own life, you’re just limiting yourself. There’s so much joy to be had in playing with clothes.”

Styles continued, “I’ve never really thought too much about what it means, it just becomes this extended part of creating something.”

For a glimpse at more of Harry’s looks for Vogue check out his acoustic performance clip of “Cherry,” shot for the magazine below. And of course within the pages of the December issue when it hits newsstands on November 24.