Jennifer Lopez is showing off her bling ahead of her Super Bowl halftime show performance!

If her red, white, and blue bedazzled tumbler is any indication, Lopez’s upcoming performance at the football game is going to dazzle, sparkle, and shine.

The pop star posted a picture showing off her rhinestone accessory encrusted with the colors of Pepsi, the sponsor of the halftime show, and the date of the big game, “02.02.20.”

“Happy Sunday! ✌🏽 week countdown until the Super Bowl = time for a new bling cup,” she captioned the selfie on Instagram ahead of her appearance at the SAG Awards over the weekend.

JLo is a huge fan of “bling cups” as evidenced by her Instagram account. She has a custom-made Starbucks one, a black-and-white one with "JLO" on it, and she even made one for her fiancee A-Rod, so it’s not entirely surprising that she had a custom-made one ahead of the biggest performance in her career.

Hopefully, the reusable tumbler is keeping her hydrated as she’s been hard at work rehearsing for the big show.

Back in December, A-Rod shared a video of her rehearsing with her young dancers and teased that “all they wanted was a little ice cream.”

Earlier this month, she posted a picture of herself taking a break from rehearsals to snuggle up to her twins, Max and Emme.

The singer and actress will share the stage with Colombian singer Shakira at the Hard Rock Stadium in Miami Gardens, Florida. 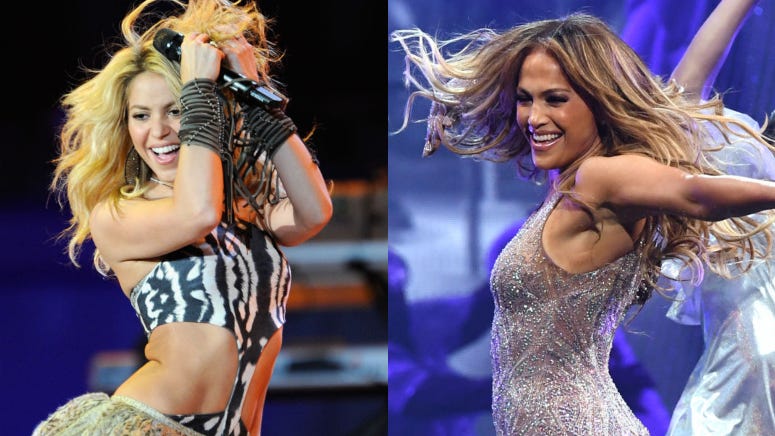 “I am so excited that they picked two strong women, both Latinas,” Lopez said shortly after she was announced as the headliner in September. “I think they really wanted to make a statement with that and I’m really happy to be part of that new movement of inclusivity and diversity and embracing women.”

The Kansas City Chiefs will face-off against the San Francisco 49ers on February 2nd.