Taylor Swift stopped by The Tonight Show with Jimmy Fallon on Thursday, ready to promote her appearance this weekend on Saturday Night Live. It started nice enough, as the two talked about her new album, Lover, and previewed the performance, but Swift was not ready for the surgery sneak attack Fallon was about to spring.

“Didn’t you just get lasik surgery?” he asked, as Taylor looked on with confusion. “I did. How do you know that?” she said with shock.

Fallon follows by asking if they give pain killers after the procedure.
“They definitely give you some pretty hardcore pills after you have a laser in your eye,” she explained, still working on figuring Fallon out. “What is going on?”

As it turns out, Fallon was able to secure video of Swift’s “loopy” moments after her surgery, still battling through the fog of pain medicine and showing some strong emotions towards a bunch of bananas. With her eyes covered and protected, Taylor tries to deal with the drama of having a banana without a stem.

“That wasn’t the one I wanted,” she whines, as the simple act of picking a piece of fruit becomes endlessly difficult under the influence. Fighting tears, because she can’t cry, Taylor’s mom helps her through. “What do we do with this now?” Swift whimpers about a banana with a broken stem. “It doesn’t have a head.” 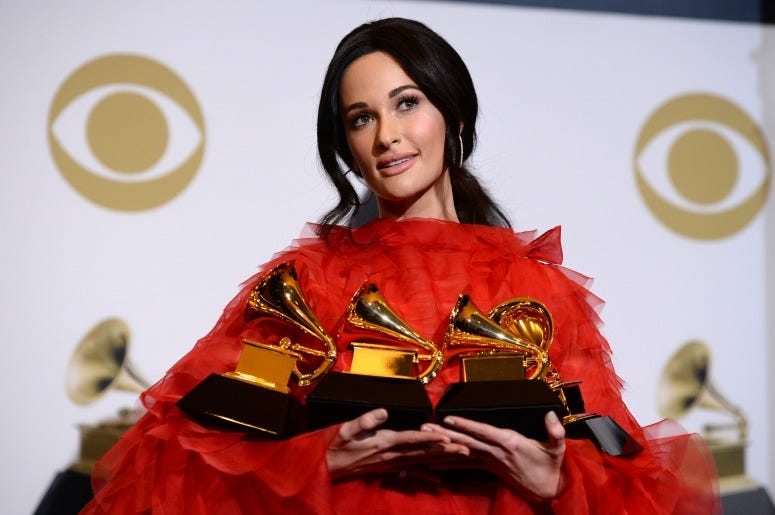 Who Will Score a GRAMMY Nomination for 'Album Of The Year'?

A half-awake Swift makes her way to the bed, banana in hand, as her mother warns her again. “Don’t fall asleep eating a banana.”

“I’m not asleep, my mind is alive,” Swift shoots back.

Swift survived the surgery, and can see much better now. No bananas were harmed in the process. You can watch Taylor Swift this weekend when she is the musical guest on Saturday Night Live.