John Legend had so much fun making a holiday album in 2018 that he followed it up this year with a deluxe edition of A Legendary Christmas. He stopped by RADIO.COM station 94.7 The Wave to talk about it, as well as play a game of “true or false.”

Deborah Howell asked Legend about the unlikely place where he first met Michael Jackson, his three dogs whose names all begin with the letter “p” and wife Chrissy Teigen’s Twitter bio. Hint: it has something to do with Legend being named People’s sexiest man alive. 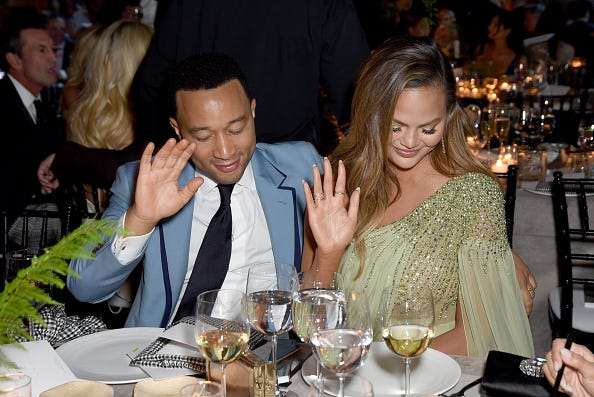 But the conversation couldn’t help leading back to some Halloween fun the Teigen-Legend family had. They all decided to dress up in onesies and go to “Horror Nights” at Universal Studios Hollywood, with John wearing one with his own face on it. There was wine, and then there was singing at the urging of Chrissy.

“She thought it would be funny that I would be singing to an empty crowd, but of course I got up there and started singing a remixed version of “All of Me”… and I kept pointing to my face on the onesie,” Legend recalled. “People started gathering around, so by the time I was done it was kind of a big crowd, but it was very funny.”

We also learned that John was homeschooled by his mom and that he requests half a rotisserie chicken before every show – not that he eats the whole thing. You can check out the full interview with John Legend here.

The deluxe edition of A Legendary Christmas features four additional songs, including the much talked about new #MeToo-friendly version of “Baby it’s Cold Outside” with Kelly Clarkson.