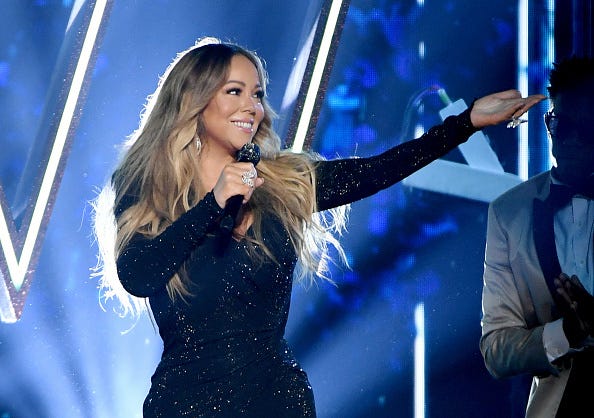 Mariah Carey is ready to set the record straight in her new memoir.

The pop diva is currently in the midst of writing her autobiography, which will detail the ups and downs of her personal and professional life, according to Variety.

One topic that she isn’t shying away from is her reported breakdown for which she was hospitalized for “extreme exhaustion” in 2001.

Mariah Carey says that she had "a whole supposed breakdown, alleged" and shares that her therapist told her: “You didn’t have a breakdown; you had a diva fit and people couldn’t handle it” https://t.co/lDrquGlWx6

“I had a whole supposed breakdown, alleged,” the 50-year-old told the industry publication. “All of this to be revealed in the book, by the way, which I’m obsessed with writing right now. It’s so cathartic.”

And while she doesn’t deny having suffered a traumatic episode, the GRAMMY winner refutes it had anything to do with her mental health.

“It was an emotional and physical breakdown, but it wasn’t a nervous breakdown, because you don’t recover from that really,” she added. “And even my therapist was like, ‘You didn’t have a breakdown; you had a diva fit and people couldn’t handle it.’” Mimi may have just  made “diva fit” a thing!

The “Vision of Love” singer will also delve into one of the lowest points of her career, the release of her 2001 movie Glitter and its soundtrack.

Proud to be in the company of such powerful, talented and beautiful women. Thank you @variety! And Thank you for acknowledging @thefreshairfund #campmariah 🙏💖 @chakaikhan #jenniferaniston @brielarson @danawal @awkwafina

The fact that both projects bombed critically and financially was problematic for Carey following a decade of success and on the heels of failed relationships with both ex-husband Tommy Mottola, and later on Latin singer Luis Miguel.

“I would say the 'Butterfly' album obviously is a huge turning point; thus, the name and the whole thing,” Carey continued. “And then fast forward, after the debacle that was 'Glitter,' which everybody can read about in the book, because it’s a real moment we’re getting into.”

While 'Glitter' was Carey’s least successful album at the time, debuting at #7 on the charts, 17 years later a viral campaign, entitled #JusticeForGlitter, helped propel it to the top of the charts in 2018.

“That was a huge achievement for [my fans] the Lambs, who by the way named themselves,” she revealed. “I did not name my fans, and I think it’s insulting that other people have named their fans.” Lady Gaga, Katy Perry and Rihanna are shook!