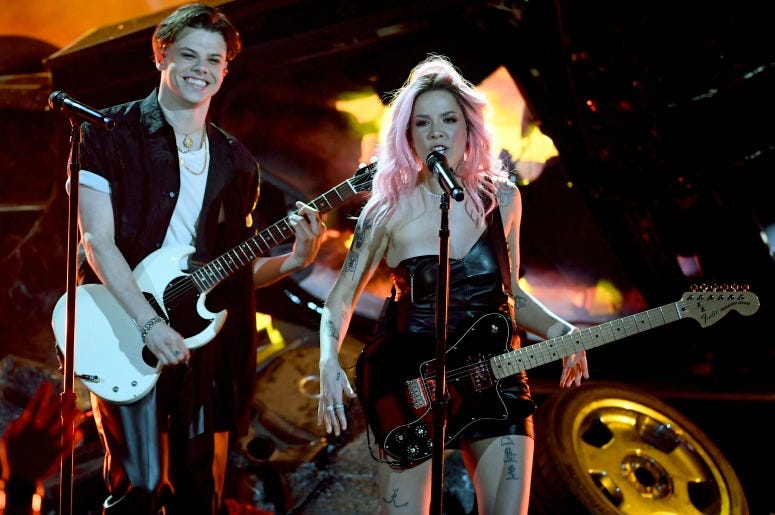 Halsey shared some extra love on Instagram on Monday, posting a collection of pictures of her boyfriend, Yungblud, in honor of his birthday.

Along with shots of the singer smiling, and photos of the two kissing, Halsey included a touching caption about how important he is.

“Darling Dom. Everyone who has met you in this life, for any amount of time at all, will be changed forever because of it” she gushed. “For some, in small ways they won’t even realize. For others, in a life changing wave.”

“Every single one of them will be better, from having crossed your path for even a second. You leave an irrevocable shine on every soul you come in contact with. Mine is gleaming. Happy birthday, I love you.

Yungblud, aka Dominic Richard Harrison, responded with a simple “I love you” in the comments and posted his own picture of the couple. Along with her dog, Halsey and Yungblud show off some Pokémon onesies.

“Thank you to everybody for all the birthday love” he wrote. “Can’t believe I found u all man.”

thankyou to everybody for all the birthday love ... can’t believe i found u all man 😝. eevee and snorlax sendin all the fookin luuuv 🖤🖤🖤

Halsey and Yungblud have been dating since at least the beginning of the year, and collaborated together on the song, “11 Minutes” in February, along with Travis Barker.

Earlier this year, Halsey admitted to us that she slid into Youngblud’s DMs after discovering his music.