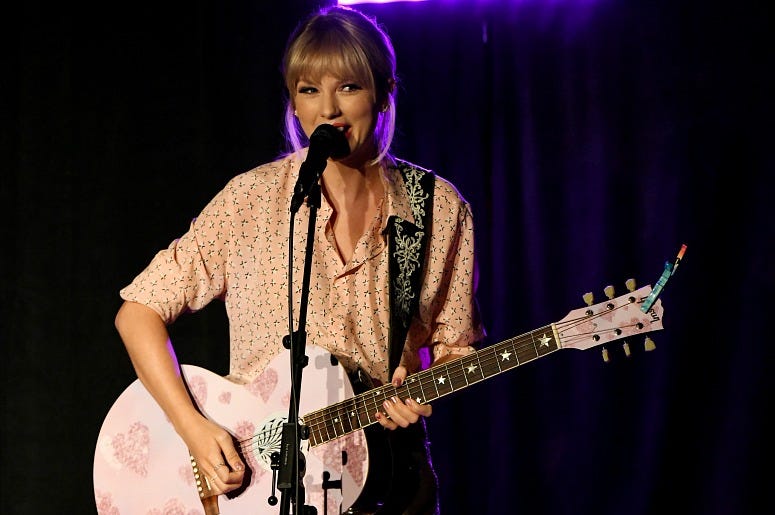 Lover arrives on August 23, and in a new cover story interview with Vogue, the “ME!” singer shares some new details about what to expect.

In between talk of the symbolism of her “You Need To Calm Down” video and Swift detailing her feelings in the Reputation era, Taylor previews two songs from the album with writer Abby Aguirre.

“I was compiling ideas for a very long time,” Swift tells Vogue. “There are so many ways in which this album feels like a new beginning. This album is really a love letter to love, in all of its maddening, passionate, exciting, enchanting, horrific, tragic, wonderful glory.”

With that, Swift plays Aguirre the title track from Lover, co-produced by frequent collaborator Jack Antonoff. “My heart’s been borrowed and yours has been blue” she sings in the song. “All’s well that ends well to end up with you.”

My heart’s been borrowed and yours has been blue. All’s well that ends well, to end up with you. 💙 pic.twitter.com/CECesxb8do

Swift also previews a song called “The Man,” which she notes, ““plays with the idea of perception.” On it, Taylor imagines how her actions and history would be interpreted if she were a man. The “thought experiment” is said to be a synth-pop earworm, where she wonders how things would be different.

“I’d be a fearless leader. I’d be an alpha type” she sings. “When everyone believes ya: What’s that like?”

Wanted to thank @abby_aguirre for writing such a thoughtful piece and for diving into my pastel cryptic world of hints, Easter eggs, and numerology. We also talked about sexism, equality, and all things Lover. I ate an entire cheese plate by myself. On stands soon-ish. pic.twitter.com/n9vP3Vbpql

Now that “The Man” and “Lover” have been confirmed, they join previously released songs “ME!”, “You Need To Calm Down”, and “The Archer” as 5 of the 18 tracks comprising Swift’s seventh album.

Lover is available everywhere on August 23.