You can’t become one of the biggest pop acts in the country without a dedicated fan base, and Twenty One Pilots certainly appreciates theirs. The Skeleton Clique has to be one of the best fan army names out there, and the group proves itself worthy of the moniker with their undying support every time a new single drops or the gates to a concert open.

Tyler Joseph and Josh Dun are acutely aware of the support, so much so that they struggle to put it into words at times. It’s hard for an artist to fathom how every word that turns into a lyric means so much to so many.

“I can think of specific moments and details of why we wouldn’t be here without you guys,” Joseph said during a recent Q&A with fans. “To know that in any way that we’re doing something outward, helping other people in some way – whether it’s bringing people together or starting a conversation with a stranger or whatever it is – we’re proud of that.” 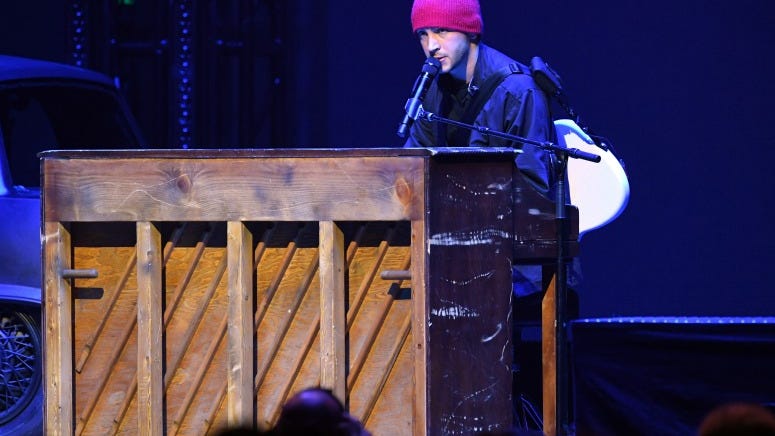 Joseph told RADIO.COM that he and Dun work hard to block out distractions that would affect their music, but he said fans will always be an influence. Dun added that the changing times and endless entertainment options make him even more grateful for their fans.

“In a culture where music comes and goes seemingly a little quicker than it used to for us growing up, for them to stick around means that much more even,” he said.

The Skeleton Clique has its own Twitter account with more than 345,000 followers. It’s loaded with fan art, concert video clips and other tributes to the duo from Ohio. Some members like to consider their group the most inclusive clique out there, so if you’re not yet a member and would like to see what all the fuss is about, Twenty One Pilots will be coming to a city near you on their fall tour.
It starts October 9th in Tampa and ends November 9th in Tulsa. Check out the full schedule here.