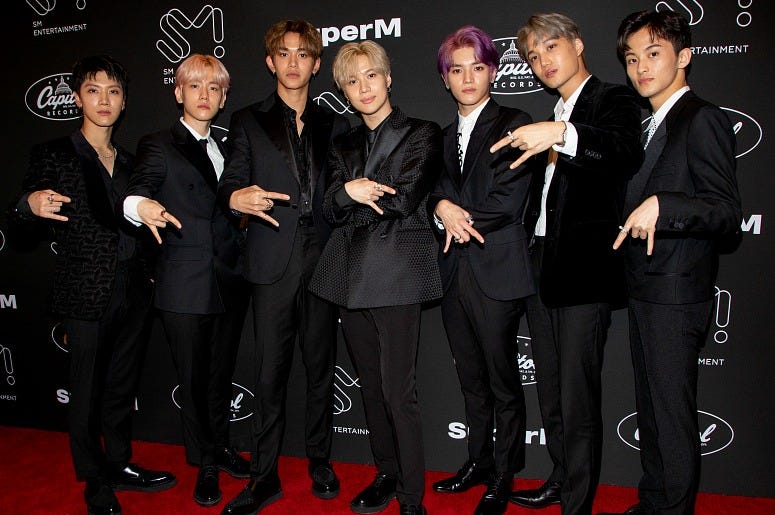 These days, K-pop comes at you pretty fast. If you don't stop and look around once in a while, you could miss it.

Who are we kidding? It’s almost impossible to miss. The elite choreography and effortless blend of voices is seemingly around every corner of the internet. However, there is always someone new ready to rise to the top, and this week’s it is SuperM.

In a staggeringly short amount of time, this K-pop supergroup has jumped to the front of the line and has taken the top position on the Billboard Top 200 Album Chart. The 7 song, self-titled “mini album” blasted past DaBaby and Post Malone this week to capture the crown, bolstered by the smash “Jopping.”

The song is jumping and popping with a rock edge, filtered with some industrial dance and an unshakable chorus. It’s custom-built to send a stadium into a screaming fit, or to soundtrack your own personal swagger session.

SuperM didn’t even exist until August, and now they are the biggest group in the country. But who are they and how did they get to the top so quickly?

It’s actually through years of experience, with each of the supergroup’s members already having success in their own K-pop group before coming together under the SuperM name. Each existing within South Korea’s SM Entertainment, the members are also a part of a few of the finest K-pop collections already established. SuperM includes Taemin from SHINee, Baekhyun and Kai from EXO, and Taeyong, Mark, Ten and Lucas from NCT and sub-units NCT 127 and WayV. Together they join forces, for some powerful songs and chart-topping numbers.

SuperM is the first K-pop group to hit number one with their debut album, and fans can’t wait to see what’s next. SuperM will kick off a 10-city North American tour on November 11, stopping in Chicago, Atlanta, New York, and more. You can find the full list of dates below.