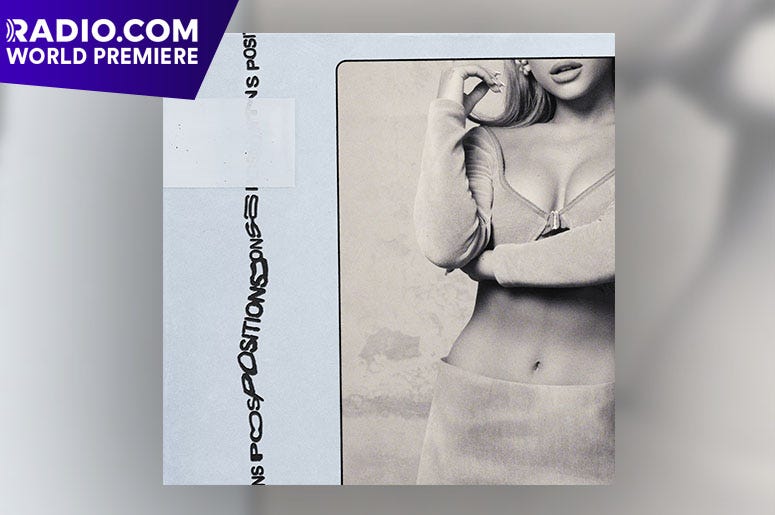 In a year full of new surprises, Ariana Grande has not been one to hold back on the surprises that err on the more joyous side of things. From her epic “Rain on Me” collaboration with Lady Gaga to dropping “Stuck with U” with Justin Bieber, to a killer live performance at the 2020 VMAs, Ari and her life raft of a ponytail have basically been keeping us afloat in a sea of despair.

Now we can add a single and full new album to the list of delights that Grande has served us in 2020. It seems as if the promotion for “Positions” and Ari6 arrived at light-speed. One day Grande was posting on social media about her cute pack of pups and the next she was giving us downright teasers for new music. From sharing short vocal samples on Instagram to cryptically typing out "Positions" on a glowing computer keyboard, the "7 rings" singer has been making us feel extra "needy" for a reveal of what's to come.

“Positions” has arrived and we are giving you the World Premiere we know you needed. You will be able to listen to “Positions” throughout the day on October 23 on your favorite RADIO.COM Pop station and on the RADIO.COM app.

On October 14th the superstar took to her social media platforms to say to her fans “I can’t wait to give u my album this month.” Her teasers arrived as quickly as the new “Positions” era of Ari was ushered in.

But okurrr, Madame President. “Positions" has us thinking we’d be a lot better off under a Grande Administration. Not only is the new track completely sultry, but Ari is giving us full Jackie O., glam, realness.

Aside from the mod 1960s looks and the seductive lyrics that Ariana serves, the entire video makes it loud and clear that the artist yearns to see a shift amidst those who hold positions of power within the U.S. government. As we peer into a Grande Administration Cabinet meeting, we see women of all backgrounds with a seat at the table, not to mention, Ariana even includes her mother, Joan Grande as a Cabinet member.

Ariana juxtaposes her seat in the Oval Office with shots of her cooking in what we can presume to be the White House kitchen. “Positions” isn’t just a nod to what Grande can accomplish as a romantic partner, but is also a nod to the idea that women can be successful both in positions of power and more “domestic” roles. In 2020 it most certainly does not have to be one or the other. As Ari shows us, the modern woman could absolutely lead an entire nation and still cook a bomb meal, if she so chooses.

No pun intended, but the timing of this music video is just * chef’s kiss * perfection. "Positions" arrived just a few hours after the final Presidential Debate in 2020, and just 12 days before the election. The globally adored pop star has been outspoken on social media about the importance of voting. Her musical endeavors this year have coincided with messaging about how to be engaged in the 2020 election.

We hope that “Positions” is an optimistic foreshadowing of what is to come for our country. The future and possibilities that Ari briefly laid out for us in her two minutes and fifty-second music video, certainly gives us a lot of hope.

The Ari6 era has just begun and we are already eating it up.