“You’re finding out more now than we’ve ever done before,” explains our tour guide, hours before Ghost takes the stage.

Behind the stained glass windows and gothic arches where the Nameless Ghouls shred through the GRAMMY-winning band’s set, we’re perched at the top overlooking the drums and keyboards. It’s a big production of lights and pyro, with multiple moving parts all working together to keep the mystery alive. This epic live show is part of why Ghost has become such a force in the world of rock, and we got a behind-the-scenes peek in the exclusive video above. 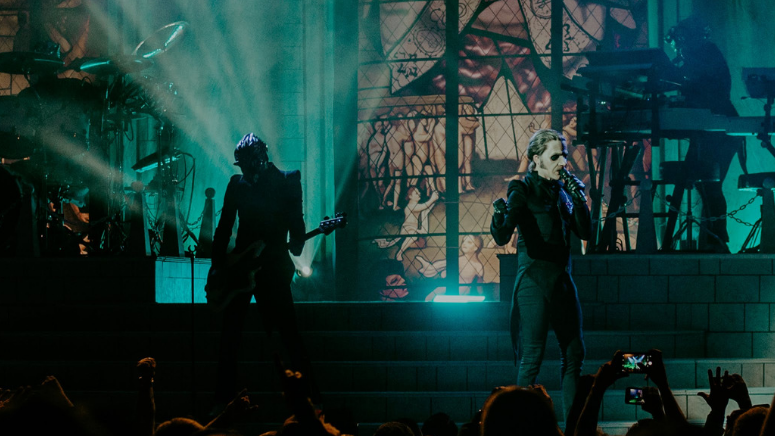 On Tour: At The Altar With GRAMMY-Award Winning Ghost

“Here we are, behind the stage,” he explains as we snake through the metal scaffolding to a rack of guitars. “Stage left guitar world,” our guide says with excitement. He's known by the name George, which is a lot in the world of Ghost. “We like to keep a bit of mystery with Ghost. We try to, as much as people know more and more about it.”

“People know our guitar players. This is the white guitar player’s little world with Hagström guitars in there. We’re kind of a classic sounding rock band with a very high-tech world,” he adds.

As we make our way back up another level, we cross paths with the Cardinal. He appears in a velvety red suit, offset by his stark white face. “What’s going on here?” he asks, shifting quickly. “Just doing a little tour for everyone,” our guide explains cautiously.

“Alright. Cool,” the Cardinal says, searching his eyes around the set. “I’m just making sure things are okay.” His eyes dart around, landing on a gentleman against the wall. “Have you met uh, we call him Jesus,” he says as he walks over beside him.

“His name is Kevin but we call him Jesus because of the beard and long hair and he always makes us happy, and you know, that’s typical Jesusical treats,” Cardinal Copia explains as Kevin smiles coyly. “You know the story about Jesus right? How he rode in on an ass. Your mother’s ass,” he laughs.

“I guess that was the Cardinal and I guess that’s that then,” our guide says quickly, as we are whisked out of the mysterious world of Ghost.

Ghost continues their Ultimate Tour Named Death this month across North America, before returning to Europe in November. You can find the full list of upcoming dates here.