Kirk Hammett has talked openly about being more than ready to contribute to a new Metallica album, and he’s not backing off that claim at all. There will be an 11th studio LP sometime in the next few years, and Hammett hopes to play a major role in it.

The guitarist hopped in the passenger seat for Cosmo Music’s “Rockstars in Cars,” and indicated his creative juices are flowing.

“As it stands, as we speak, I have a lot of material — really kick-a**, great material — that I just can’t wait to show the other guys and turn into some music, record, get the album out and have more kick-a** metal,” he said.

Hammett said he didn’t contribute as much as he had wanted to on Metallica’s last album, 2016’s Hardwired…To Self Destruct,” because of a devastating mishap that knocked him off-track.

“I didn’t have any stuff, ’cause I lost most of my ideas when I lost my phone — over 500 musical ideas,” he recalled. “It took me a long time to recover from that. And I got it into my head I had to produce twice as much (for the next album) - basically, I overcompensated.” 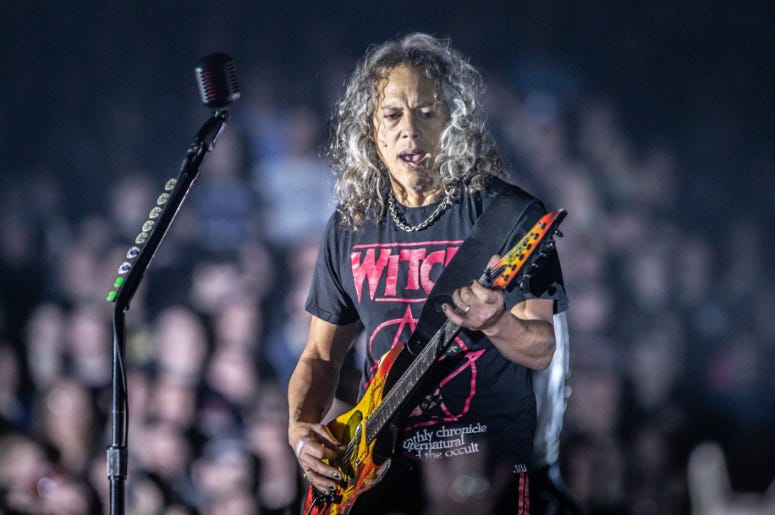 Metallica is on a break from touring while frontman James Hetfield deals with addiction, but the metal legends just announced they will headline five U.S. festivals next summer. There could be some time to enter a studio in the winter, if the band so chose.

In the meantime, Hammett is keeping his fingers moving by sitting in with some of the best in the business. He joined UFO on-stage at the Avalon in Hollywood over the weekend. While UFO was never much of a mainstream band, Hammett is among the countless musicians who cite them and former guitarist Michael Schenker as major influences.

“I have been playing the song ‘Shoot Shoot’ for all my musical life,” Hammett gushed on Twitter while providing a clip. “It was amazing to play it with them.
Thanks to Paul and Andy Neil and Vinnie and Rob for such a great time last night.”

I having been playing the song Shoot Shoot
for all my musical life , it was amazing to play it with them. Thanks to Phil and Andy Neil and Vinnie , and Rob for such a great time last night ! https://t.co/vm7PNTJdUX