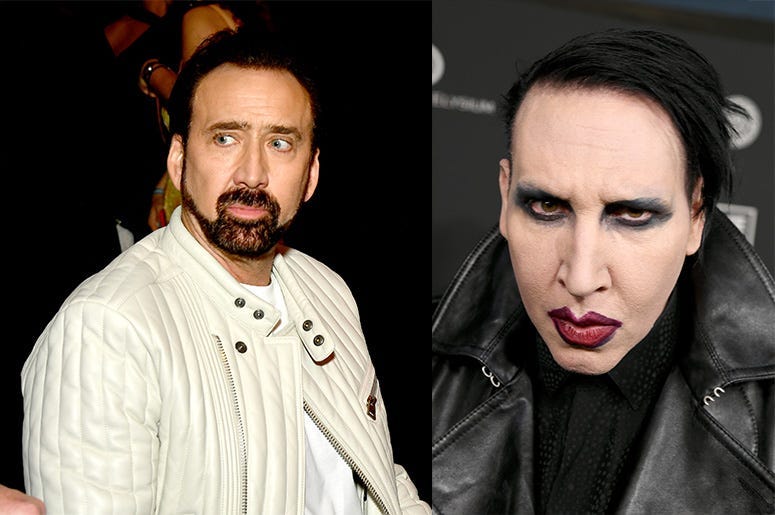 As if 2020 couldn’t get any weirder, the vaunted actor sat down with the shock rocker to chat for Interview magazine and revealed strange tendencies and peccadillos. “I just bought a crow,” Cage tells Manson. “His name is Huginn, after one of [the Norse god] Odin’s two ravens, Huginn and Muninn, and he’s amazing.”

Manson asks if the bird is very talkative. “He says 'hi' when I walk into the room and 'bye' when I leave,” Nick responded. “The other morning he started laughing and called me an a*****.”

We don’t have much personal experience speaking with Nicholas Cage, but RADIO.COM imagines he’s a pretty affable guy with some great stories from the Hollywood strip. Why wouldn’t a crow think the same?

“He likes to eat cat food, which makes it easy, because I give my cats Sheba Perfect Portions, and Huginn enjoys it as well. I think he has a sense of humor, so maybe that’s why he called me an a*****,” Cage complains to his famous interviewer.

A conversation between #NicolasCage and #MarilynManson.

The two celebrity friends spend most of the interview discussing favorite movies/music, trips to Las Vegas and favorite career moments. Cage even told Manson “your version of 'The End' by the Doors is probably the most powerful thing I’ve heard in the last ten years, so thank you for that.”

Something that didn’t come up in conversation was Nick’s upcoming role as Joe Exotic in an eight-episode scripted series based on the wildly popular Netflix docuseries "Tiger King."

Meanwhile, Manson has been busy making new music. He released a brand new album WE ARE CHAOS, back in September.