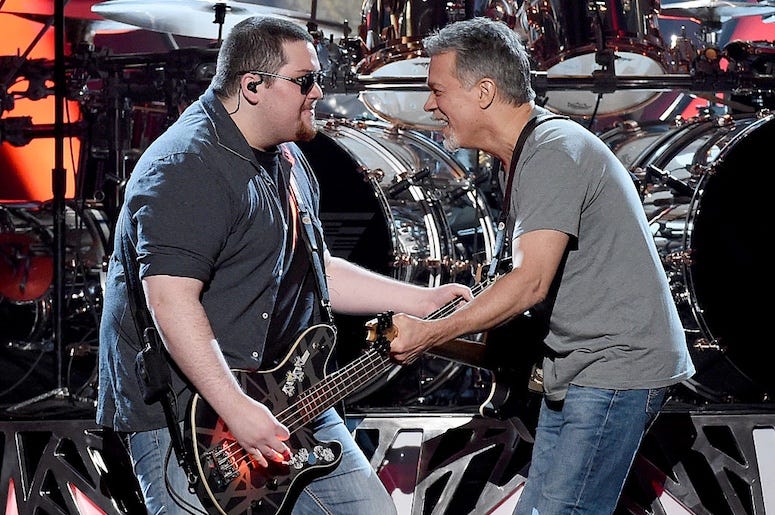 Grab a tissue, you’re going to need it to wipe away the tears.

Wolfgang Van Halen marked the official debut of his solo career with the release of “Distance.” Van Halen, going by the moniker Mammoth WVH, dropped the music video for “Distance” and it’s entirely composed of old home movies featuring the Van Halen family.

The video opens with a young Wolfgang on a staircase telling his father to come meet him up in the drum room. Behind the camera, Eddie Van Halen tells Wolfgang “we gotta clean up above the garage and build a studio for you and me, or for you.”

The music kicks in and the rest of the video features a montage of clips of Eddie and Wolfgang throughout the years. From a baby Wolfgang sitting on dad’s lap while he teaches him to play piano, the two playing around the house with one another, highlights from family vacations, and concluding with Wolfgang and Eddie sharing the stage with one another as part of Van Halen, it’s an incredible tribute video that’ll surely bring a tear to your eye.

“As my pop continued to struggle with various health issues, I was imagining what my life would be like without him and how terribly I’d miss him,” Wolfgang wrote in the video’s description.

“While the song is incredibly personal, I think anyone can relate to the idea of having a profound loss in their life. I never intended ‘Distance’ to be the very first piece of music people would hear from me, but I also thought my father would be here to celebrate its release. This is for him. I love and miss you, Pop.”

Not a second goes by where you’re not on my mind.

I love you so much, Pop.

It’s really hard being here without you. pic.twitter.com/U2taNK255h