It was only a matter of time (give or take a week) before Baby Yoda toys took over the galaxy.

The real star of “The Mandalorian” now has his very own Funko Pop.

The official Funko blog gave fans a first look at their adorable bobble-headed version of the green baby that stole millions of hearts and almost broke the Internet.

Though he may look like a young Yoda, the little alien is officially known as “The Child.”

Despite being depicted in an egg-shaped floating crib in the series, the Funko Pop Baby Yoda (we’re still calling him that) stands tall and proud in his fuzzy brown jacket.

He’s also holding his little finger up to either summon the Force, press the red button in the Mandalorian’s ship, or change the radio station.

are you kidding me pic.twitter.com/occtAetXqs

While Baby Yoda will be available everywhere Funko Pops are sold, he won’t be on sale in time to stuff Christmas stockings of your fellow “Star Wars” fans. 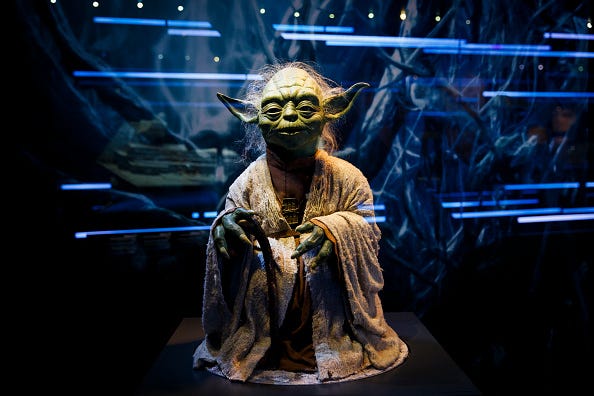 According to the blog, the Child Funko Pop will be hitting shelves some time in “early spring."

There is an option to pre-order the little guy, which is a relief because that means you don’t have to channel your inner Bounty Hunter to get your hands on him.

Since Baby Yoda became an overnight sensation, Disney rushed production on things like hats and cups to capitalize on the 2019 holiday season. You can find those here!

The Funko Pop is only the beginning of a slew of Disney+ merchandise starring the baby alien, which also includes an 11-inch plush from Mattel that's also available for pre-order.