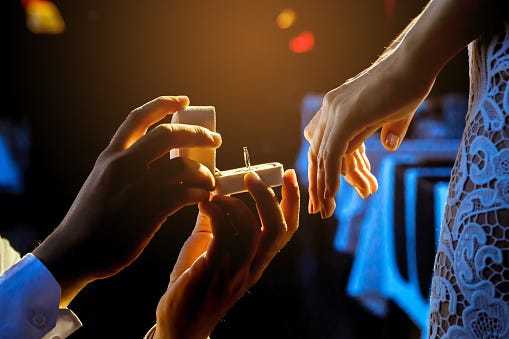 Survey says, this proposal is adorable!

A North Carolina man channeled his inner Steve Harvey to pop the question to his girlfriend during a playful game of “Family Feud,” reported USA Today.

Attn: @IAmSteveHarvey. This Family Fued-style proposal is the sweetest. "Name a day a woman always dreams of." https://t.co/IwknlKZFGA

While decked out in festive holiday sweaters, Joshua Powell read out prompts in the style of the iconic game show as his girlfriend, Kiana Myrick, stood with her back facing him.

"We surveyed 100 women," Powell began as friends and family stood around watching. "Name a day a woman always dreams of."

"Her wedding day," Myrick replied without skipping a beat.

"Name something a woman wears all white to..." Powell continued in a series of rapid-fire wedding-related questions, before finally getting to the business at hand.

"How would you finish this? Will you marry me?"

Congratulations to my son Joshua Powell and future daughter Kiana Myrick. This was the dopest proposal ever!! We played...

"Yes, I will,” Myrick hesitantly responded as she began to turn around appearing perplexed.

“You might as well make it official, right,” Powell said as he got down on one knee.

Realizing what was happening, Myrick’s jaw dropped as her friends and family let out cheers of excitement.

“I love you with all of my heart,” Bell began his heartfelt speech. “Through everything we’ve been through, baby, we managed to keep God first. And now eight years later, we’re here –I’m looking for 88 more. Will you marry me?”

After Myrick said yes, her future mother-in-law shared the clip on Facebook, where it has since garnered over 1.9 million views and shared over 31K times.

After getting time to process the huge surprise, Myrick described what was going through her mind as Powell was popping the question.

"I just put my head down and kind of just focused, it didn't even dawn on me that he was about to propose," she told CBS News affiliate WNCN.

“I just wanted to give her what she deserved and now it’s like a million views later, like wow that’s amazing,”Powell added.

Together since high school, the couple plan to marry in 2021 after they graduate college.