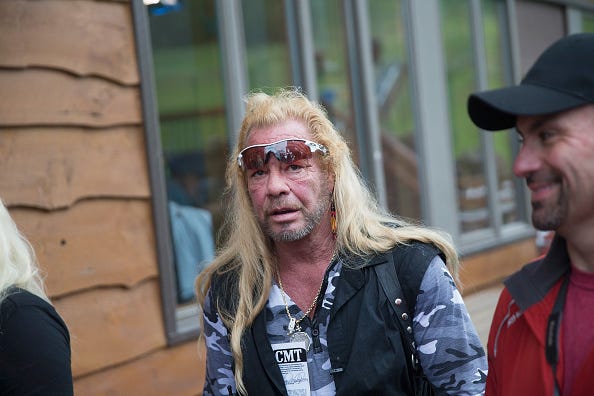 A week after his souvenir shop was burglarized, Duane “Dog The Bounty Hunter” Chapman became the target of a six-figure email scam.

The scheme began when Chapman was offered $430K to fly to Dubai to speak at an economic empowerment convention for small business owners, according to TMZ.

The offer initially seemed legit because it appeared to have come from the office of the actual Deputy Prime Minister of United Arab Emirates, Sheikh Mansour bin Zayed Al Nahyan.

After signing off on the deal, Chapman and his agent started to notice the red flags when all communication was done over email, which the Dubai organization claimed was due to the 11-hour time difference.

Things got even more fishy when the organizers claimed they were having issues wiring funds to Chapman’s bank and wanted his agent’s personal account instead. Ring the alarm!

At this point, Chapman realized it was a scam and was ready to pull the plug when an actual check for more money than they agreed upon arrived via FedEx. The reason there was extra money was because the organizers wanted Chapman to donate $250K of it back to the Dubai organization.

Law enforcement got involved and disclosed that other celebs have been hit with a same scam.  According to TMZ, if Chapman had deposited the check, the funds would vanish from his account a few days later. In addition, if he had sent back the $250K that was requested, it would've come out of his own money.

While he luckily avoided the scam, Chapman is still trying to find out who ransacked his Colorado shop last week.

“Not only did the thieves take thousands of dollars of clothing, these criminals took priceless personal belongings of our beloved Beth, including tributes to her kindly left by our amazing fans," Chapman said in a statement.

Although no one has been arrested, police allegedly have several leads.

All this comes as the 66-year-old continues to mourn the death of his wife, Beth Chapman, who passed away from cancer on June 26th.