Even though "Friends" ended 14 years ago, it's hard to think of a time since when the cast hasn't been theeeere fooooor youuuuuu.

The classic sitcom's stars have gotten fans riled up over the last few months of 2019, which marks the show's 25th anniversary.

After strings of impromptu and record-breaking Instagram selfies, "Friends" followers are being borderline tortured even by the hint of some type of reunion.

To hold us over until a more definitive update, we've put together this gallery of all the times Phoebe, Monica, Ross, Chandler, Joey and Rachel hung out IRL since the show ended.

This is the motherload that "Friends" fanatics have prayed for. The selfie that Jennifer Aniston used to kick off her Instagram account broke her non-lurking account page and the royal record for fastest 1 million followers on the social media platform.

A rare night and I love it.

One of the warm-ups for the Aniston shot seen 'round the world, this adorable selfie that Courteney Cox posted 10 days before had fans in a Friends-y and wondering if there wasn't some big announcement around the corner.

Trying to play it cool with all this heat. #friends25

Courteney Cox knows what she's doing. She posted this pic of herself with former castmate Lisa Kudrow, and unexpected cameos from Cox expert Charlie Puth and Judd Apatow.

Happy 4th everyone! I’m lucky to be spending it with so many girls that I love ♥️

Nothing is more American than a "Friends" reunion. Courteney Cox posted this power selfie on July 4th, featuring herself, Aniston, as well as Suzanne Somers, Laura Dern, and jewelry designer Jennifer Meyer.

Girls night baby! Lisa Kudrow posted this selfie with her other female costars from the show back in June.

Just remembering Court, I will ALWAYS be older than you. HAPPY BIRTHDAY lovely Courteney!!

You know Phoebe had to get in on the action. Lisa Kudrow shared this filtered-out photo of her and Courteney Cox the day after Cox's birthday. In a very Phoebe-like caption, Kudrow taunted Cox: "I will ALWAYS be older than you."

How lucky am I to celebrate my birthday with these two??? I love you girls. So much ♥️

It was surreal for fans to see Phoebe, Monica and Rachel together again for Courteney Cox's 55th birthday in June. The love was still deep between the show's female cast. Cox captioned the photo, "How lucky am I to celebrate my birthday with these two??? I love you girls. So much." Heart emoji.

Because Ellen knows what we want. In January, the talk show host set up a secret reunion with Monica and Phoebe. Kudrow stopped by for moral support when Cox was getting ready to take the leap and join Instagram. 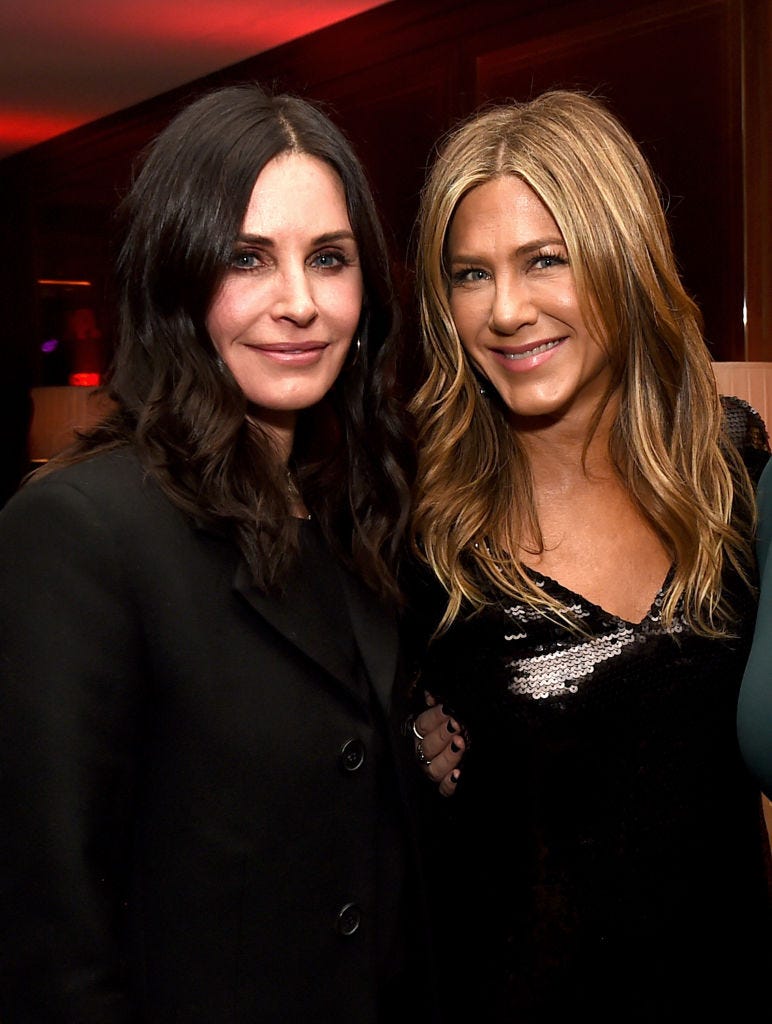 Cox showed up to support her girl at the LA premiere of Aniston's "Dumplin." 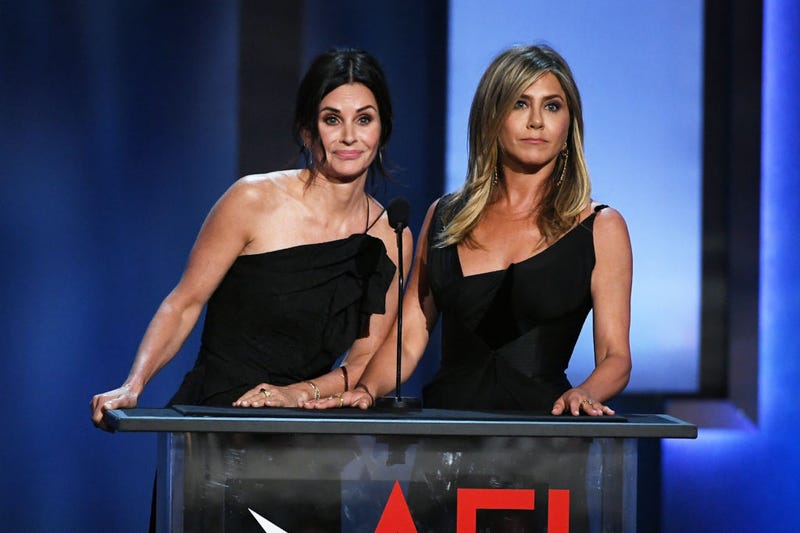 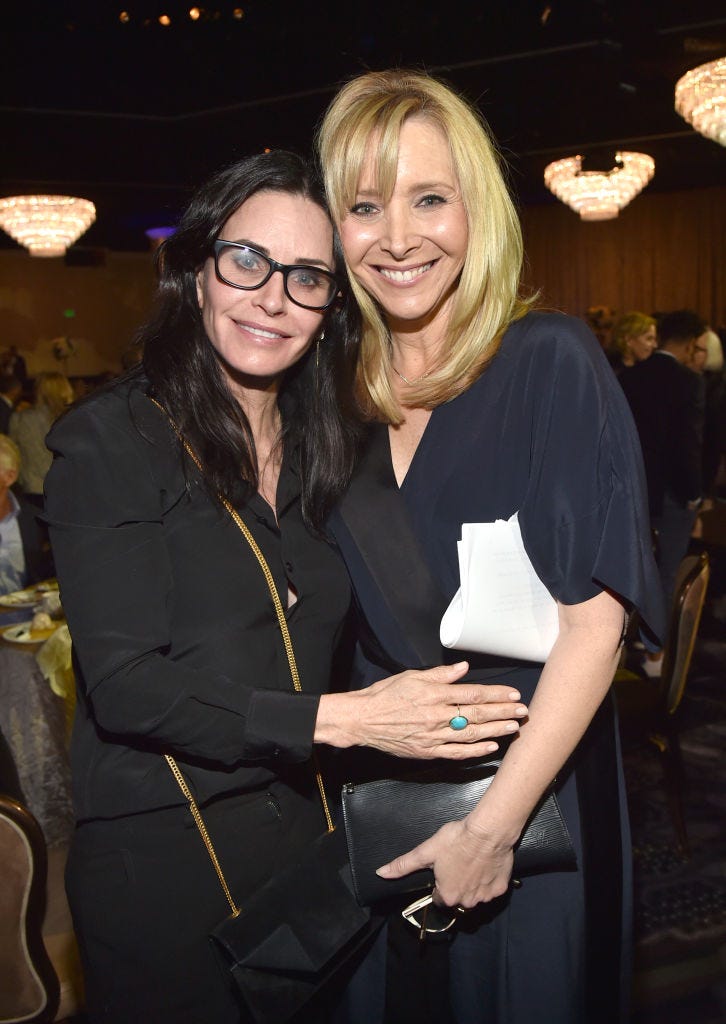 Courteney Cox popped out to the Open Mind Gala in 2017, and who better to host than Lisa Kudrow? 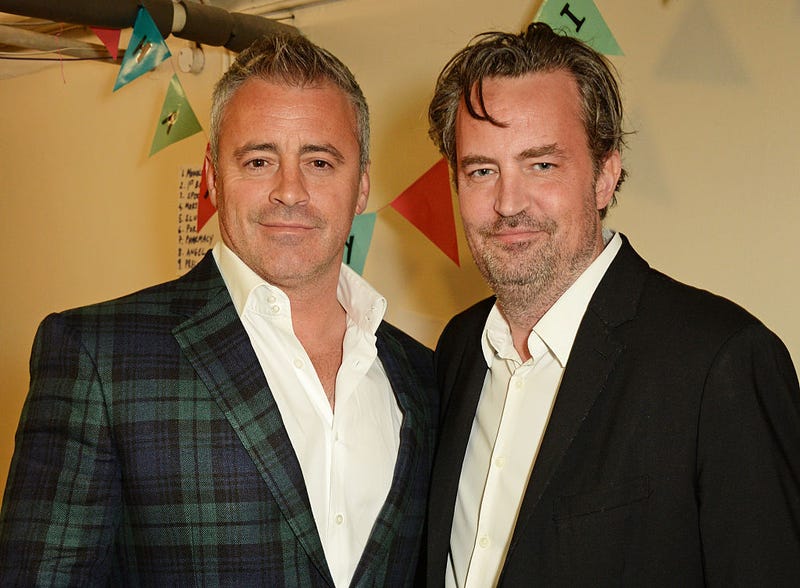 How you doin'? Joey and Chandler backstage after a performance of "The End of Longing," Perry's playwriting debut. 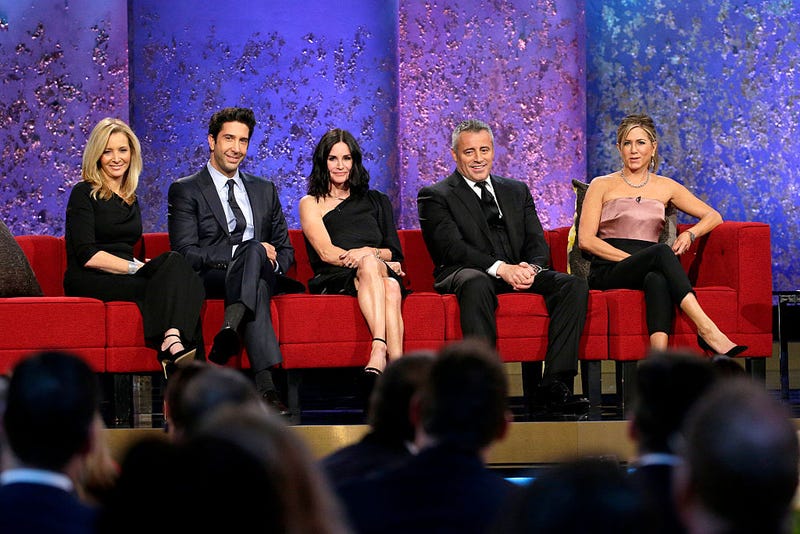 2016 was like the Dark Ages! Before we were spoiled with several "Friends" reunion selfies a month, we had to hold our breath for a moment like this with five cast members at this All-Star Tribute to James Burrow. Where's Chandler!!! 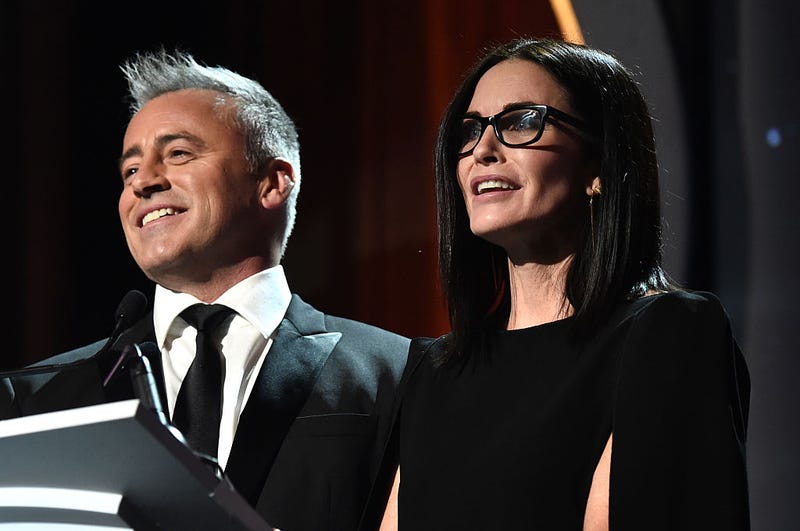 LeBlanc and Cox presented onstage together at the 2016 Writers Guild Awards in Los Angeles. 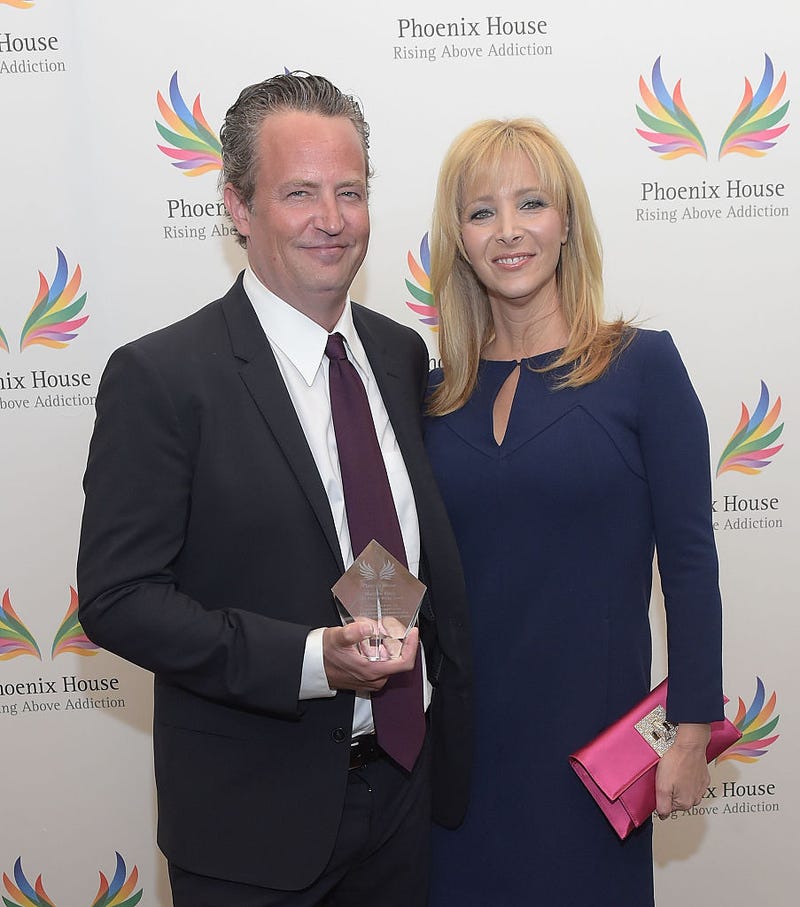 Chandler and Phoebe are for the youth. Perry and Kudrow took this picture at a gala for teens who overcame addiction in 2015. 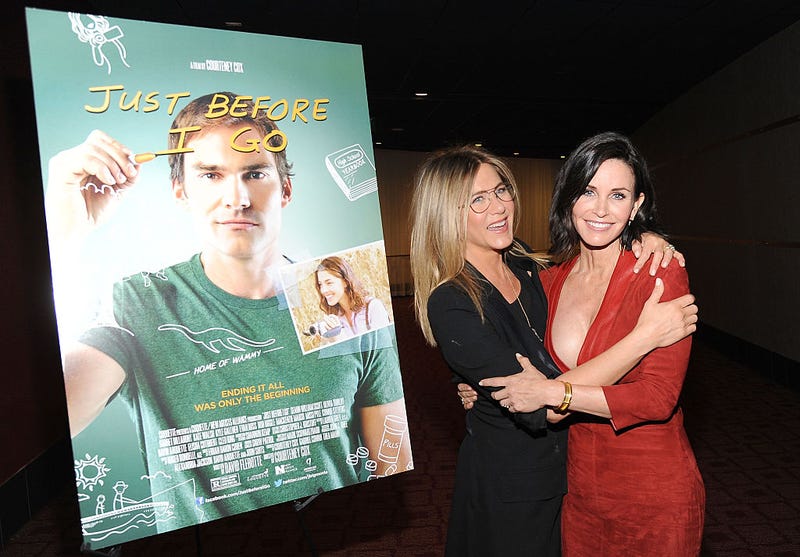 Dude where's my friend? Rachel and Monica reunite at the Hollywood premiere of the Cox-directed "Just Before I Go" starring Seann William Scott.

This is what friends are for. Aniston and Kudrow let it fly in this celebrity curse-off on "Jimmy Kimmel Live" in 2014. 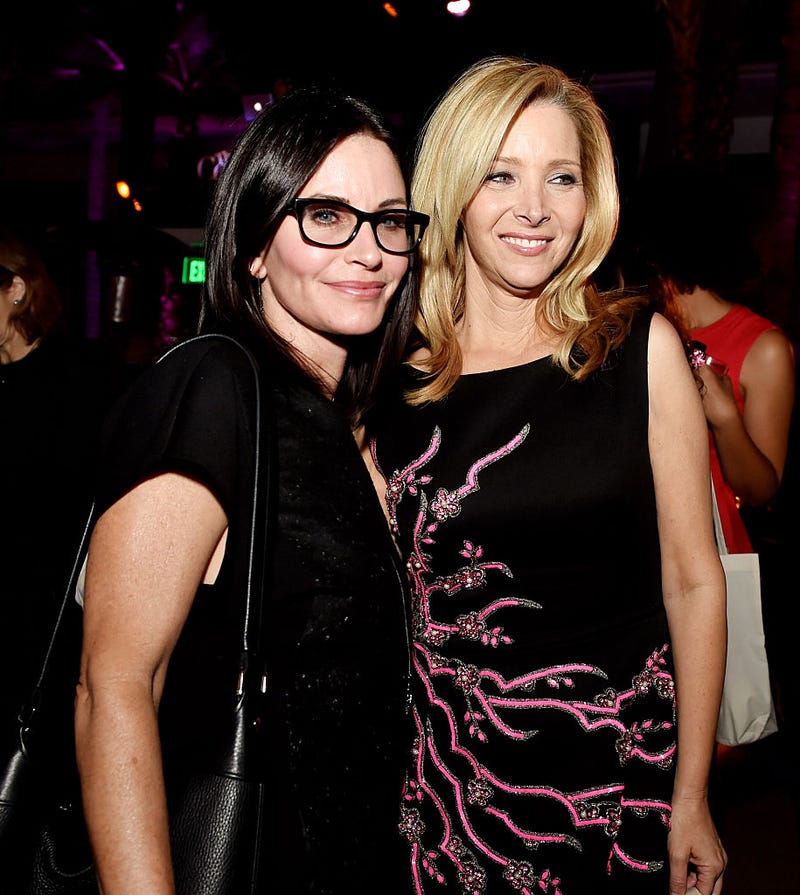 Talk about a comeback! Cox and Kudrow got a pic together at the after party for HBO's "The Comeback" which stars Lisa.

Things got weird when the girls from "Friends" did a fanfic skit at Jimmy Kimmel's own little "Friends" pop-up on his show. 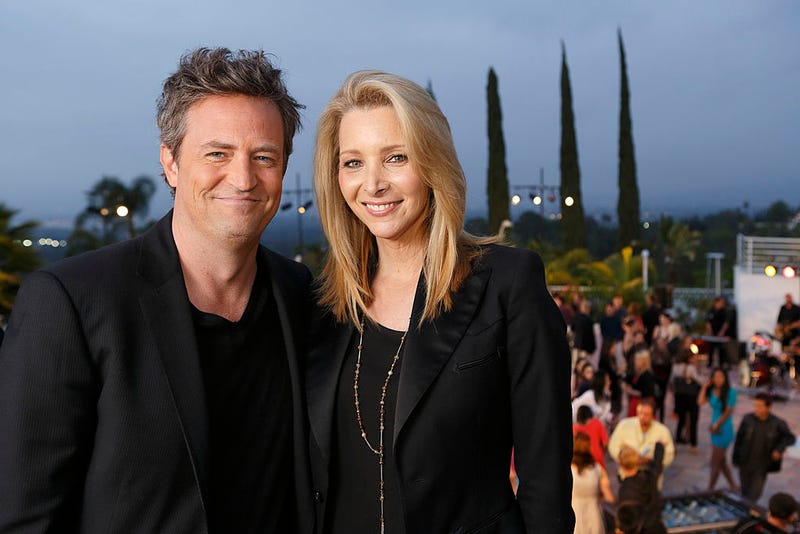 Perry and Kudrow both appeared on Hollywood Game Night in 2013. 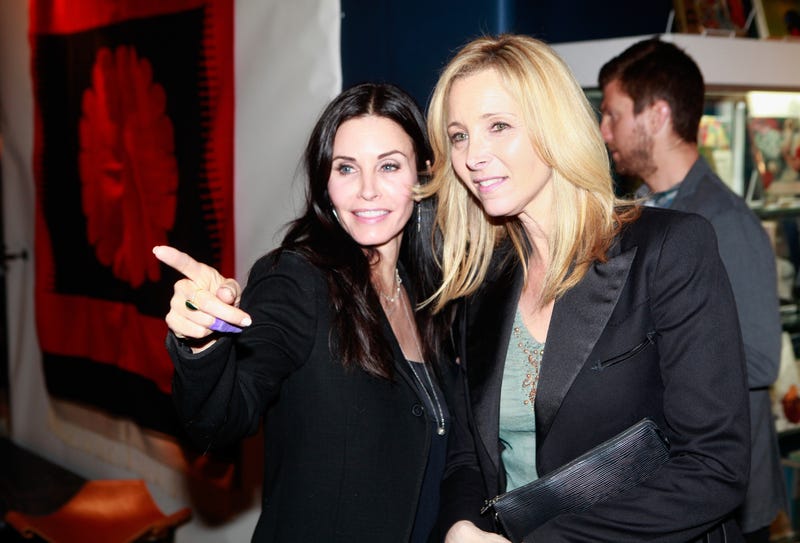 This one is sooo New York. Even though it's in LA. The IRL Monica and Phoebe were spotted at this Modernism show opening in 2013. The irony of course being that the best work of modern art is "Friends." 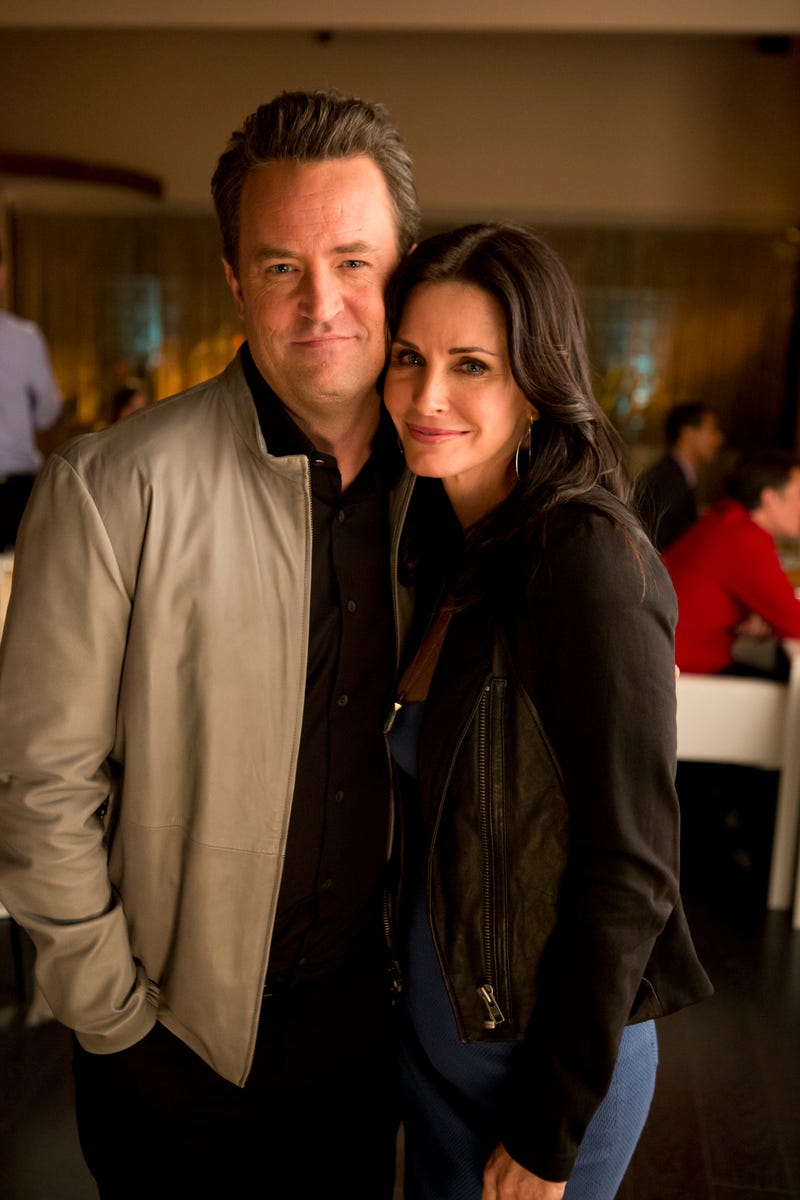 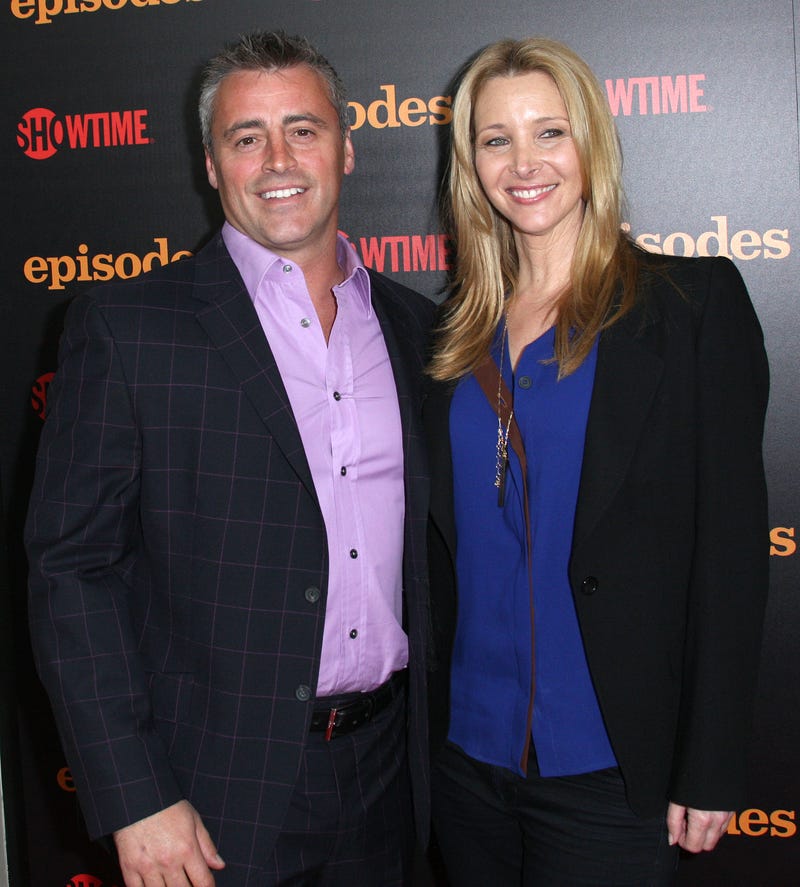 Joey really did make it as an actor. Kudrow showed up to support the season 2 premiere of LeBlanc's show "Episodes" in 2012. 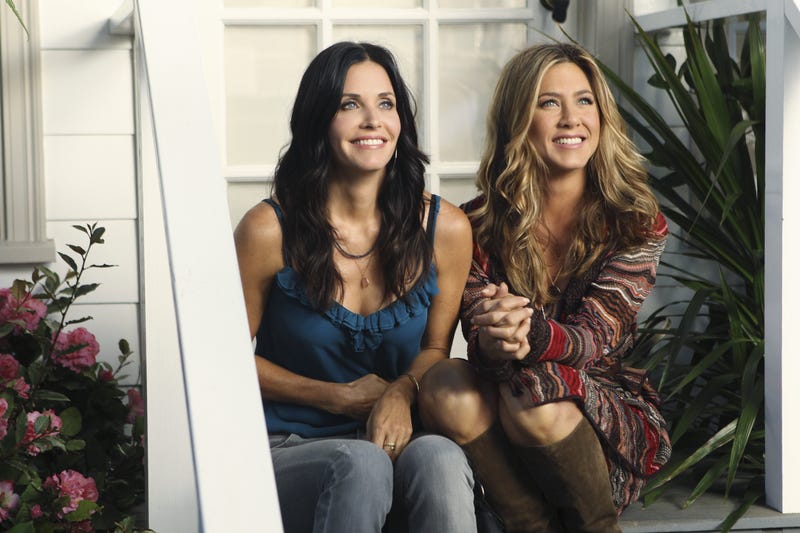 Aniston guest starred on the season 2 premiere of Cox's show "Cougar Town" back in 2010. 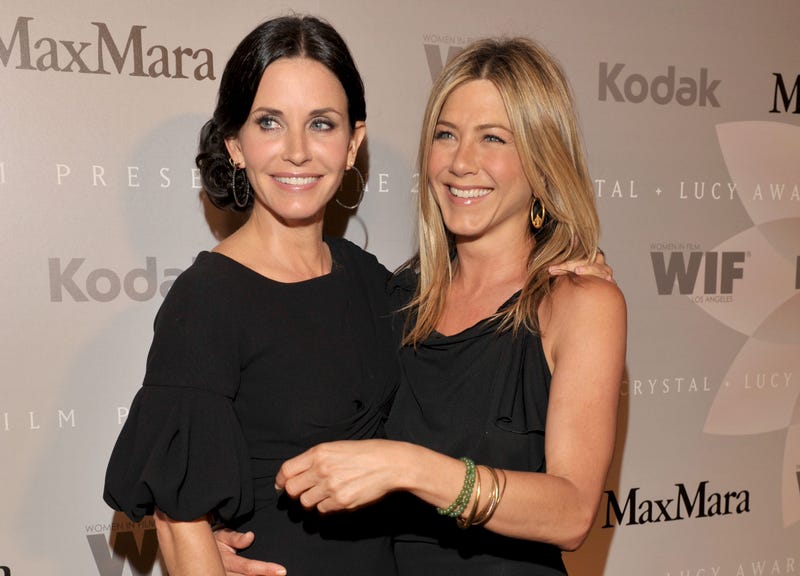 Aniston reps for the homie, honoree Courteney Cox, at the 2010 Crystal + Lucy Awards. 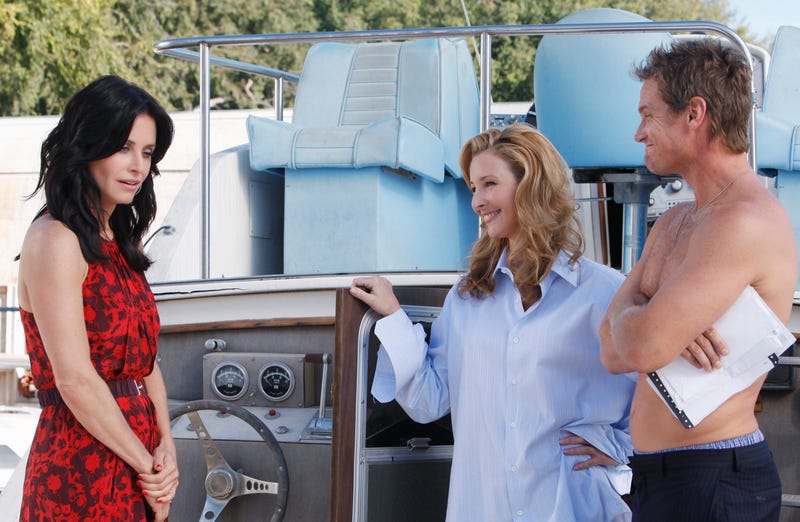 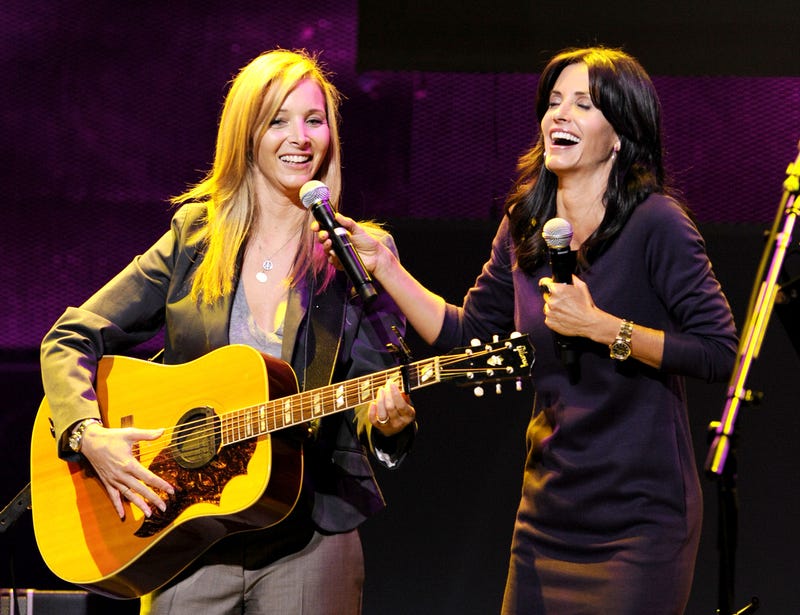 Phoebe with a guitar on stage with Monica is catnip at best and torture at worst for a "Friends" fan fiending for a reunion. 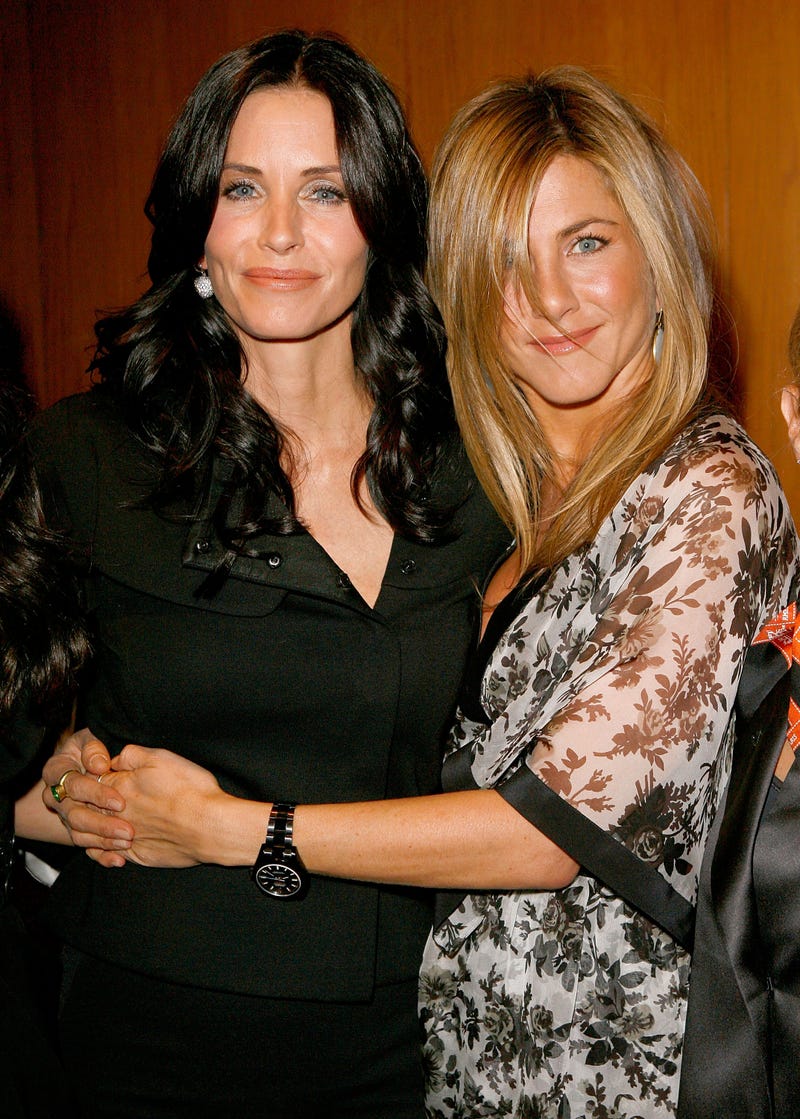 Cox and Aniston buddy up at the premiere of "Glamour Reel Moments" in 2008. 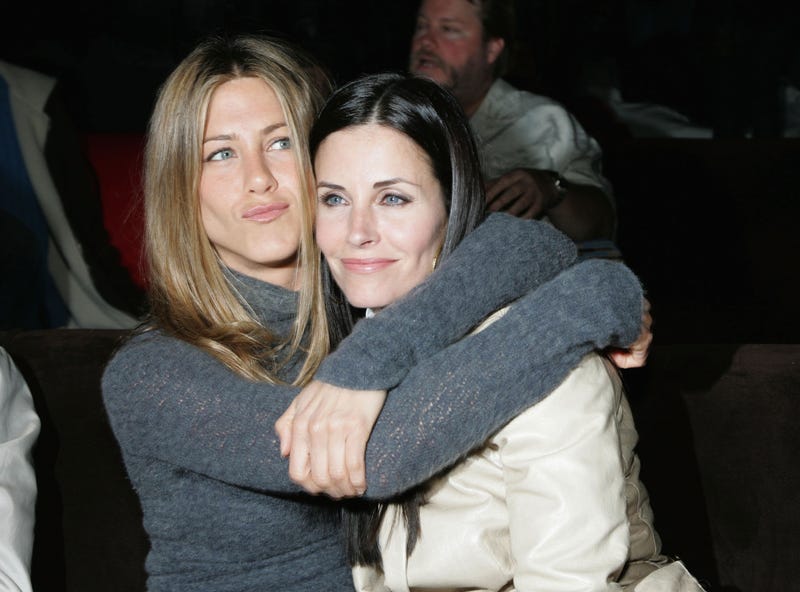 Trippy seeing your friend three years after your hit sitcom ends. Aniston and Cox brought it in for a big hug at the LA premiere of "The Tripper" starring Cox's now-ex David Arquette. 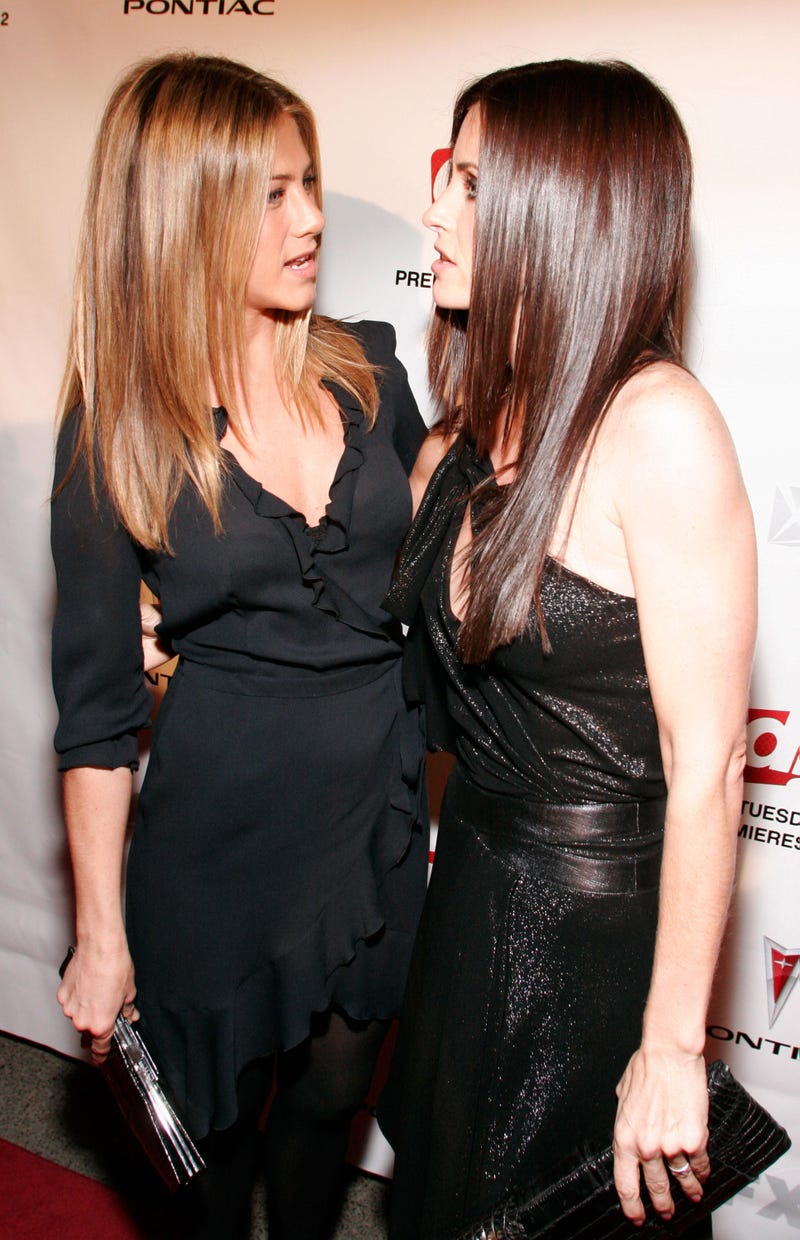 Aniston and Cox getting in there for a pic at the 2006 premiere of "Dirt," co-produced by Cox and David Arquette and starring Cox. 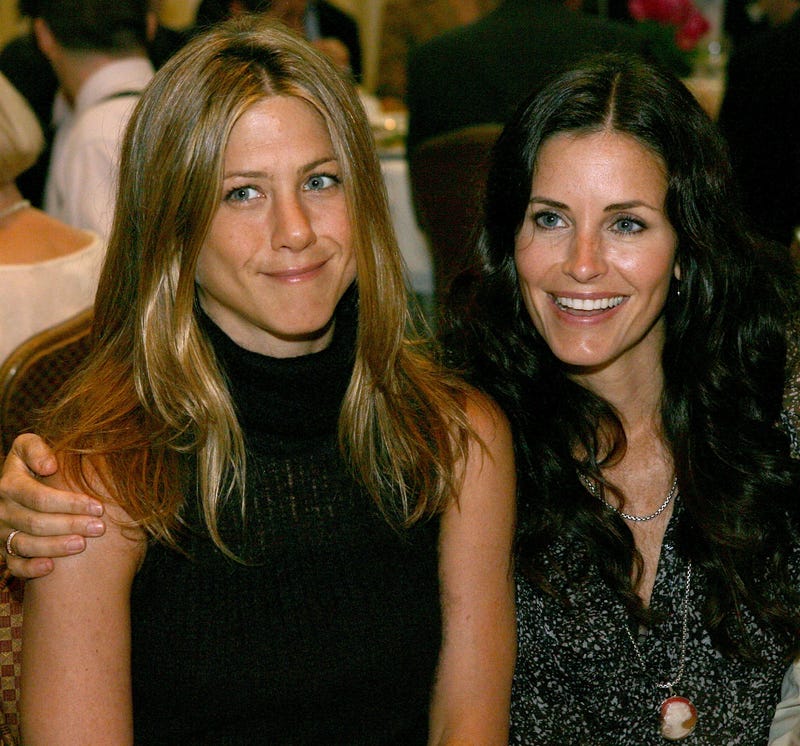 Lunch date, it's what friends do. Aniston and Cox both attended an AFI Associates luncheon honoring the Arquette family in 2006. 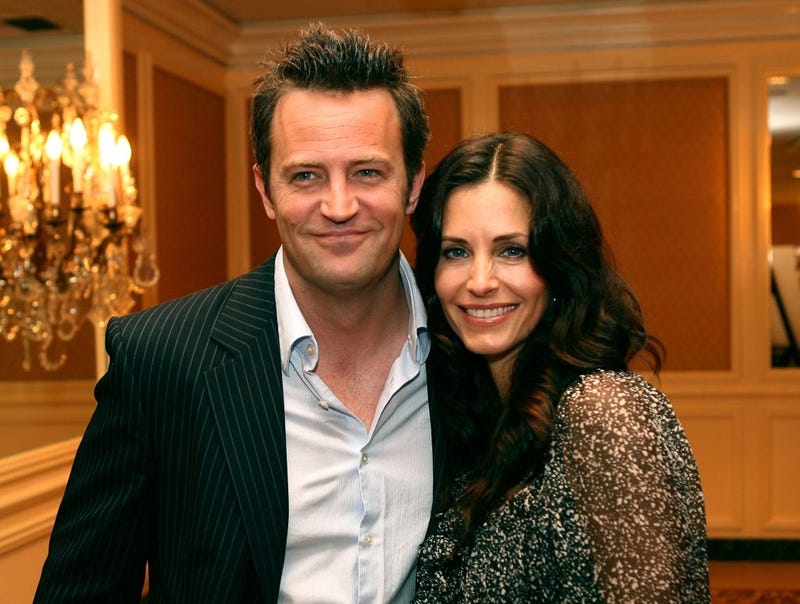 Chandler was at the Arquette family honorary night too. 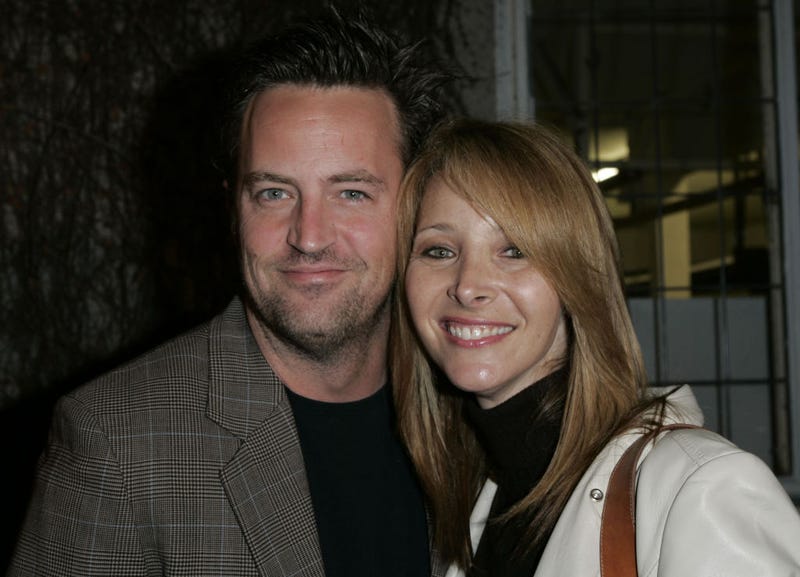 Chandler and Phoebe let the pen do the speaking at this silent auction charity in 2006. 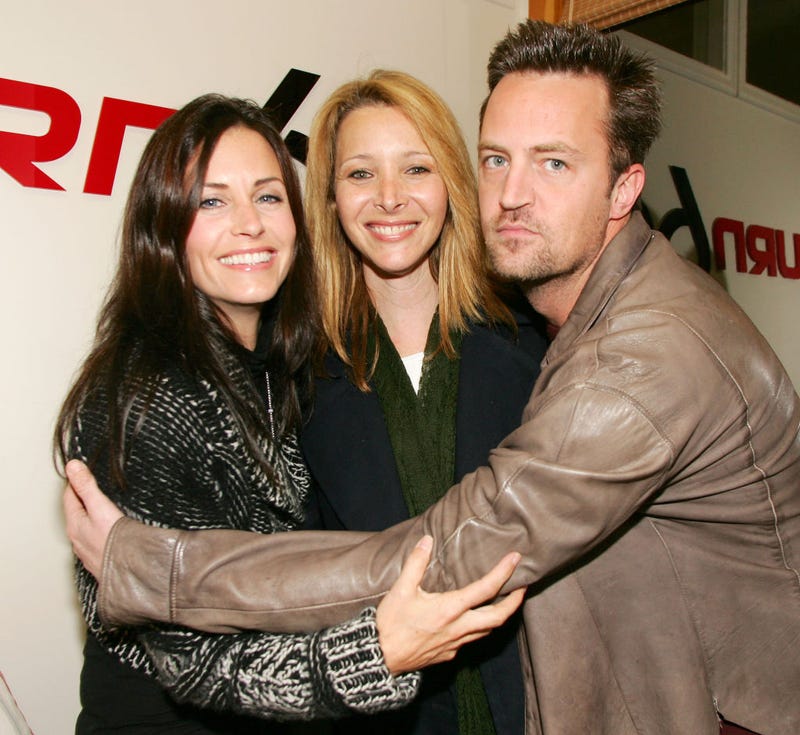 Monica, Phoebe and Chandler were feeling the burn at this 2005 opening of a Burn 60 Fitness Studio.