The Discovery Channel’s annual week of shark-themed programming has returned with a little bit of everything that fans love, including shark experts, celebs squaring off with sharks, and alien sharks.

Here’s a look at this year’s full schedule, which kicks off Sunday at 8 p.m. ET on Discovery Channel. 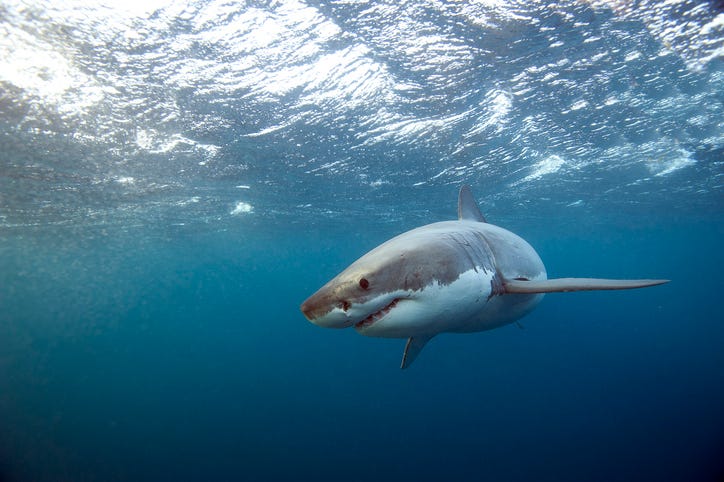 Air Jaws: Ultimate Breach Off (8 p.m. ET): Watch three teams of researchers use decoys, drones and underwater cameras to “count the number of breaches and collect data” to learn about how the shark population is rebounding.

Tyson vs. Jaws: Rumble on the Reef (9 p.m. ET): The legendary boxer goes toe-to-tail with some of the ocean’s fiercest predators while famed ring announcer Michael Buffer calls the shots.

Shark Lockdown (10 p.m. ET): The pandemic hasn’t just affected humans. Researchers built a self-propelled cage to see how the lack of human interaction during COVID-19 has affected the hunting patterns of the 20-ft.+ female great whites nicknamed “the 747s” in the waters off New Zealand. 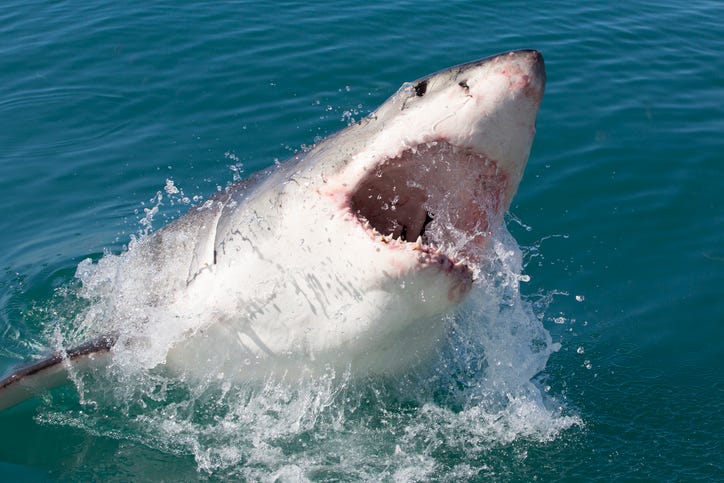 Abandoned Waters (8 p.m. ET): A lock of human interaction during the coronavirus pandemic gives researchers a once-in-a-lifetime opportunity to study the natural behaviors of the great white sharks at Australia’s Neptune Islands.

ShaqAttack (9 p.m. ET): After surviving a shark encounter in last year’s “Shaq Does Shark Week,” the legendary basketball star is back. This time, he recruits YouTube stars Dude Perfect and Mark Rober to test and uncover various sharks' "most mind-blowing hunting techniques."

Jaws Awakens (10 p.m. ET): Shark expert Chris Fallows is joined by Jeff Kurr and Dickie Chivell to search for the largest male great white shark in the world, a nearly 20-foot long, two-ton shark off the waters of New Zealand know as Fred. 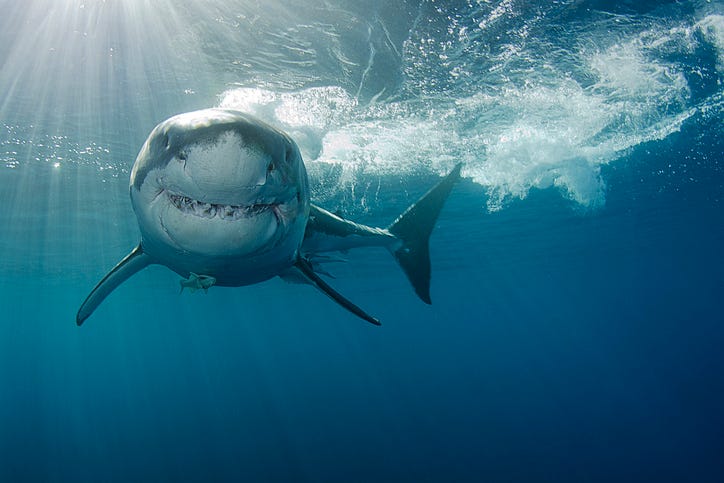 Extinct or Alive: Land of the Lost Sharks (8 p.m. ET): Join wildlife biologist and conservationist Forrest Galante as he dives into some of the most treacherous, shark-infested waters in the southern hemisphere in attempts to rediscover three unique sharks lost to science for as long as 100 years.

Will Smith: Off The Deep End (9 p.m. ET): Will Smith confronts his fear of nature’s fiercest predator, diving headfirst into action, excitement, and shark-infested waters. 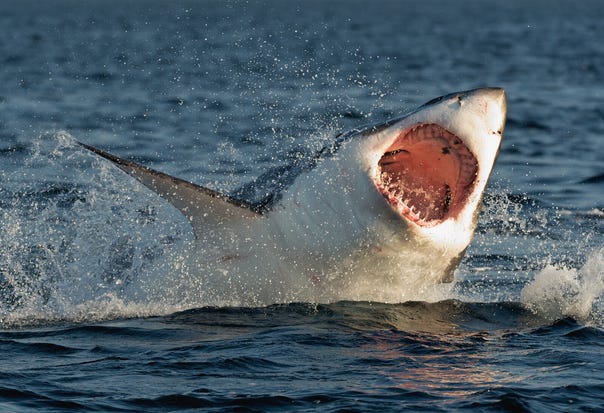 Monster Under the Bridge (8 p.m. ET): Does a 15-foot, half-ton great hammerhead named Big Moe, what would be the largest hammerhead on the planet, live under the Old Seven Mile Bridge? Scientists find out.

Adam Devine’s Secret Shark Lair (9 p.m. ET): After discovering a secret tiger shark lair believed to be the largest congregation of tiger sharks on the planet last year, Adam Devine and a team of marine biologists learn more about what he calls “the ultimate shark party.”

Great White Double Trouble (10 p.m. ET): Australia is facing an increase in shark attacks — but the perpetrators aren’t one population of great whites, but two. Researchers try to determine which one rules the waters. 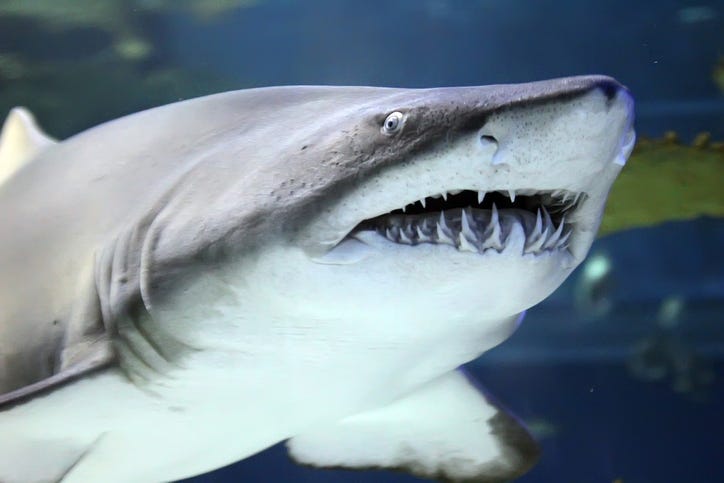 Sharkadelic Summer (9 p.m. ET): Will this be the “sharkiest” summer in U.S. history? Snoop Dogg tries to figure out why Great White Sharks are taking up residence along America's shores by breaking down the craziest shark encounters caught on tape and meeting with experts trying to unlock the secrets behind the “great white shark invasion.”

Mako Nation (10 p.m. ET): Shark scientist Riley Elliot and underwater cameraman Andy Casagrande uncover the mysteries of the mako shark in one of the last places on earth where these apex predators rule the waters. 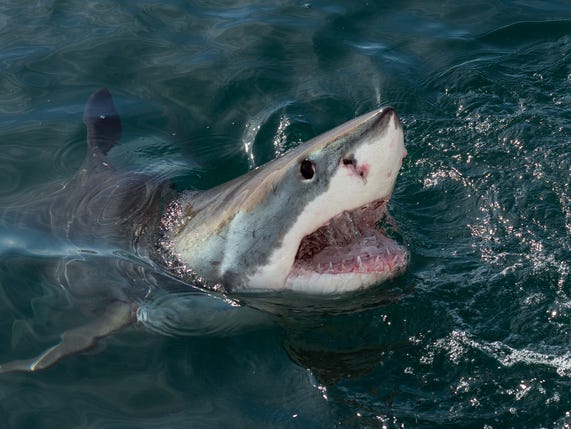 Alien Sharks: First Contact (8 p.m. ET): Mysterious and bizarre alien sharks lurk far beneath the waves in remarkably deep waters where researchers are on a quest to make first contact.

Lair of the Great White (9 p.m. ET): A team of experts brave the elements and venture into treacherous underwater caves in attempts to find out why a population of great whites off the coast of Western Australia is so much more aggressive than others.

Tiger Shark King (10 p.m. ET): A deepsea camera captured footage of a 14-foot tiger shark suffering an assault by a large, unseen beast in the Caribbean. Dr. Austin Gallagher finds out if it could be an unknown species of mega-shark or even a cannibalistic tiger shark.

I Was Prey (11 p.m. ET): A spearfishing expedition off the coast of Australia turns into a nightmare when a ferocious bull shark and a great white attacks a paddle boarder on Ascension Island. Two adventure seekers recount their harrowing shark attack experiences. 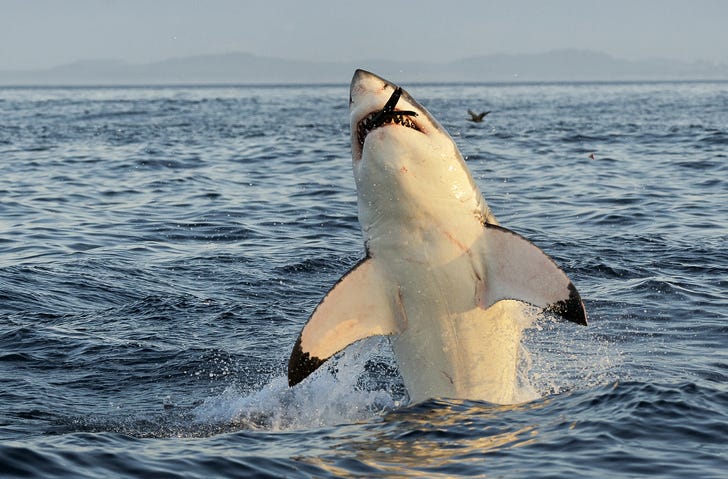 Sharks of Ghost Island (8 p.m. ET): Dr. Craig O'Connell and a team of experts return to Ghost Island, near the edge of the Bermuda Triangle, to find why this island attracts so many sharks, even the great white.

Wicked Sharks (9 p.m. ET): Shark expert Dr. Greg Skomal breaks out cutting-edge tech to find out how and where great white sharks hunt in the summer to better protect the public amid the spike in encounters on Cape Cod.

Sharks Gone Wild 3 (10 p.m. ET): Everything you always wanted to know about viral shark videos but were afraid to ask! A review of everything from viral videos and the biggest news stories to the latest in cutting-edge shark science.

I Was Prey: Terrors from the Deep (11 p.m. ET): What do a California surfer, a Canadian thrill-seeker, an Alabama football coach, and a mother from North Carolina have in common. Watch as four individuals reveal how they each came face-to-face with the ocean's top predator and lived to tell their stories. 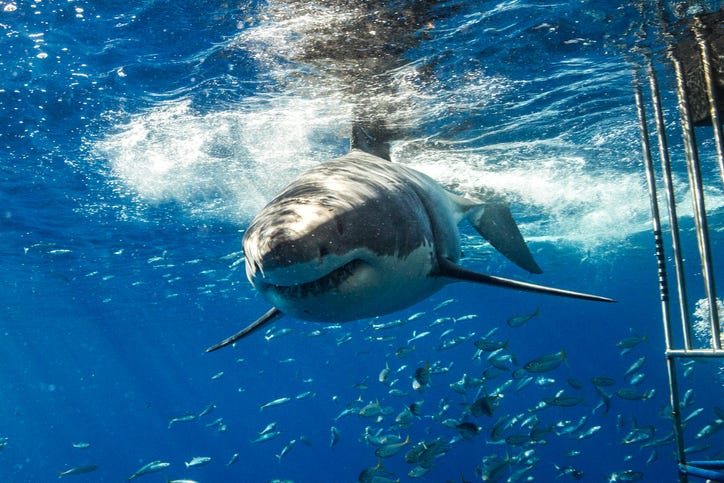 Naked & Afraid of Sharks 2 (8 p.m. ET): Five Naked and Afraid veterans attempt to survive on “Shark Alley,” a remote strip of islands on the edge of the Bermuda Triangle whose waters are teeming with predators.