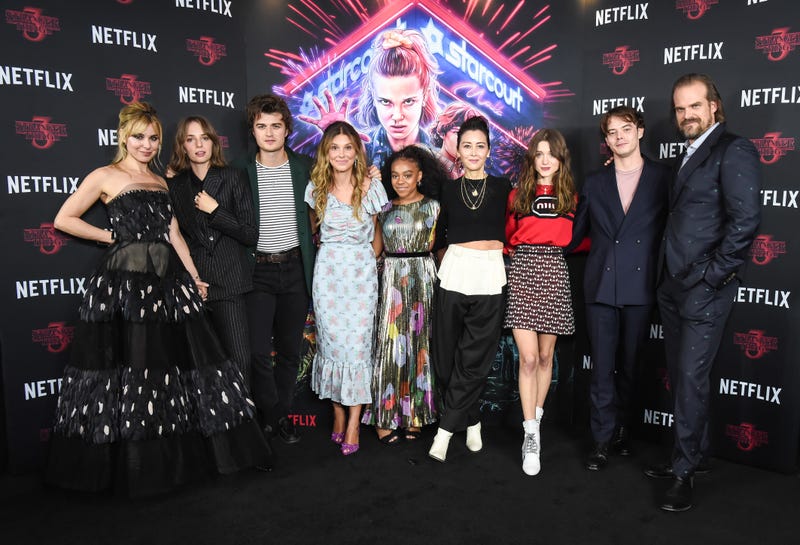 "Stranger Things" is hotter than ever.

The teaser trailer for "Stranger Things" season 4 hit the internet back in September, and while there’s still no release date, it’s hard not to be excited for the next chapter of the nostalgia-fueled, fantastical series. Fans are even already hard at work on theories about anticipated twists.

It was an exciting year for the show and the cast. But as the year comes to a close — and as Dec. 23 is the birthday of Finn Wolfhard, who plays Mike Wheeler on the show — it’s a great time to catch up with our favorite Netflix stars.

Here’s what the "Stranger Things" cast are up to these days.

Viewers got to see a lighter side of the young supernatural warrior in season 3, but Eleven’s playful moments were just a snippet of the friendly, energetic Millie Bobby Brown who plays her. The British-born actress is easily the funniest part of the show’s blooper reel. No wonder she’s so happy, becoming one of the youngest Emmy nominees ever for Outstanding Supporting Actress in a Drama Series and making her big screen debut in 2019 in ‘Godzilla: King of the Monsters.’

The 17-year-old (as of day, happy birthday Finn!) Wolfhard used his starring role on ‘Stranger Things’ to launch into a series of sci-fi horror roles including the adaptation of Stephen King’s ‘It’ in 2017 and most recently a reboot of ‘Ghostbusters’ directed by Jason Reitman (whose father Ivan directed the originals). The young actor is also a singer and guitarist in several rock bands, including Calpurnia and The Aubreys.

‘Stranger Things’ brought Ryder back into the limelight in a major way, but the show is just the latest in the Minnesota-born actress’s long career since 1986. After run-ins with the tabloids earlier in her career, Ryder keeps her personal life pretty lowkey these days, but get excited to see her star alongside John Turturro in David Simon’s ‘The Plot Against America.’

Harbour switched sides in 2019, going from a patriotic American fighting communist Russians to playing Alexei Shostakov, aka Red Guardian, who appears to be an ex-Soviet supersoldier in the trailer for the latest Marvel film, ‘Black Widow.’ In 2019, the actor also burned brightly in another comic book adaptation, ‘Hellboy.’

The classically trained McLaughlin has one of the most interesting career arcs toward ‘Stranger Things,’ beginning with the opera ‘Lost in the Stars’ and then moving on to become young Simba in the stage production of ‘The Lion King.’ Those rolls show off the actor’s musical abilities, which he has been using more and more as an R&B singer.

Dyer continued her Netflix horror career in 2019 with a role in ‘Velvet Buzzsaw’ alongside Jake Gyllenhaal. She has also made quite a name for herself in the fashion scene, attending openings and fashion week events. Fans also love the fact that she is dating co-star Charlie Heaton (Jonathan), bringing their onscreen romance to real life.

The English actor may be known for his role as the amateur photographer and sleuth Jonathan on ‘Stranger Things,’ but Heaton also casually models on the side, so be sure to follow him on Instagram for some steamy BHS shots.

Steve ‘The Hair’ Harrington is another musician-turned-actor, keeping up his role as a guitarist in the psych-rock band Post Animal alongside his acting career. In 2020 catch him starring alongside Ryan Reynolds in the movie ‘Free Guy.’

Matarazzo has been all over TV in the last couple years, not only on Netflix but also in commercials playing upon the popularity of his character Dustin. Another Broadway-trained actor, Matarazzo stars in another Netflix production, Prank Encounters, a hidden-camera show that drops unknowing people into real life horror movies.

Schnapp starred in the first season of ‘Stranger Things’ at just 12-years-old, but he has since picked up major rolls in ‘The Peanuts Movie’ and Steven Spielberg's ‘Bridge of Spies.’ But his most personal project is his very own YouTube channel, launched in 2019.

He may be a villain in ‘Stranger Things’ season 3, but the Australian Montgomery has also played the hero as Jason Lee Scott in ‘Power Rangers.’ In 2019, he released a big unexpected side project, a podcast titled DKMH in which he reads his beat poetry to background music.

The spunky actress who plays Max has also appeared on other popular TV shows like ‘Blue Bloods’ and ‘The Americans,' as well as turns in fashion shoots and on magazine covers. But she’s perhaps most endearing for her real life friendship with Brown, as evidenced by many behind-the-scenes social media posts.