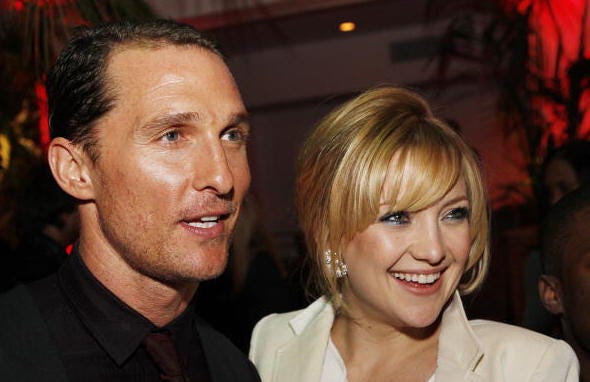 Fans of Kate Hudson and Matthew McConaughey’s first romcom pairing have something to celebrate.

The new streaming service Quibi has announced they are planning an updated series based on the 2003 romantic comedy “How to Lose a Guy in 10 Days,” according to Entertainment Weekly.

How to Lose a Guy in 10 Days adaptation coming to Quibi https://t.co/s6d2AqmnWA

Although no casting decisions have been made, it’s safe to say Hudson and McConaughey will not be returning to play their characters of Andie Anderson and Benjamin Barry.

The original storyline has been tweaked with the revival following “a glib young online columnist and an oversexed advertising executive who both need to prove, once and for all, they’re capable of being monogamous.”

In the original, Hudson played a magazine writer with an assignment to make a man break up with her in 10 days, while McConaughey was an ad executive who had to prove he could make any woman fall for him. Deception ensued.

The new version is being written by “Mindy Project” alum Guy Burnam, who jokingly revealed how the original will affect the update.

I will be observing and consulting numerous photos of shirtless Matthew McConaughey to properly research this task. pic.twitter.com/UcwcCbfUzY

“I will be observing and consulting numerous photos of shirtless Matthew McConaughey to properly research this task,” Burnam wrote in a tweet with a clip of a topless McConaughey from the film.

Hudson and McConaughey’s chemistry proved electric as the film went on to earn $177 million at the box office. The pair would later reunite for the 2008 film “Fool’s Gold.”

“How to Lose a Guy in 10 Days” isn’t the only reboot on Quibi’s plate as the streaming service previously announced they are developing an update to the 1999 film “Varsity Blues.”

The streaming service is set to launch in April 2020.