That’s the answer Ken Jennings and Brad Rutter, two contestants taking part in Tuesday’s “Greatest of All Time” episode of "Jeopardy!," offered up to TMZ when asked who would make a good replacement for longtime host, Alex Trebek.

Though he doesn’t have any desire to hang up his hosting duties yet, he alluded to doing so if he can no longer carry the torch.

With Jeopardy! The Greatest of All Time just around the corner, remember to set your DVR to record the special in addition to the usual Jeopardy! programming! #JeopardyGOAT

The 79-year-old television host also revealed that he practiced how he’d wrap up his tenured run when the day finally came. 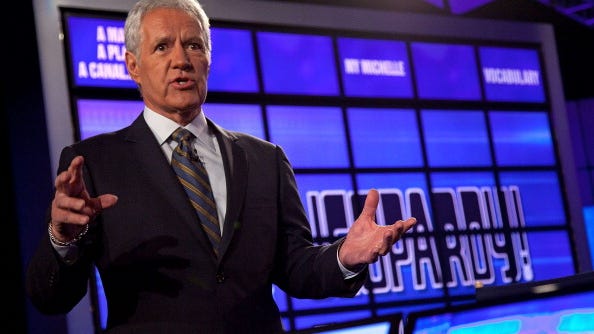 Top 3 'Jeopardy!' Champs to Face Off on Alex Trebek-Hosted Special

TMZ caught up the Jennings and Rutter, two of the biggest contestants in “Jeopardy!” history, as they were on their way to do some press for the “G.O.A.T” episode that will find them facing off against each other and bold and risky newcomer, James Holzhauer.

When the multi-night tournament was announced, Trebek told USA Today, “When James had his run last year, a lot of people were wondering, well how would he do against Ken Jennings? How would he do against Brad Rutter? (They’re) our two most successful players in "Jeopardy!" history. These three players have won close to $10 million in ‘Jeopardy!’ prize money and over 100 games among them, so it was logical.”