Since Larry King's passing on Saturday at the age of 87, fans and friends of his alike have come together to round up tributes and memories of the late talk show host.

One such person is Wendy Walker, the longtime executive producer on "Larry King Live" In an interview with Billy Bush, Walker outlined the exact thing that made her "nuts" about producing the show. 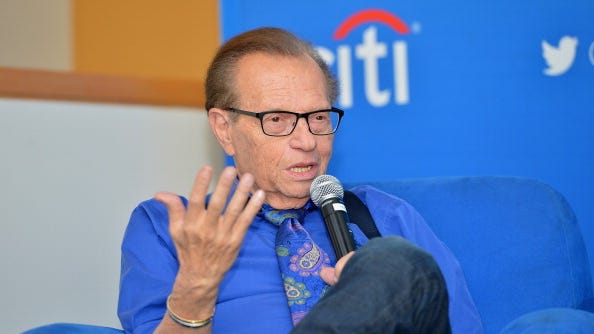 When asked by Bush what it was that made her crazy about working with Larry King, Walker's answer was simple. "Baseball... This man would go on all day long, all night long if he could," Walker said.

However, despite the baseball obsession, there were things about King that made him a pleasure to work with. Most notably was his listening skills. "He always said he never learned anything while he was talking; he always kept his questions super short," Walker shared.

"He listened - he always listened to his guests... Another important thing, he never made it about himself." she continued.

And even thought King was a master of the interview, he still faced some backlash occasionally. "Sometimes he got criticized for not asking the 'gotcha' question. He made it an environment where people could just be themselves and talk," Bush added.

Walker replied, "I think the reason people felt comfortable with Larry is because he didn’t have an agenda. It didn’t matter if it was a president or a man on the street — he treated them all the same."

She continued, "I got excited when we had a big get. He didn’t… When you go into an interview like that, not thinking you’re going to nail this guy to get the big scoop, that’s when people open up, so I always loved it when we got that rap. We got more guests… There was always news on ‘Larry King Live.’”