Netflix has unveiled the first footage of its latest original series, “Locke & Key.”

It’s been a long and twisted road for the comic-book adaptation, as it was bounced around by networks and streamers for years before finally getting it right and finding a home with the streaming giant.

Now, Netflix hopes to lock you in for the ride by overloading your senses with a mysterious spooky house, magic keys, and a supernatural adventures all rolled into one.

The first trailer for the whimsical series introduces the Locke siblings, who move into their ancestral home following their father’s murder and begin hearing voices that urge them to find various keys hidden around the house.

“This isn’t a game. We don’t know what these keys unlock,” one of the siblings warns.

In addition to unlocking secret passageways, the trailer reveals that the siblings have also awakened an evil spirit who wants to get her hands on the keys.

The ten-episode series is based on Joe Hill and Gabriel Rodriguez’s graphic novel of the same name. 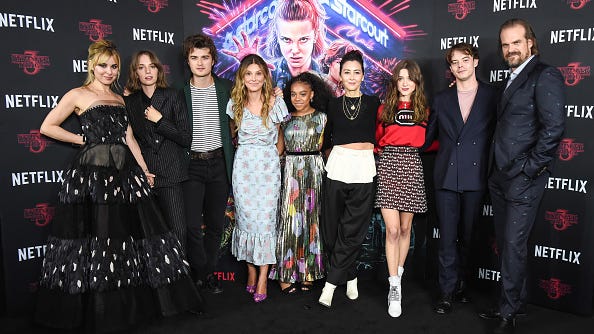 “This is giving me 'Narnia' + 'Haunting of Hill House' vibes,” one Youtube user commented after the trailer was released.

“So happy Netflix picked this up, looks amazing!,” another rejoiced, while a third user added, “the trailer is everything I wanted and more.”

The trailer ends with a hidden message that leads to the website “RendellLockeIsDead.com,” where curious fans will find a sneak peek of the show’s first official scene.

Unlock the mystery when the series drops on February 7, 2020. Check out the other shows and movies you can binge-watch on Netflix this month.