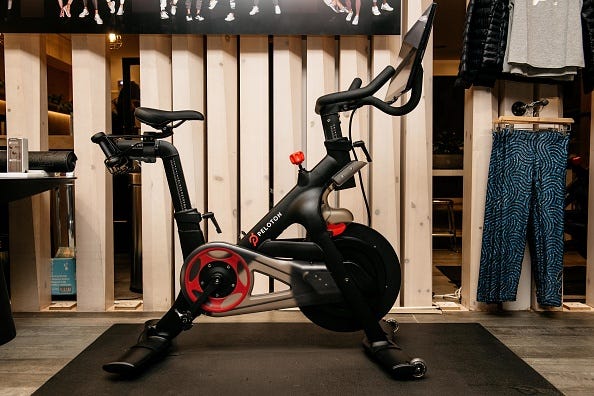 The Canadian actor who gained notoriety for playing the husband in the controversial Peloton commercial — and has since fully embraced being being referred to as the “Peloton Husband” by using it for his Instagram handle — gave his real-life girlfriend one of the brand’s expensive workout bikes.

Here’s hoping this goes over better the second time.... Merry Christmas to my actual girlfriend (pls don’t leave me)🎄🚲

Perhaps in an attempt to once again go viral, Sean Hunter shared a snap alongside his boo, Cassidy Baras, who smiled while sitting on the new exercise equipment.

“Here’s hoping this goes over better the second time....,” Hunter captioned the snap which referenced the polarizing ad. “Merry Christmas to my actual girlfriend (pls don’t leave me).”

Last month, Peloton released the 30-second commercial, entitled “The Gift That Gives Back,” which features a husband (Hunter) gifting his slender wife a Peloton stationary bike for Christmas. After documenting the workouts over the year, the clip ends with the husband and wife watching her fitness diary together.

The ad quickly took the internet by storm amid calls that it was “sexist” and “tone-deaf.”

While it racked up millions of views, it also led to a 15% plunge in the company’s stock.

Hunter spoke out following the backlash, which had some declaring him “the face of the patriarchy.”

“I pride myself on being a great teacher and developing actor, and I can only hope that this affects neither,” he said. “I’m grappling with the negative opinions as none of them have been constructively helpful.”

Meanwhile, Hunter’s co-star Monica Ruiz, aka “Peloton Wife,” took some of the blame for the ad’s negative reaction.

"Honestly, I think it was just my face,'' Ruiz jokingly said. "My eyebrows looked worried I guess. People were like, 'You look scared.' I'm telling you, it was my face, that was the problem.”

But those “worried brows” appear to have paid off for Ruiz.

Following the controversy, Ruiz was tapped to reprise her role in an ad for Ryan Reynolds’ liquor brand Aviation Gin, which served as an unofficial sequel to the Peloton ad.

A few weeks later she scored a two-episode gig on the CBS soap “The Bold and The Beautiful,” which will air in January.