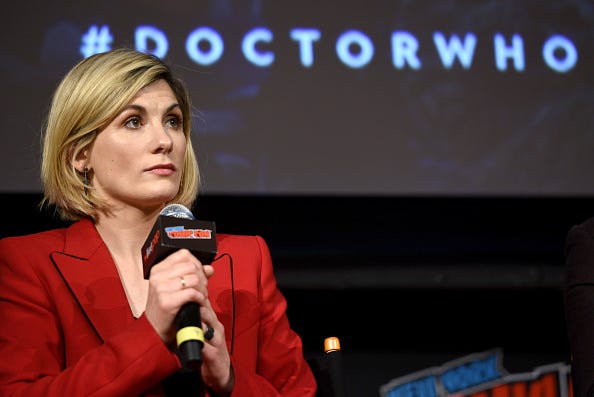 “The name’s Doctor. The Doctor.”

The highly-anticipated trailer of “Doctor Who” opens with a tuxedo-clad Doctor making a James Bond joke teasing the action-packed 12th season.

From there, the BBC trailer continues to intensify as it reunites fans with Jodie Whittaker’s kooky and first female Doctor.

Whittaker returns for her second season as the titular character.

The trailer debuted on November 23, the same date that the very first "Doctor Who" episode aired 56-years ago.

Coming along for the ride are the 13th Doctor’s companions Yaz (Mandip Gill), Ryan (Tosin Cole), and Graham (Bradley Walsh), along with the Doctor’s old nemesis, the Cybermen, who won’t hesitate to create plenty of problems for the Time Lord.

“Something’s coming for me, I can feel it,” the Doctor says as she gears up to face new and old threats.

Amongst those threats is the return of the Judoon (rhino-human aliens), the Racnoss (half-human, half-spider race of aliens), and the introduction of a menacing swarm of black birds.

No stranger to time-traveling shows, “Timeless” actor Goran Visnjic is one of the guest-stars revealed. Others include “Paranoid’s” Robert Glenister and “Broadchurch’s” Lenny Henry.

The return of "Doctor Who" is teased with the extremely vague "early 2020" release date.

Hopefully, that means the wait is almost over.

The new season will air on BBC and BBC America.

Remaining seasons will stream exclusively on HBO Max when the streaming service launches in the new year.