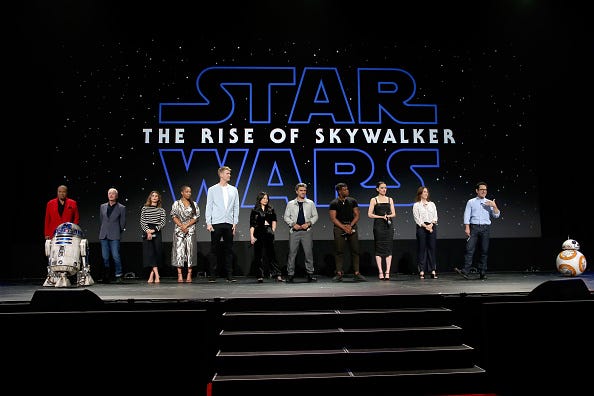 Phew! That was a close one!

Disney avoided a catastrophic spoiler alert after the script for their final installment of the “Star Wars” franchise, “Star Wars: The Rise of Skywalker,” got into the wrong hands.

The highly-anticipated film was almost leaked to the public after the script was posted for sale on eBay.

Director J.J. Abrams told the Los Angeles Times about the snafu that happened when one of the film’s stars accidentally left the script behind in their hotel room.

Abrams admitted that the actor mistakenly “left [the script] under their bed and it was found by someone who was cleaning their room.”

Of course, when you find yourself with such a prized possession, the go-to move is to try to make a quick buck.

Abrams added that the script was handed over to someone who then listed it on eBay.

While Abrams didn’t divulge which actor was responsible, Entertainment Weekly narrowed it down to either Adam Driver or Daisy Ridley since they would likely be the only ones with a script considering how careful Disney is about preventing plot-leaks.

“They were really nervous about anything getting out,” Abrams told Good Morning America Monday adding, “They had only a handful of scripts, and they were printed on crazy, uncopy-able paper.”

Thankfully, this story has a happy ending thanks to an eagle-eyed Disney staffer who somehow recognized the script online and purchased it before it could be scooped up by someone with more nefarious intentions.

The staffer should be hailed as a hero for preventing a devastating movie leak.

“The Rise of Skywalker” marks the end of the “Star Wars” franchise.

The film will debut in theaters on December 20.