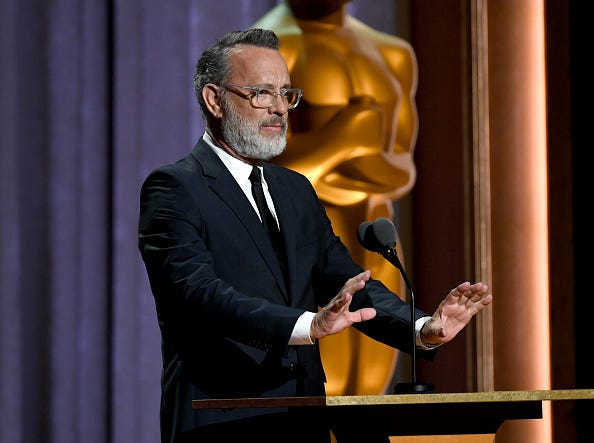 Tom Hanks may be one of the most famous and most recognizable actors on the planet, but apparently, not everyone knows who he is.

On a recent episode of “Jeopardy!,” all three contestants failed to identify Hanks, who currently stars as beloved children's TV show host, Mr. Rogers, in the biopic, “A Beautiful Day in the Neighborhood.”

The moment left viewers at home and on social media flabbergasted.

The good news is that Hanks had the same reaction as everyone after seeing the viral clip during an appearance on "Jimmy Kimmel Live!"

"They didn’t even have any wrong suggestions? Bing, Woody Harrelson? Bing, Mahershala Ali?," he said laughing in disbelief.

Hanks couldn't contain himself adding, “What was the name of the category? Washed up career choices for 800? Bad casting for 1000, Alex?”

Kimmel gave the only logical explanation, “I look at it as you inhabited that character so beautifully that even they were absorbed instantaneously!”

The explanation was good enough for Hanks who added, “OK, I’ll take that, I’ll take that. Thank you!” before making one final joke, “I think actually they were blinded by the red sweater. They couldn’t make anything out.”

During the same appearance, he reflected on the role telling Kimmel that wearing the signature red sweaters was the equivalent of putting on “Batman’s cape and cowl” in Rogers’ hometown of Pittsburgh.

Beverly, the contestant who initially picked the "Biopic" category, eventually managed to hit her buzzer, but it was a second too late.